Exactly one hundred years after Hugo Ball and Emmy Hennings started Cabaret Voltaire, Zürich was once again the stage of an art revolution. This time it wasn’t Dada, however, but data. On February 13, 2016, The Museum of Digital Art opened its doors on the ground floor of the monumental Herdern Hochhaus. It’s the first physical and virtual museum dedicated to digital art in Europe. Worldwide, there are only a few institutions like it, most of them American. There is, of course, the pioneering Austin Museum of Digital Art (AMODA), founded in 1997 and embellished with a full-fledged exhibition program five years later. And on the West Coast the Los Angeles Center for Digital Art (LACDA) has been going strong since 2006.

The fact that these are brick and mortar entities is more significant than one might think. Their physical nature allows them to showcase a much wider range of artworks than any of the online museums dedicated to digital art. Those have been around since the start of the World Wide Web and include the Museum of Computer Art (MOCA, since 1993), the Digital Art Museum (DAM, since 1999), and the Digital Museum of Digital Art (DiMoDA, since 2015). They are quite proficient at documenting the fifty-plus-year history of digital art and often put on virtual exhibitions. But the curating and staging is limited to the screen, so what you’re looking at is basically net art or documentation. Lenticular prints, 3D-printing, animatronics, and all other varieties of art involving computers in the creation process are excluded. That makes for a very narrow interpretation of an art form that keeps redefining its boundaries as technological evolution speeds forward.

Another great advantage of a building with the word “museum” on the façade: it’s much more visible. Whereas digital traffic tends to become compartmentalized by algorithms feeding us information tailored to our personal preferences and previous behavior, a physical structure is less easily overlooked. Moreover, it’s potentially a place where people meet and interact, thus investing the art on display with the humanity necessary for it to be accepted and adopted by the public at large. (This is not to say that online interactions concerning digital art are inauthentic or lack human presence, but they are typically confined to communities who are already aware of or sold on the medium.) Still, while attempting to help along the emancipation of digital art, the museums dedicated exclusively to it tend not to grow beyond the status of oddity. They are well outside the mainstream and attract mostly techies and art geeks, largely failing to cross over into the regular museum-going crowd.

Traditional museums, on the other hand, are extremely slow on the uptake where digital art is concerned. While our everyday lives are increasingly saturated with digital technology and many feel it’s nearly impossible to even imagine life before the internet, smart phones, and laptop computers, we see very little of that when entering a museum. Some institutions do organize exhibitions by digital natives, post-internet artists, or whatever label they choose to categorize digital artists under, but these tend to be one-offs. The Whitney Museum in New York dedicated a retrospective to Cory Arcangel in 2011, when the artist was still in his early thirties. Chris Bodman curated a number of important shows at the Barbican and Tate Modern in London. And right now, the Kunsthal in Rotterdam is presenting the Hugo Brown family’s digital art collection: a worthwhile presentation of works produced and collected over the last decade and a half. But after these shows close, the flat screens and heavy-duty hardware go back to the rental shop and the works are returned to their owners. 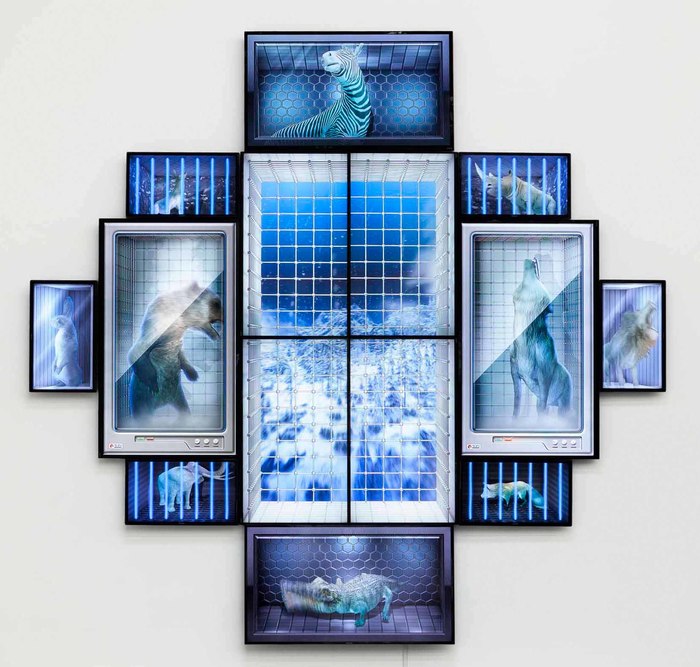 The number of general art museums collecting digital art on a regular basis is negligible. In recent years MoMA has been catching up, but most of its acquisitions are in the realm of pixel icons and antiquated videogames like Pac-Man, Tetris, and SimCity. Worldwide there is basically only one museum with a sizeable digital art collection spanning the entire history of the medium, and that is, perhaps surprisingly, the Victoria & Albert Museum in London. The museum owes its wealth of digital art to the donation of two private collections: the Computer Art Society Collection and the Patric Prince Archive. Although the V&A regularly stages digital art exhibitions, it too fails to integrate this facet of its collection with the rest and make it part of the museum’s DNA.

One could argue there’s no urgency for the V&A to do so: the museum is primarily known for its vast and excellent collections of fashion and design, and presents itself as such. Why develop a new USP when you already have one? The V&A is in the luxury position not having to rethink its position in the light of technological evolution. This is not the case, however, for quite a few modern and contemporary art museums. For them, focusing on digital art could be a strategy to strengthen their position in an increasingly competitive market.

Case in point is the Stedelijk Museum Amsterdam. In the period following World War II this institution qualified as one of the world’s top modern art museums. It was one of the first to embrace photography as a legitimate art form, acquired absolute masterpieces by German and American abstract painters and conceptualists in the sixties and seventies, and classifies as an early adopter where video art is concerned. But in the late twentieth century it was overtaken left and right by museums with bigger budgets and more decisive directors. A complicated overhaul and expansion of the building, which took five years, was supposed to help bring the Stedelijk “back into the Champions League of museums,” as then-director Gijs van Tuyl put it. This is not achieved by focusing on twentieth century art, however. In a world where the likes of the Al Thani family dominate the art market and don’t think twice about spending millions of dollars to procure the latest Cézanne, Rothko, or Warhol at auction, a museum like the Stedelijk doesn’t stand a chance. 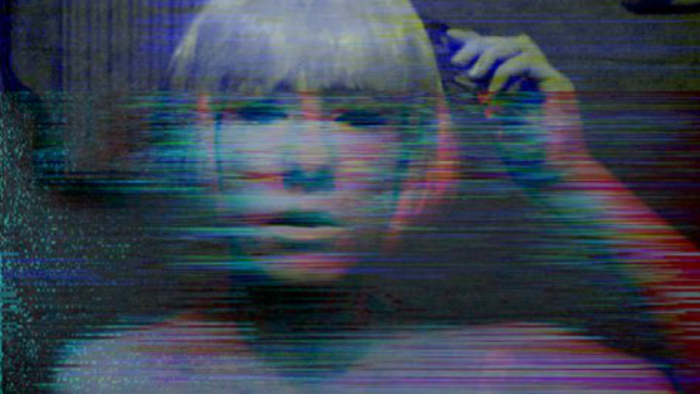 It could make a killing in the digital art market, though. This type of art is still relatively cheap. Its makers are eager to acquire recognition by formal art institutes and are probably willing to set aside exclusive works for museums. Even early net art from the 1990s is quite easily obtained. With a modest but earmarked budget the Stedelijk could quickly assemble a consistent and coherent digital art collection, which it could deploy to revitalize its image and redirect its course, setting it apart from the rest of the museum field, ahead of the competition.

Not only would such a digital art collection boost the Stedelijk’s contemporariness, it could also refresh its permanent collection. The museum has been experimenting with new ways of presenting the collection, most notably in the 2014 Matisse show, which mixed up a monographic blockbuster with more or less forgotten treasures from the storage rooms. How great would it be to see Dominik Starch’s flickering screens combined with color field paintings by Ellsworth Kelly, Cécile B. Evans next to surrealists, or Petra Cortright dialoguing with Claude Monet? These combinations—and these are only some of the most obvious—could provide a “point of entry” for a new audience, viewers conditioned by a digital visual culture. By incorporating their aesthetic and everyday frame of reference, the museum could reinsert itself in contemporary life and regain a sense of urgency. 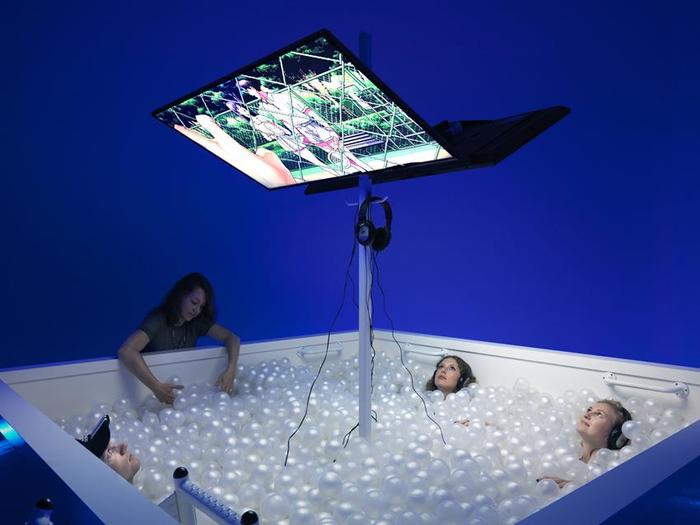 Already the Stedelijk is on the right path. High profile exhibitions like Ed Atkins’ 2015 Recent Ouija show and the current Jordan Wolfson diptych bring the 21st century into the museum. And in December 2016, in partnership with MOTI, the Museum of the Image in Breda, the Stedelijk announced its acquisition of seventeen digital artworks by artists ranging from 1990s pioneers JODI and Dutch greats such as Constant Dullaart and Jan Robert Leegte to international mainstays like Jonas Lund and Jon Rafman. But more could be done, and should be done. Digital art should be fully integrated in the presentation of the permanent collection so as to persuade private collectors to donate their works or even help fill in the blanks. Moreover, digital artists should be actively invited to co-curate exhibitions the way Director Willem Sandberg once opened up the doors to CoBrA members, kinetic artists, and other avant-gardists which resulted in legendary exhibitions like Bewogen Beweging (1961) and Dylaby (1962). Digital art could function as a prism to look at both the museum’s collection and society as a whole. It could catapult the Stedelijk not only back into Champions League position, but into the heart of contemporary life.