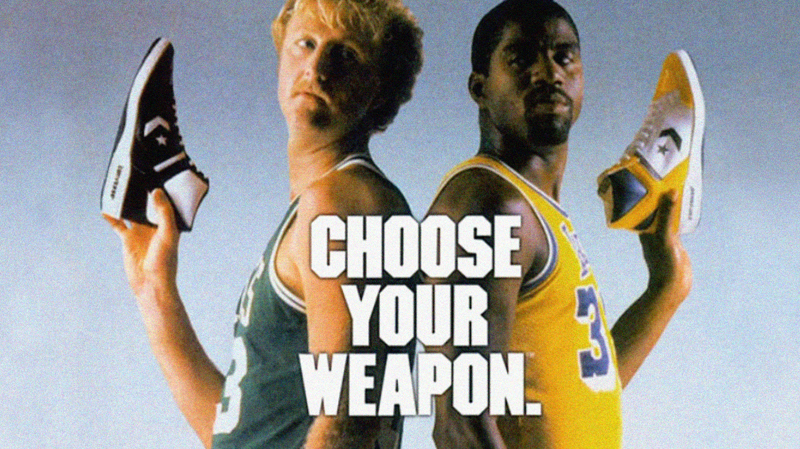 From Deep and the Rise of the Dunkadelic Era

The first three weeks of April in Toronto are host to the 27th incarnation of the Images Festival, which bills itself as the largest festival in North America for "experimental and independent moving image culture." It offers a much needed and relieving, counter to the Toronto International Film Festival. The Images Festival focuses primarily on video art, far too often only seen in the rarefied spaces of contemporary art galleries, and smaller independent films that would perhaps not be showcased otherwise in the normal film festival circuit.

The Images Festival 2014 offers a compelling variety of work to satisfy a broad range of interests, all outside the usual mainstream fare. It comprises eighty plus films and artworks selected by Artistic Director Pablo De Ocampo and programmer Kate McKay from approximately 1800 submissions, including works solicited from artists and films from other fairs and distributors. This year three projects, Andrew Lampert's Making Space for More, Lucy Raven's Curtains, and Taku Unami's Violent X were commissioned and/or produced by the Festival and are being shown for the first time in Toronto.

The Toronto International Film Festival tends to be the highlight of Toronto's annual film culture, and it's questionable as to whether or not this is related to content, or because it attracts Hollywood celebrities to Toronto. Canada has always had a love/hate relationship with US entertainment culture, at once disdainful and enamored of it. TIFF generally, as it's covered in the media, is more about Brad Pitt or Denzel Washington being spotted eating at a popular Toronto bistro and less about the film programming. It's a sadly endemic aspect of Canadian culture that we value our cultural assets and our own territory most when it's been validated by American celebrity culture. Images offers a vital, refreshingly earnest focus on content over appearances. Supported and funded in part by Canadian corporations and covered by all manner of local media, Images Festival keeps the focus on art, rather than accoutrements and personalities. With a specific focus on promoting and nurturing those using video as a format to make artwork, not necessarily films, it includes work that might be too oblique or difficult for ordinary filmgoers. In this way the Images Festival has sustained a sense of integrity for almost three decades without succumbing to the usual traps and missteps that long running cultural endeavors tend to fall into. 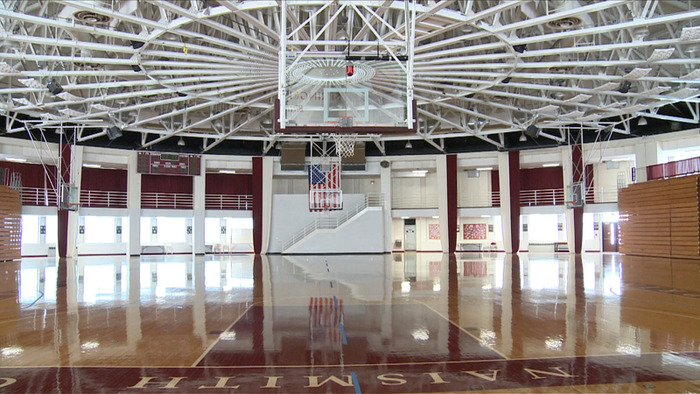 Still from the film From Deep. Directed by Brett Kashmere.

This year the film that really stood out was From Deep by Brett Kashmere, a piece that felt tailor-made for someone like myself. I was born in 1974 and grew up with the birth of hip-hop; at ten years old I was breakdancing when I wasn't playing basketball. Kashmere's film, which features incredible footage from both hip-hop and the NBA, chronicles the rise of rap music and the golden era of late eighties/early nineties basketball, which saw the Detroit Piston's dynasty, the emergence of Michael Jordan, and the many crossovers between the two cultures. Kashmere obviously loves his subject. The film has a certain obsessive fan quality in the effort put into charting the confluence of the NBA, Spike Lee's early collaborations with Nike in creating Mars Blackmon (whose cards and t-shirts I collected in early high-school), and the general growing up together, and growing pains of, basketball and hip-hop. Kashmere describes the film as shifting between "essay and mixtape," which is an accurate description of From Deep's feeling. Part tribute and part investigation, Kashmere looks at what it was like to grow up white in the suburbs during this time. If you weren't interested in skateboarding and felt disenfranchised, then you were drawn towards the nascent hip-hop scene via early exposure to films like Beat Street and Wild Style which exposed the creative and exciting world of graffiti, breakdancing, and rap.

In the late eighties and early nineties, if you weren't drawn to hockey, or rock music, black culture offered an incredible world that many suburban white kids felt a kinship with. For many of us—Kashmere himself grew up in the Canadian prairies—it became a lifelong interest that came to include, through research and retrospection, free jazz, the Black Panthers, basketball, and hip-hop. To be an alienated white teen, a desire for something to struggle against is almost an inherent characteristic. In the face of no real enemy of our own, many of us took on the attitude and politics synonymous with urban black American culture.

Kashmere does an excellent job analyzing the race clichés inherent in basketball films of this era, such as White Men Can't Jump: the white player typically being a farm-boy, playing stoically behind a barn by himself, and usually a great three-point shooter. Black players in these films tend to be flashy, playing in schoolyards with friends, with a lot of showiness and trash-talking, gold chains and fresh gear. This paradigm is repeated in many films touched on in From Deep. Kashmere points out the parallels in the real world of the NBA, where white players like Larry Bird and John Stockton are known for their humility, quietude, and, great shooting. Their black counterparts, people like Allen Iverson and Michael Jordan are known for their love of showmanship, baroque footwork, and flashy outfits. The comparison is instructive in that it demonstrates a systemic racism of types at play in a game that is often the pastime of many poor and lonely kids with a ball and hoop, regardless of color. Rap music, as the film shows us, was instrumental in popularizing the NBA and drawing in a wider audience. Eventually rap music became emblematic and problematic for the NBA; too many black players had grown up playing in schoolyards, playing with hip-hop. Once these worlds became intertwined visually—players with swagger, chains, and tattoos, dressing and acting like anyone else who'd had a similar cultural experience—the NBA became worried about losing its primarily white audience. The players looked too much like the gangster stereotype white America was so terrified of, and eventually the cultural signifiers that had helped the NBA gain popularity had to be shut down. No more chains, no more headbands, no more finger wagging, no more flashy sneakers. Hip-hop had helped the game to become a more vibrant form of entertainment for the masses, but at a certain point that vibrancy became too vivid, too representative of the black culture white America would cross the street to avoid. It was all shut down; the NBA wanted black players to look and act as the white farmboys did: stoic, quiet, humble, great shooters.

Kashmere refers to a line from Notorious B.I.G.—"either you're slinging crack rock or you got a wicked jump shot"—then goes on to show numerous examples of the same sentiment expressed in basketball films of the era (The Wood), demonstrating that this was (is) indeed the stark reality for many young black men growing up poor in America. In Do the Right Thing, Giancarlo Esposito's infamous character Buggin' Out goes ballistic on a white Brooklyn resident wearing a Larry Bird jersey for stepping on his "brand new Air Jordan." This is a signal moment for Kashmere; the intersection of Michael Jordan, Spike Lee, and Nike, created a union between basketball and hip-hop. Air Jordans were the status shoe at the time for anyone who loved hip-hop, and the white, Brooklyn resident scuffing the shoe while wearing a Larry Bird jersey (the Boston Celtic's white hero and concomitant enemy of rap music) was emblematic of race tensions as they collided with corporate status symbols in early nineties black culture. 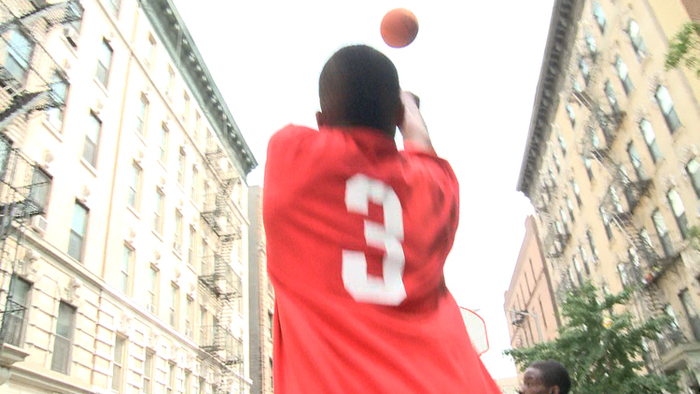 Still from the film From Deep. Directed by Brett Kashmere.

Kashmere makes many interesting observations about the convergence of basketball and hip-hop at the time. When they ABA (a predominantly black league) was absorbed by the NBA, the proportion of black players increased dramatically. Street style, which had not been seen beforehand, became predominant. Many black players being so much taller than their white counterparts (for complex and upsetting reasons related to slavery and eugenics) elevated the game to a point where it was often played above the rim. Traditionally white basketball skills like three-point shooting took a backseat to slam dunks, which offered much more entertainment. There is a sense that black players are fetishized, but also feared. Kashmere observes that most coaches and team owners are white. One relationship that offers an instructive example of the frisson between black and white in the NBA is white coach Larry Brown of the Philadelphia 76'ers and his constant struggle to "control" and deal with difficult, tattooed, "thug" superstar Allen Iverson, who refused to come to practice and had his rap album quashed by NBA commissioner David Stern.

In the 1980s, when rap was becoming the most popular form of music in America, and many people were using cocaine, Kashmere points out that the attitude of the general public was that black players were spoiled millionaire drug addicts. This positioned black athletes as a type that America was comfortable and familiar with. Flashy, spoiled, involved in drugs. In fact much of the eighties was about being flashy, spoiled, and involved with drugs. Across the board. The film points out other facts which may not be as well understood. Players are essentially owned by the league, no matter how much money they make; their careers can be notoriously short (ended in an instant by an injury); players who may have been living in a city for years, raising children in Chicago for example, owning homes and having friends and a community, have no choice whatsoever but to pack up and move across the country overnight if they are traded. In this way the film points out that as much as basketball has embraced hip-hop when it's been financially viable, as much as a basketball court may appear to be one place where white and black athletes are treated equally, there is still a deeply engrained and problematic aspect of ownership and fetishization of black athletes (not that white players are not also subject to trade at a moment's notice). Professional basketball in America embraces blackness, as long as that blackness is not the sort that white Americans have traditionally found threatening. In this regard there is an insidious and old-fashioned attraction/repulsion element inherent in how basketball is marketed and sold to the world.

From Deep is the sort of film I hadn't known I'd wanted to see, but when I did, I realized I had been waiting for someone to make it. Combining copious amounts of research and footage, Kashmere does an incredible job chronicling the importance of what was a complex golden age for culture. Something happened during those decades that had not been done before, and hasn't been done since: the creation of an aesthetics from the collision of sports, music, industry, and visual culture.

(Image on top: Still from the film From Deep. Directed by Brett Kashmere)