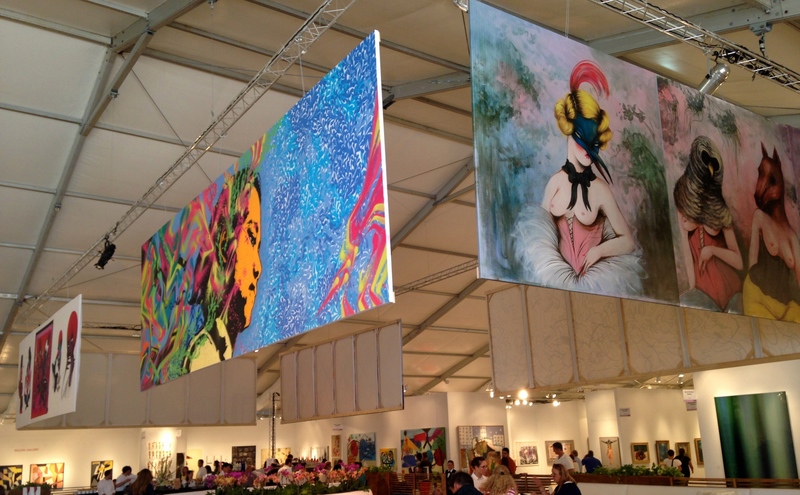 Street art happens on the street. Shaped by the urban landscape, graffiti draws attention to social injustices; it's a form of protest in art, ephemeral and non-commodifiable. Recently, urban art has been gaining the attention of the mainstream art market, an evolution that was evident Art Wynwood 2014. While the art now happening inside is no longer street art, street artists are moving indoors, adapting the subject of their art to a difference audience. About the strong presence of urban art at the fair, director Nick Korniloff said, “It’s reflective of the community where the fair takes place, the Wynwood Arts District. It’s also the next great movement in the contemporary scene. It’s extremely relevant. Personally, I have a passion for it. Professionally it makes sense.”

At the fair’s VIP Preview on Thursday February 13th, a creative, international crowd gathered at the Wynwood Pavilion, a giant all-white tent with “art wynwood” written over the entrance in blue lowercase letters illuminated by spotlights. The colorful attendees and the high-quality, dynamic art they brought to Miami countered the simplicity of the naked exhibition space. Even the VIP crowd’s outfits displayed their artistic taste. One fair-goer was dressed in a fitted light blue suit with red square-rimmed glasses, hair slicked back, nerdy, and to the side, reminiscent of Phillip Seymour Hoffman as Truman Capote. Another wore a tweed purple and pink jacket with feathers pluming from the neck. The flamboyant crowd from the art fair, wandering into the nearby Midtown Shopping Center, that shiny emblem of consumerism  (there’s a Target and a Marshalls there), located at the end of the urban art neighborhood in Miami, was easily identifiable among the more “non-artsy” locals.

Many of these Art Wynwood 2014 participants included international guests from the over seventy galleries from all over the globe exhibiting at the fair. The galleries displayed eclectic works of American Modernism, colorful pop art, surrealism, Cuban art, sculptures, and photography. Some attention-grabbing pieces, like Mitsy Groenendijk’s Kindred Spirit from the Witzenhausen Gallery in Amsterdam, stretched one’s definition of art. The thought-inspiring installation consisted of two monkeys holding hands wearing blue polka-dot aprons. The affectionate Simian sculptures evoked notions about evolution, civilization, and human beings’ distinction from animals. Ironically, art itself distinguishes us from our hairier “ancestors.” 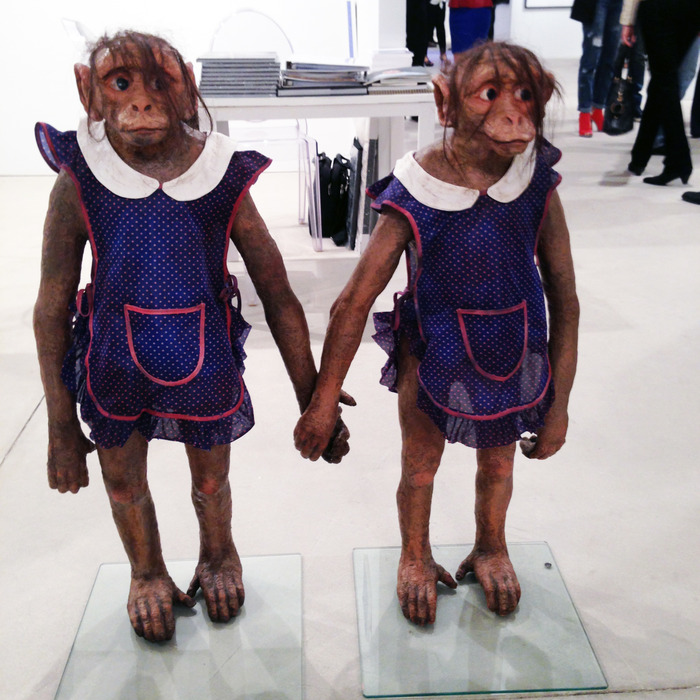 But, who can define art? The question is especially pertinent to the current urban underground art movement, which infused Art Wynwood 2014 with raw, young, and electric energy. According to Korniloff, “guests will see a completely different type of ambiance and energy around this Art Wynwood than they’ve ever experienced. There will be several works in the progress by top street artists, which will make for a lively atmosphere. It’s a full day’s experience.”

One of the live works in progress was commissioned by Waltman Ortega Fine Art from France. Artists Christian Volckman and Raphael Thierry (C&R) created the painting Launch Time at the fair, displaying their talent to fair-goers, painting black and white faces of a series of serious-looking men in suits, black ties, hats, and sunglasses. The evolution of the piece was filmed and shown on a flat-screen television next to the completed painting. 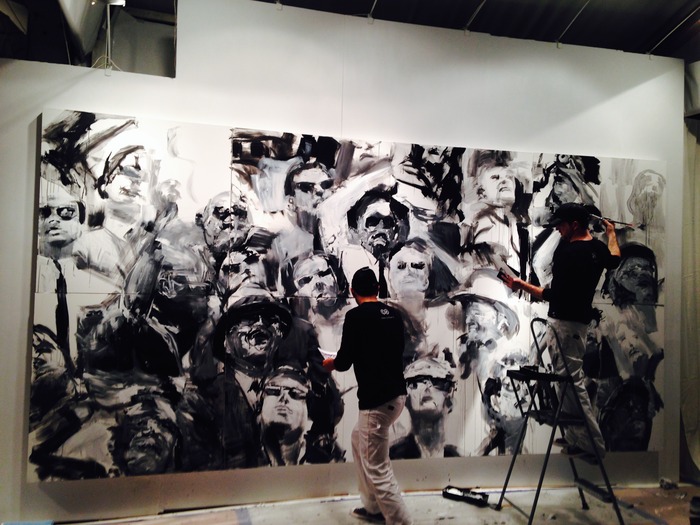 Pioneer of French street art Speedy Graphito was another focal point at Art Wynwood 2014 with his works depicting American icons and popular, consumerist culture. He painted the mural Escape on-site; the mural consisted of large colorful old-school tagging letters as the background behind a surreal patch of sky, where, those lovable American icons of consumerism, Mickey Mouse and Donald Duck appeared as blue-collar, high-rise wall painters. Fairgoers stood watching the graffiti artists painting live as if on a real street. 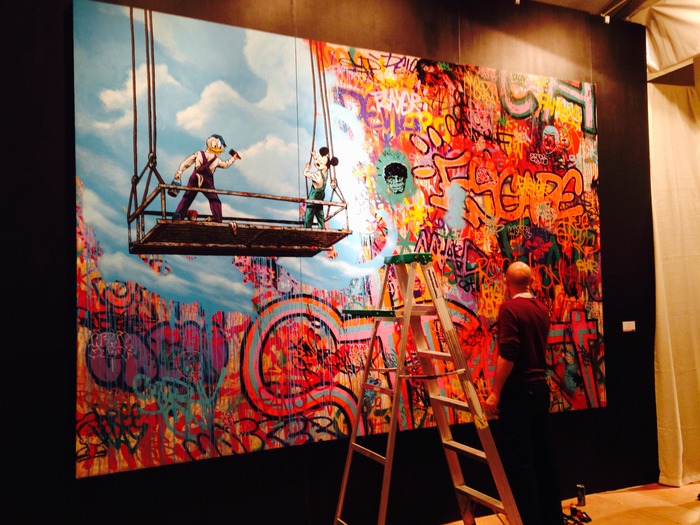 The Fabien Castanier Gallery from Los Angeles also showcased Speedy Graphito’s Mirror Mysteries, a mirror image of Snow White innocently holding a bitten Mac apple (a possible allusion to the suicide of computer scientist Alan Turing) surrounded by a kaleidoscope of menacing, cartoon beasts. The same gallery also exhibited installations from American artist Mark Jenkins, who uses the “street as a stage,” engaging passers-by and often drawing the attention of the police with his shady sculptures. His macabre, crime-alluding sculptures of men in sweats and hoodies did not create the same effect inside the fine-art gallery space. 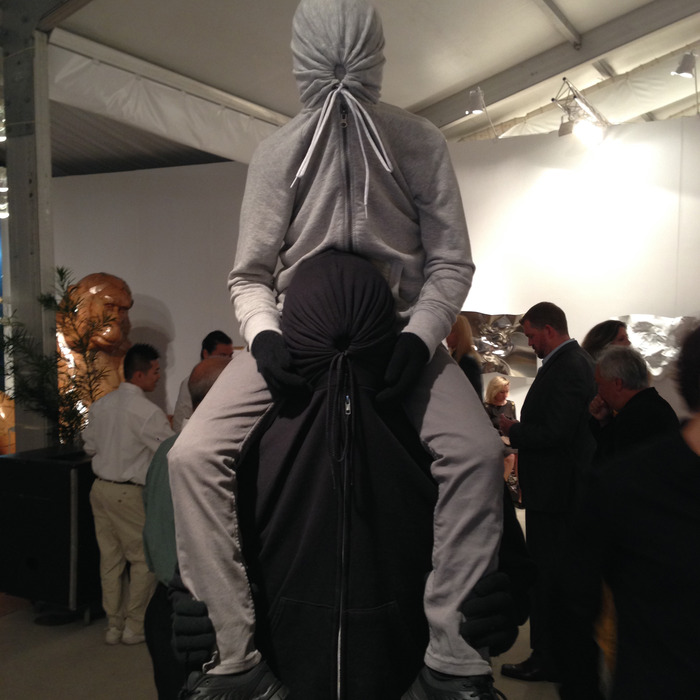 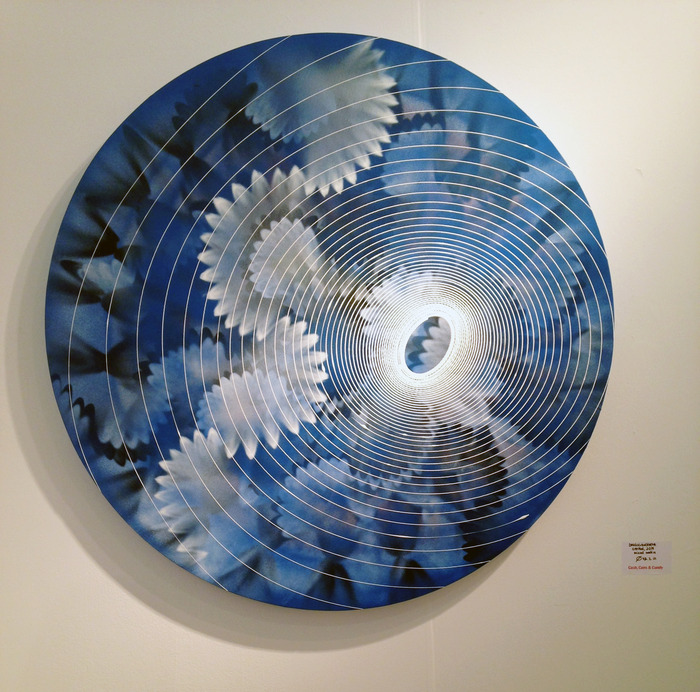 As evident in FAILE’s pieces, a trend in contemporary art includes short poetic, thought-provoking phrases written in eye-catching designs or bright neon lights. The latter blur the line between “low” culture of strip-clubs and junk-yards with the “high” culture of fine art. TYPOE’s white neon signs on the black walls of Spinello Projects from Miami, reading “How Long is Forever?” and “To All That Come To This Happy Place, Welcome,” greeted fair visitors with poetic messages.

Overall Art Wynwood 2014 embodied the movement of street art into the world of mainstream fine art, and all the lines blurred in between. Three murals on canvas from Maya Hayuk, Miss Van, and Fafi, commissioned by Jessica Goldman, CEO of Goldman Properties, were suspended over the fair’s VIP Lounge. Throughout the four-day affair, graffiti art hung high over the white gallery walls, reminding everyone that “low” culture has reached great heights. But, the movement makes one wonder if something is being lost in the transfer of street art from its habitat of origin, where the form was often fueled by protest, into galleries and art fairs, which are often driven by consumerism? 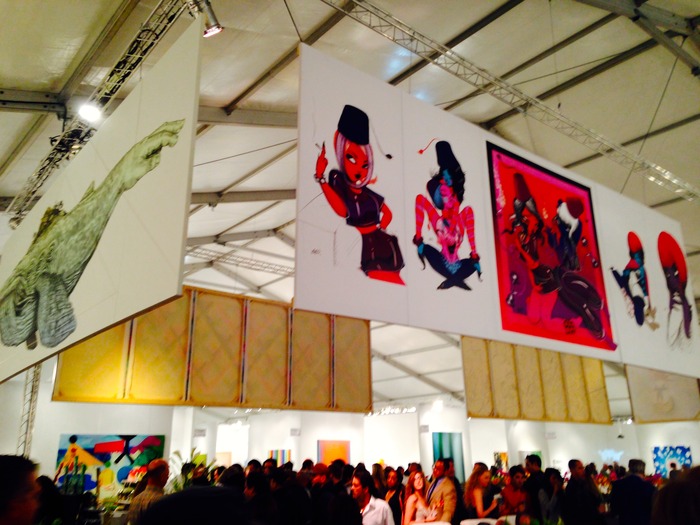 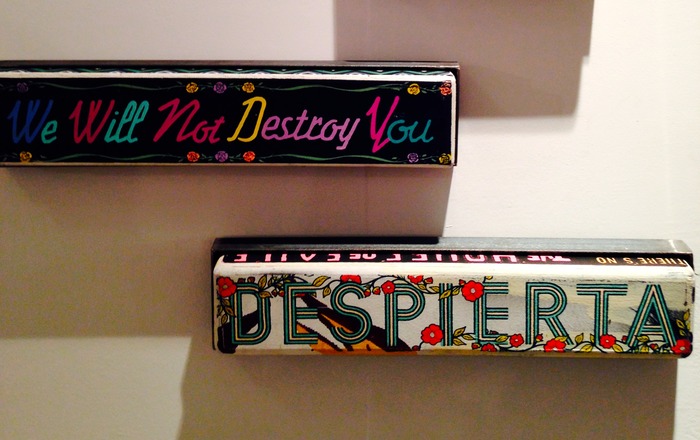 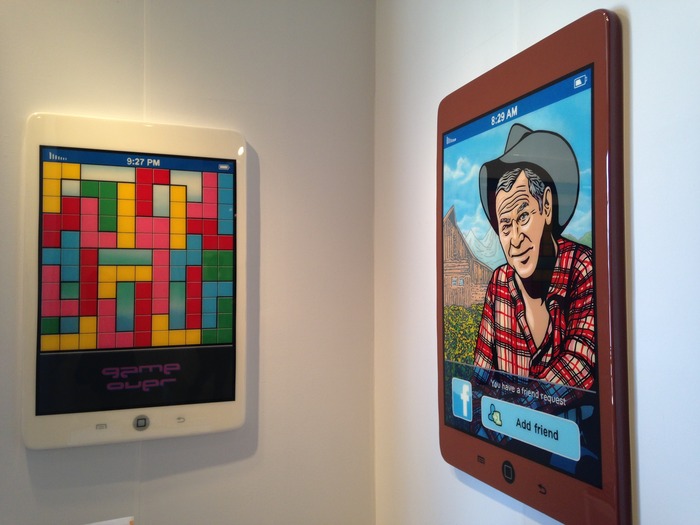 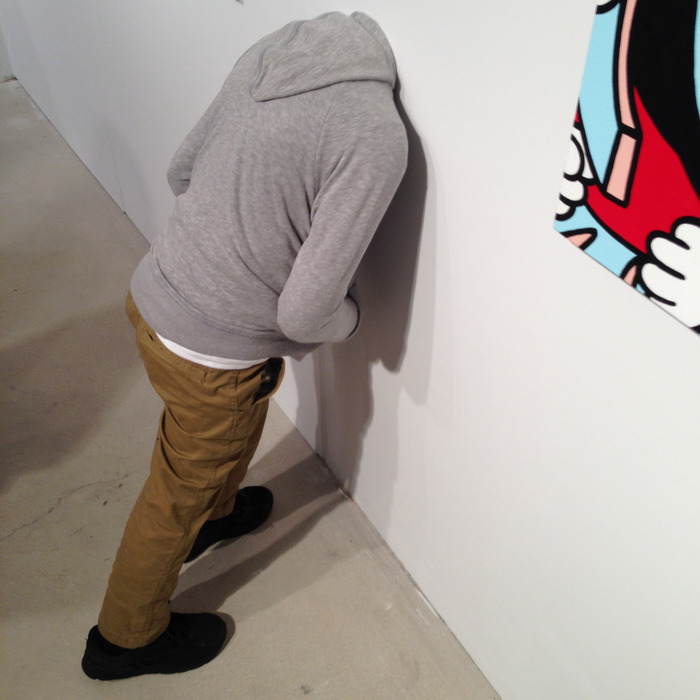 Mark Jenkins, Head in the Wall.

(All photos by Monica Torres.)