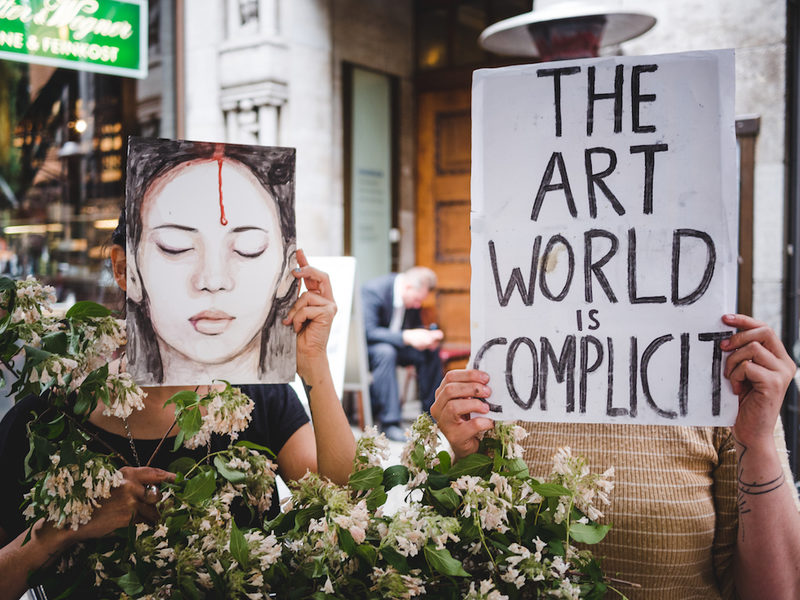 Where Is Ana Mendieta? Inspiring a New Generation of Artists Today

On the 8th of September, 1985, Cuban-American performance and multi-media artist Ana Mendieta fell naked from the window of her 34th floor apartment. The fatal fall occurred in the presence of her then husband, minimalist sculptor Carl Andre, who was subsequently charged with her murder. Despite evidence, including Mendieta’s acute fear of heights, which would have presumably kept her at a distance from the apartment’s large sliding glass windows, and witness statements claiming they heard an audible struggle, Andre was acquitted by a judge three years later on grounds of reasonable doubt.

For many of Mendieta’s close friends, family members, and contemporaries this acquittal far from solidified Andre’s innocence. Rather, they saw the case as mishandled and representative of larger problems plaguing both the art world and justice system. During the trial, as Andre’s account of the evening continued to morph and contradict itself, his lawyers were quick to use the contents of Mendieta’s highly intimate artwork to prove her instability and likeliness to self harm. Despite the controversy, Andre’s career suffered only slightly. Particularly in Europe, where he spent a significant amount of time following the acquittal, he continues to enjoy both critical and institutional success. The familiarity of this story and the inequalities it represents inspired support for Mendieta in great numbers, and actions in her defense at the time of Andre’s trial would soon lay the foundation for a longstanding tradition of activism that continues in her name today. 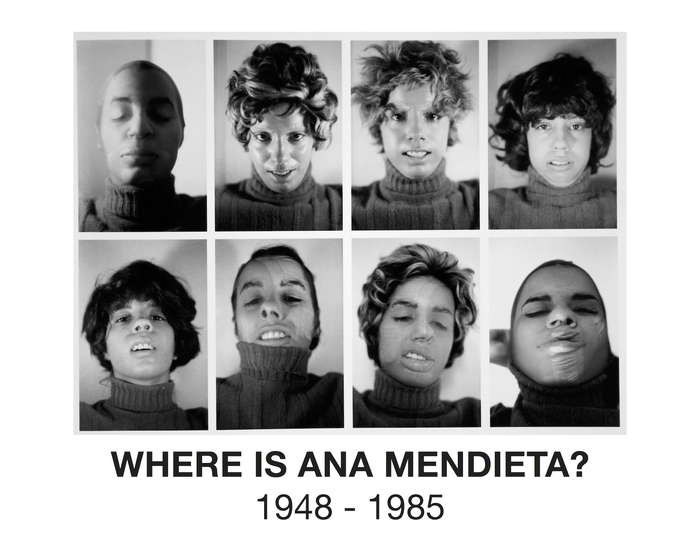 Though Mendieta’s career was not ended as abruptly as her life, its momentum was significantly slowed. She was once a pioneer in her field, fearlessly tackling subjects like mortality and violence against women— topics scarcely touched by her contemporaries at the time— through the lens of emerging genres like land and body art. While Mendieta has been featured in a number of major solo retrospectives, most recently the Art Institute of Chicago’s Ana Mendieta in 2011, by nearly every conventional metric her career has achieved less consistent and high-profile attention than Andre’s.

It was 1992 when the first protest of Mendieta’s erasure from the art world was organized. The Women’s Action Coalition gathered 500 protesters outside of New York’s Guggenheim Museum on an opening day, holding a banner which read “Carl Andre is in the Guggenheim. Where is Ana Mendieta?” They also pervaded the invite-only opening gala, dispersing pictures of Mendieta around some of Andre’s exhibited sculptures. Three years later, the Guerilla Girls released a poster calling Andre “the O.J. of the art world.” More recently, on the 25th anniversary of her death, NYU’s department of performance studies threw a symposium inspired by this action titled “Where is Ana Mendieta?” Addressing both the significant impact her work had in subsequent years on feminist art as well as the suspicious and controversial conditions of her death, this 2010 symposium featured panel discussions from curators, professors, and artists as well as original work and archives of Mendieta’s from A.I.R. Gallery. In 2014 Dia Art Foundation hosted a Carl Andre retrospective which was protested by feminist group No Wave Performance Task Force who poured animal blood outside the gallery as an homage to her art practice and reminder of her death. 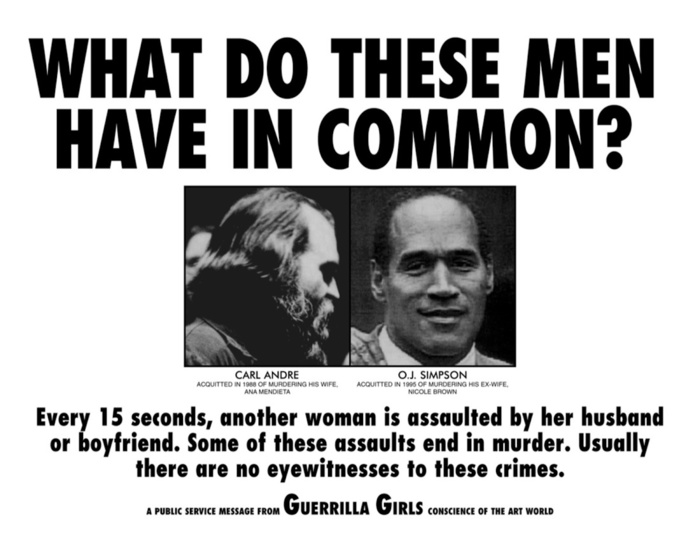 Founded in London in 2016 by a group of female and non-binary artists and activists WHEREISANAMENDIETA is carrying on this longstanding tradition of rallying around the artist to keep her work and story alive. Though they have organized a number of high profile protests over the past year at Carl Andre exhibitions in London and Berlin at institutions like the Tate Modern and Hamburger Bahnhof, their activism is not reserved exclusively for acts in defiance of Andre. Instead, they center Mendieta herself. Inspired by her art, with its strong thread of self documentation, this loose collective has been building an archive of work from artists who feel her story resonates with them. Self- and collective documentation of those who bear the weight of systemic oppression, they believe, is a radical act of resisting erasure. The group is currently raising funds to launch this digital archive online.

The word resonance seems to be essential to Mendieta’s life after death. Being a woman of color, refugee from the Cuban revolution, victim of domestic violence, and artist whose scathingly vulnerable artwork was used to prove her instability, she echoes the stories of so many who suffer under societal biases that infect both the art world and beyond. For Liv Wynter, an artist and founding organizer of WHEREISANAMENDIETA, similar experiences of domestic violence resonated with her and moved her to organize in support. “My motive was basically to make noise, to remember our sister who has passed, and to demand acknowledgement for how many murderers and abusers, most of whom are white men, occupy these galleries,” she explains. 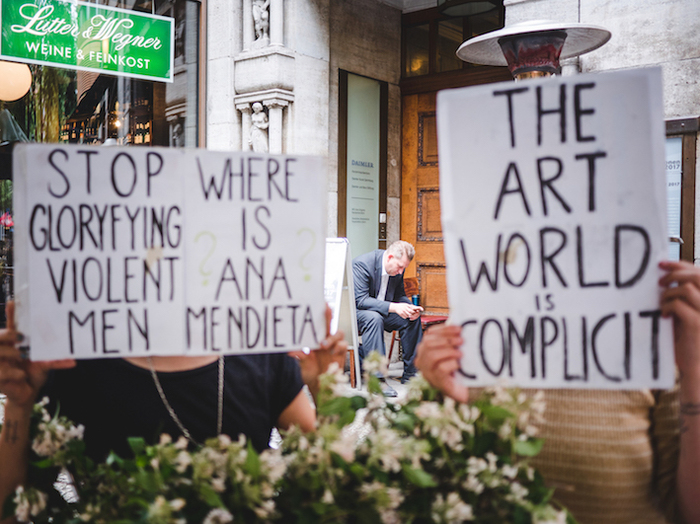 WHEREISANAMENDIETA organizers prepare for an action outside a Carl Andre exhibition at Daimler Contemporary in Berlin in June. The action was shut down before it could even begin.

Wynter connects with the artist as a survivor of domestic violence herself who makes work about intense feelings, emotions, and abuse. Nevertheless, she wanted to be clear that she is not occupying or claiming Mendieta's story, which includes the identifiers of race and the trauma of forced migration. “The aim,” Wynter says, “of both the zine that we initially published and the archive we are going on to create is to platform and project voices who feel other connections to Ana.”

For artist, cultural theorist, activist, and University of Amsterdam Cultural Analysis PhD candidate Nine Yamamoto-Masson it was also through resonance that Ana Mendieta became not only a source of creative influence and inspiration but also a symbol of the toxic effects of oppressive societal patterns rooted in patriarchy, white supremacy, and ableism. Yamamoto-Masson has contributed to WHEREISANAMENDIETA’s zine, and also offered a poem which was read during the group's original Tate London protest. She has been a physical presence in subsequent Berlin actions where she is based. She also recognizes the problematic nature of projecting on or appropriating other people’s traumatic stories. Nevertheless the personal parallels Yamamoto-Masson has experienced first hand as a woman of color, immigrant, survivor of intimate partner and sexual violence are consequences of the same systems of structural oppression that harmed Mendieta and continue to harm countless others. “I have lost too many good people I loved to these structural violences and seen too many good people suffer, while violent men (especially violent white men) face little to no legal and social consequences for their violent actions.” she explains. “For me this is unacceptable, and it is not an option for me personally to sit idly by.” 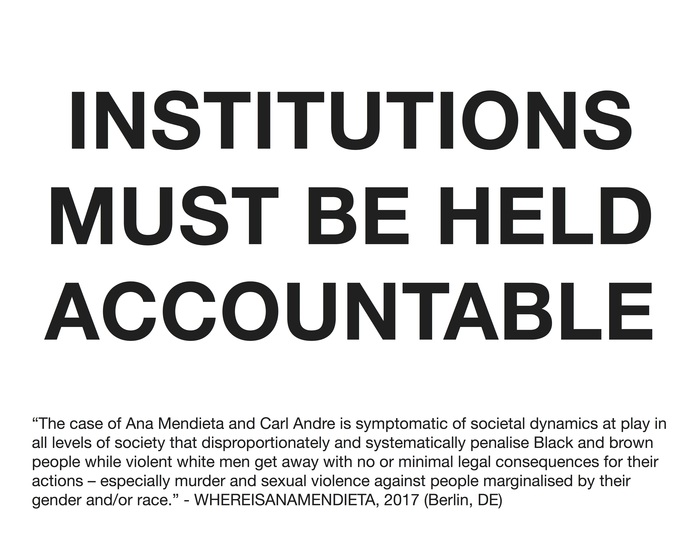 Berlin-based artist and a founder member of the city’s satellite group, Naomi Bisley raises the question of complicity in explaining her connection to WHEREISANAMENDIETA. She expounds that stories of violence against women are often those traded between peers in hushed tones; they are not the stories given attention to by mainstream media, they are not the stories which appear in our history books. “These are stories created by the dynamics at play in all levels of a society that disproportionately and systematically penalizes black and brown people, that dismisses survivors, that excludes women/non-binary/trans people, while violent white men get away with minimal or no legal consequences for their violent actions,” Bisley says. “Of course the art world is included in this structure, and every single gallery/institution/individual who participates in it without speaking out is complicit.”

Activists who see parallels to themselves, their peers, and their loved ones in Mendieta’s narrative refuse to be complicit; they will not let her death or work fade into the distance. It is this determination that keeps the movement alive. Separate groups acting decades apart have now informed a global movement, have provided it with a name, traditions, and a goal not only to bring Mendieta into all conversations circling Andre but also to build new things on the inspiration of her practice. Wherever there is Carl Andre, wherever there is erasure of artists who are women, non-binary, or of color, there is also WHEREISANAMENDIETA—anyone who wants to pose this question to a gallery or institution can act under that name. Where a history dictated by patriarchy, white supremacy, and ableism once existed there is now an archive, building and documenting a new, more just history. For those who seek the stories of Mendieta’s disciples there is now a zine. As the last line of WHEREISANAMENDIETA’s manifesto reads: “A violent white man over a dead woman of color, this is a rhetoric we encounter constantly, daily, and it must end.”

More details about WHEREISANAMENDIETA’s digital archive and submitting artwork can be found on their Facebook page here. Submissions can be directed to whereisanamendieta@gmail.com.

Maya-Roisin Slater is a Canadian-born, Berlin-based writer and editor with a focus on arts and culture. She writes for publications like Creators, Teen Vogue, Crack Magazine, and others. More of her writing can be found at maya-roisin.com/work.

(Image at top: WHEREISANAMENDIETA organizers prepare for an action outside a Carl Andre exhibition at Daimler Contemporary in Berlin in June. The action was shut down before it could even begin.)