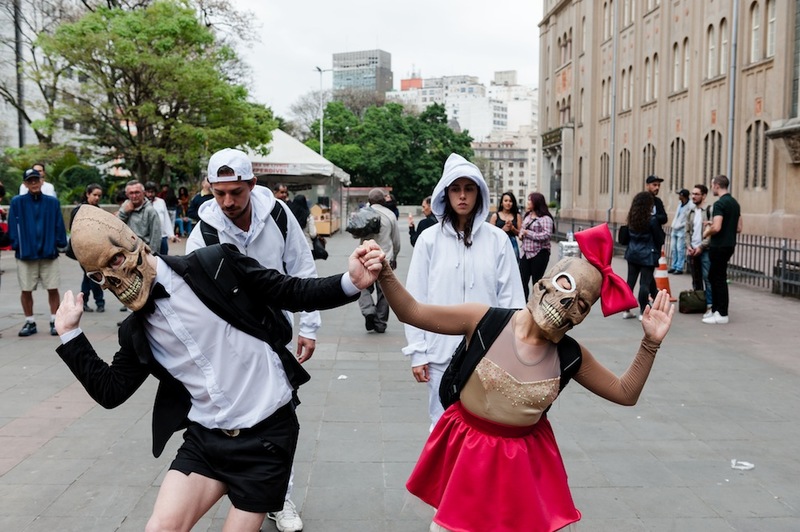 As I walked along the winding path of Parque Ibirapuera toward the São Paulo Bienal entrance, I thought about how the impeachment decision, which ousted Brazil’s first female president, Dilma Rousseff, was finalized a few days prior. When the decision came down, I was with a group of artists during a residency. We spent ten days together in Zone Leste, the east zone in the periphery, away from the bustling city center. One of us had gone out the night before and reported that there were protests in the streets, blocking traffic. The day the bienal opened to the public, September 7, Independence Day in Brazil, I had the dull thumping of helicopter wings circling the city’s central historic district as a late evening digestif.

In their opening essay for the 32nd São Paulo Bienal, Incerteza Viva (Live Uncertainty), the curators write, “While stability is understood as a remedy against anxiety, uncertainty is generally avoided or denied... Historically, art has insisted on vocabularies that allow for fiction and otherness, and it dwells on the incapacity of existing means to describe the systems we are part of...” The Minister of Culture echoed this point, commenting that art allows us to break indifference and can stimulate critical reflection on our lives and the world, that artists and arts practice allow us to imagine different realities and scenarios beyond what we may have believed to be possible. It is true, as the curators write, that perhaps we need this bienal now more than ever.

Shortly after his interim term began in May, President Michel Temer tried to implement a number of austerity measures that included eliminating or consolidating positions and support services for arts and culture in Brazil. The people protested loudly, and he relented, but now that he’s officially president this lingering threat of conservatism is more palpable: Temer has free reign to do what he will. What does it mean that more than half of the artists featured in the 32nd edition are women, many from the global south rather than north, yet there are currently no women leaders in the cabinet, let alone people of color? I don’t know, but the political climate gave the artists and works I was drawn to increased gravitas and meaning. 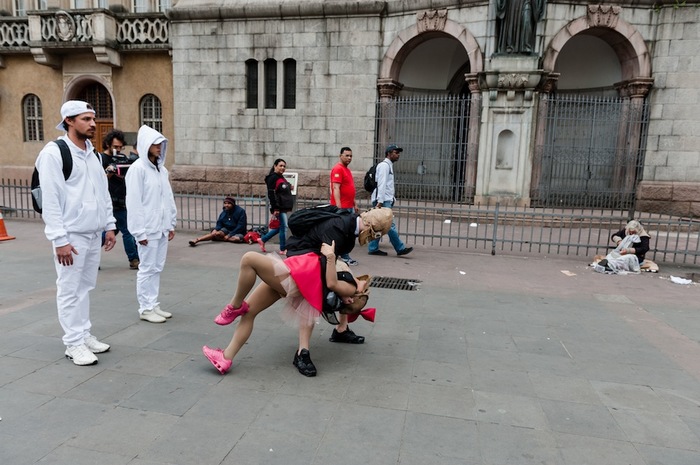 Pope.L creates performances, installations, drawings, paintings, and sculptures highlighting social inequality, tempered with humor and irony. For the bienal, he created a performance circuit where participants navigate areas of the city center with deep socioeconomic divides. Although São Paulo considers itself a cosmopolitan city, its class divides remain rigid, and the demarcation between rich and poor is not just theoretical, but often visible. Homeless people build camps on the sidewalks and put up shelters in public squares. One of the streets on this route was the Anhangabaú, a place with a deep history of cultural activity and activism. Its public square—a victim of repeated real estate speculation—is now primarily used as a gathering space, but the people who reside in the surrounding community continue to fight against gentrification. Pope.L’s action through some of the most contested parts of the city center highlighted divisions that may only increase in the current political environment. 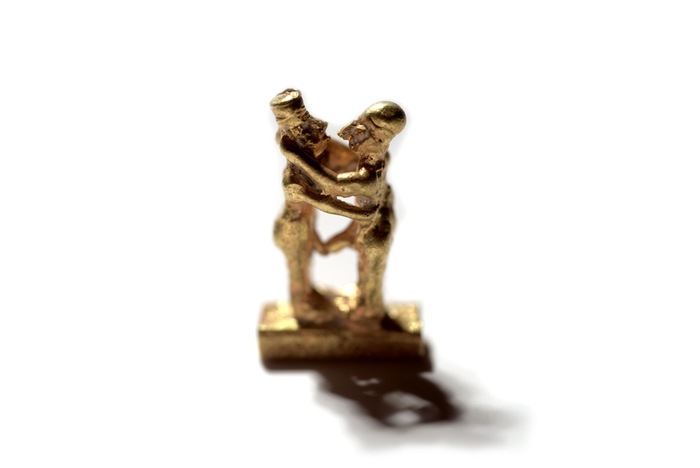 Walking along the streets of Zona Leste one day, a friend pointed out a door to a religious space, likely for Umbanda, a syncretic religion similar to Candomblé practiced by some brasileiros. Another friend told stories of how he had recently began incorporating the Yoruba Orisha, Eshu, into his performance work. My friends spoke casually about their faith, but their embrace of African and indigenous religious practices is significant: Brazil is a country heavily influenced by Catholicism, a legacy of colonization. Carlos Motta’s Towards a Homoerotic Historiography (2013–14) addresses this issue by allowing us to imagine new ways of being not colored by colonialism. The installation, consisting of tiny figures in various states of intimacy behind wall cubbies in a darkened room suggests that different forms of relationship, intimacy, gender identity, and sexuality were repressed through colonialism’s use of Christianity as a moralizing weapon of submission. Motta’s installation seeks to reveal and question the things we may have been told to loathe about ourselves. 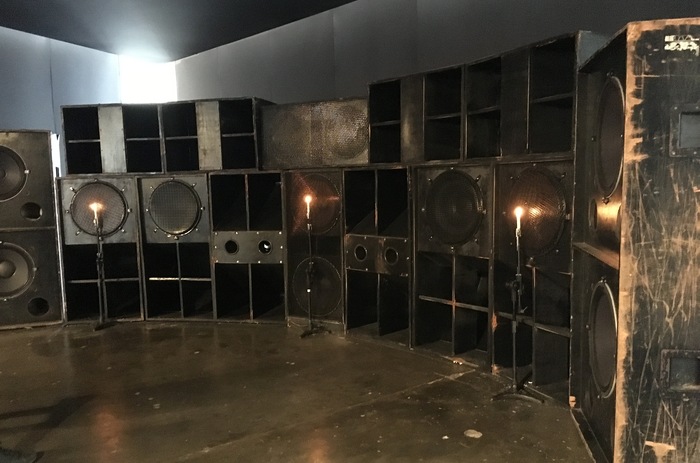 On my first day in the city, I asked a friend the proper way to respond to the common greeting, “Tudo Bom?” in Portuguese. He told me to say, “Ta Bom,” which approximately translates to “I’m okay.” In the following days, my friends and I were asked to think about the sound of freedom and the sound of revolution. Vivian Caccuri’s installation, TabomBass (2016) reminds me of the stacked speakers of sound systems at parties; in front of them, she places three, evenly spaced, lit tapers, alluding to the power and affect inherent in sound. Caccuri’s speakers are functional, blasting a vibrating, bone rattling sound piece, made in collaboration with Brazilian and Ghanaian musicians, at various intervals. The work is based in her research on Brazil’s largest and most significant slave revolt in Salvador, Bahia. Leaders of the 19th century uprising who weren’t executed or flogged were deported to Africa. Accra received a large portion of them. Since the people did not know the local language, they responded “Ta bom,” to everything anyone said to them, and to this day, their descents are known as “Tabom.” Caccuri’s work often engages music, architecture, and the body to tease out new relationships between the past and present. TabomBass shows how people who long for freedom can be innovative in the ways they make their liberatory space manifest.

One day, in the middle of a moment of deep sharing at the residency, someone made a joke to break the tension. The Portuguese speakers laughed, and an English speaker, intuiting what happened, challenged the group to stay in the place of discomfort a little longer because that is usually where personal growth and transformation begins. One of the multi-lingual brasileiros explained that Brazilians laugh and joke a lot, that humor is perhaps a curative, as in, we laugh so we do not cry. This country is resilient; the ability of brasileiros to survive, thrive, create, live, laugh, and love in precarity—economic recession, repressive governing regimes, constricting moral and social codes and shifting identity politics—creates the perfect backdrop for a bienal exploring uncertainty, ambiguity, and change. Brazil once again finds itself at a critical moment: things can go really badly or something liberatory and open can happen.

Incerteza Viva is filled with artworks visualizing humanity’s potential and posing questions about how we might get there. Despite all of the uncertainty, I think this suggests we’ll all be okay.