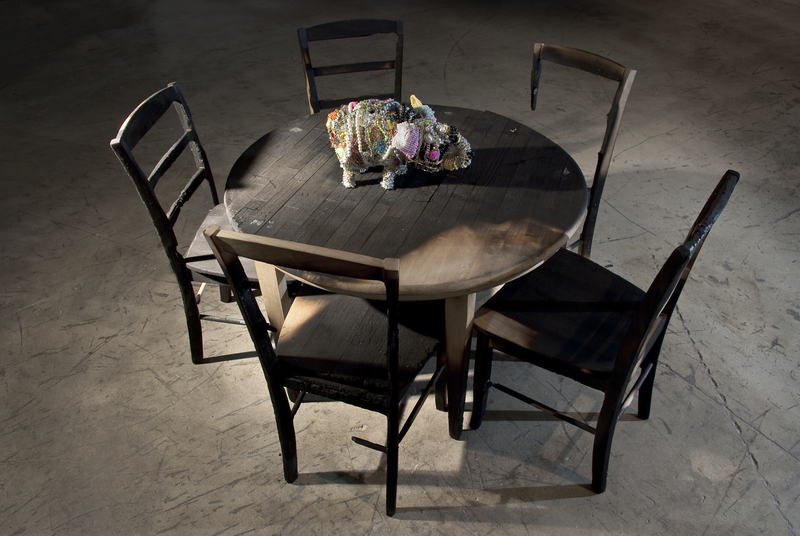 The Pearl of Memory

It is curious how memories from childhood have their own specific barriers to being completely restored. They are not only hollowed out by the distance of time, but also altered fundamentally as psychosocial development takes its course. The result is a slippage between history and its many emotional associations; what’s left are mixed feelings of remorseful nostalgia and relief that bygones are indeed bygone.

In The Pearl, Cuban American artist Enrique Martínez Celaya takes up the drama of youth, wrought as it is with fear, wonder, trepidation and exuberance, in various proportions, and explores both the deterioration of memory and memory’s role in informing the present.

The Pearl is an immersive environment that sprawls across the entirety of SITE Santa Fe’s 12,000 square feet of gallery spaces. Utilizing painting, sculpture, sound, video, and light, the artist creates various installations threaded together by a continuous clear plastic tube of circulating water. The viewer follows the flow of the water from gallery to gallery in a manner suggestive of following a narrative. However, the individual installations are more akin to rhythmic pulses within a meandering melody, or emotional beats within a theatrical performance. They are better described as moments of encounter, sparsely arranged in the vast gallery space, replete with both climaxes and spaces of silence.

The first of these encounters takes place beyond a dark curtain in a small vestibule. On a white curtain ahead, a projected video of a German shepherd eating wet food in the shape of a house loops to a recording of a child shriek-laughing. In this liminal space, the jarring experience dislodges the viewer from conventional temporal and spatial markers and prepares the viewer for the rest of the exhibition. Following this introduction, time and space are left ambiguous as they are contemplated as obstacles to remember things lost: loss of home, the anxiety of boyhood, the persistent longing for guardianship, and ultimately the hard-won pains of growth.

Several of the major motifs repeated throughout the installations are confronted in the first, large gallery space. In one scene, an old radio surrounded by kitschy porcelain bird figurines invokes warm attachment to relics found in a grandparent’s house. A sculpted German shepherd on an ordinary end table appears as an earnest, if not sentimental, monument to a lonely boy’s beloved protector. A rowboat, sunken into the floor and filled with a pool of water bears a small lighthouse. Referencing an historical method of public humiliation, the vessel is tarred and feathered, carrying a protective device rendered useless due to dislocation. 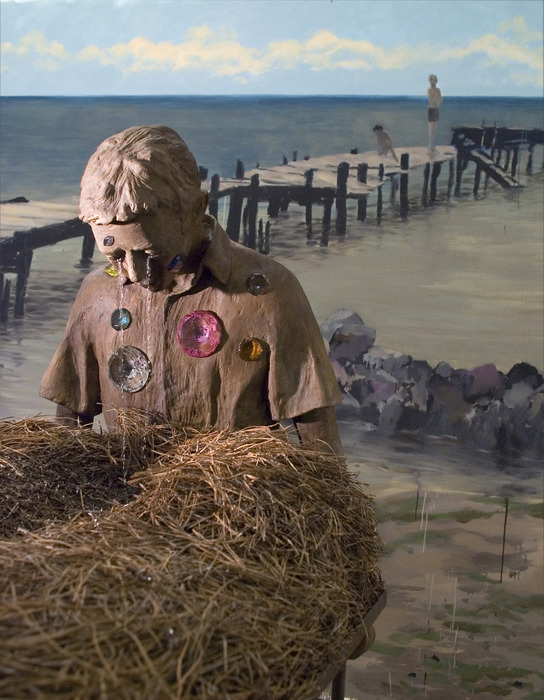 Following the flowing, water-filled tubing into the next room, a charred dining table and chairs support an elaborately bedazzled elephant figurine. The jeweled object recalls the wonder and simple fascination felt by youthful eyes. Atop a funereal table, marking loss of domesticity, the elephant now looks simply ridiculous.

The visual verses of The Pearl continue along its watery path, with recurring motifs and re-iterated themes. A small side room consists entirely of ornithological portraits of birds, read as so many takes on a single impulse as the shadow cast from the tubing ropes them together. In a large, stark room a bronze, larger-than-life bedazzled boy cries out tears at a pace unrealistic enough to resist sentimentality. Now freed from its tubing, the water trickles down straw-covered platforms, leading the viewer past two large-scale paintings. Occupying opposite walls, the two paintings reflect conflicting emotional concerns. In the first, two boys stand on the edge of the sea on a decaying dock, isolated against the clouded water. They are distanced from the shore as they encounter the vastness of the unknown world before them. In the other, a boy plays in a lush field, encountering brilliantly colored flowers and a super-sized songbird: an ordinary scene made fantastic by naive eyes. Despite their conflicting moods, both paintings are loose and wrought with brush-marks. Rough and raw edges fade like the memories the images reach out for as the dénouement begins. 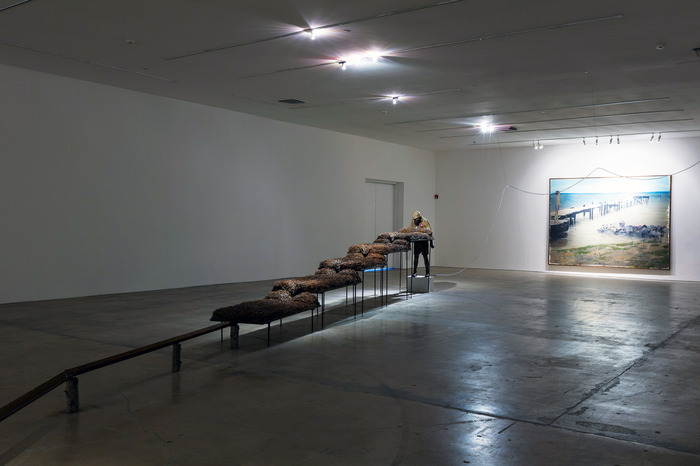 The trickling water resumes its course in the following room, darkened except for stars of light cast on the ceiling from cutouts on the ceiling of a plywood house, illuminated from within. Martínez Celaya’s visual poem comes to an end in the final room in which a pool of water has been built into the concrete floor of SITE’s gallery. As the water collects, it is pumped back into the tube at the beginning with an anatomically lung-shaped pump. A faux woodland scene surrounds the water feature, a taxidermied fox present as a testament to the German shepherd’s affections.

What then, is the meaning of the pearl in The Pearl? The pearl grows over the painful aches of youth, surrounding the foreign grains in the luster of memory. It is self-curing, both obscuring grief, and existing precisely because of it. Simultaneity is threaded throughout the exhibition. As the distance from childhood and longing for the idea of home are re-envisioned again and again in visual and material vignettes, conflicting emotional connotations are conjoined and entwined, as mutable as the water linking each iteration. The component installations are mildly redundant, in that each is a contemplation ostensibly inadequate in its attempt to recapture the previous life that is youth. It is the uncomfortable emptiness of the exhibition space, the silences in between that reaffirm the aching realization that time and space lost is irretrievable to objects and meditations alike.