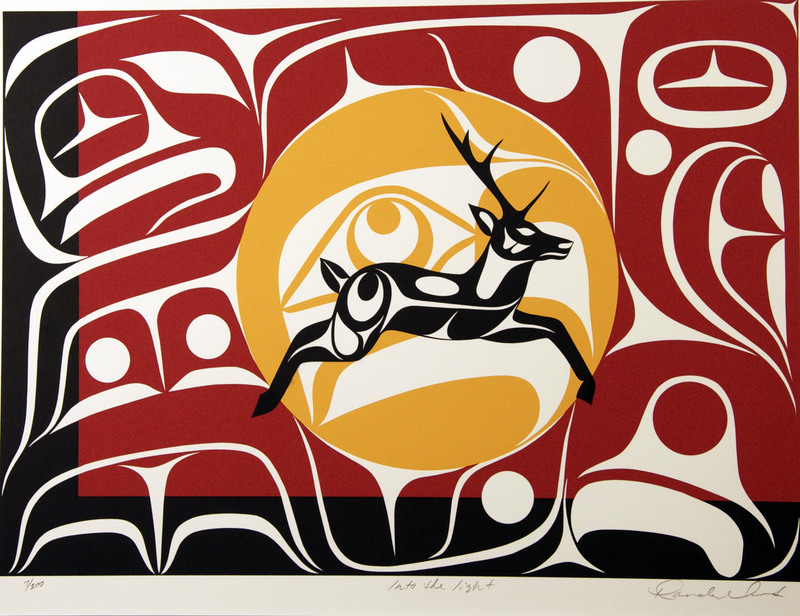 Galleries address the collision of values in cultural matrix

Now before anyone jumps on their cavalry pony and decides to raid yet another unprotected village, things are never as clear and simple as they seem.

Thanks to the efforts of scholar and curator Nancy Marie Mithlo and her curatorial team, elements from both of these exhibitions are part of the 2013 Venice Biennale in Venice, Italy, which is possibly the most prestigious exhibition in our sometimes hapless world. Many works by participating artists will remain on tour in Russia and other European countries.

These gorgeous multimedia installations, though tainted by a touch of sadness for what once was a relatively pristine planet, are nonetheless wonderful visual experiences.

The two-story-tall entrance gallery is filled with appliquéd images that create a discursive mural of juxtaposed fragments of trees, birds, butterflies, deer, horses, buffalo, army tanks and abstract symbols. The installation, titled “Impact Vs. Influence” by John Hitchcock and Emily Arthur with Marwin Begaye and Ryan O’Malley, despite its apparent randomness clearly narrates the story of magic and myth versus the power of greed.

Their visual cacophony echoes how we are all bombarded by sound bites, highly edited news pictures, print advertisements and 30-second TV commercials all designed to confuse and manipulate our perception.

Around the corner we find “Air, Land, Seed,” a carefully executed four-panel collage on paper by Henry Payer that becomes a montage of culturally intermingled imagery. The piece illustrates the show’s theme which is a transmutation of part of the United Sates Marine anthem that begins with “From the halls of Montezuma …” and ends with “We fight our country’s battles, in the air, on land and sea.”

The rest of the first-floor gallery is brimming with works in conventional formats, videos and complex installations. Two favorite artists are Ryan O’Malley, who offers “The Overseer Mandala,” and Begaye with his stunning “Rider of the Storm” woodblock print.

“The Overseer Mandala” is a beautifully rendered image of multiple ravens arranged in a circular motif that places their heads and eyes in the center. It is a powerful reminder of the wisdom found in all animals by indigenous people.

In many native cultures the raven and coyote are tricksters who reveal the limitations of human beings. Recent scientific studies have shown the complex intelligence of crows and ravens including their ability to pass information from one generation to the next.

Begaye is showing a series of woodblock and lithographic prints that are beautifully drawn as well as apocalyptic. No matter how much denial we can muster, a hard rain is a going to fall, to paraphrase Bob Dylan.

Most of the truly stunning color lives in the upstairs gallery in the “Octopus Dreams” exhibition. All 36 artists are people of note including Tony Abeyta, Bob Haozous, Emily Teeter, Jaune Quick-To-See Smith, Emmi Whitehorse, N. Scott Momaday and many others.

The show’s title was taken from Momaday’s 1990 novel “The Ancient Child” wherein his character Locke Setman dreams of saving a beached octopus while wondering if the octopus might dream of him during nocturnal hours in the sea.

Whitehorse makes dreamy art that chronicles her experience of a particular time and place. Her “Untitled Monoprint” is filled with images that seem to float in a liquid color field that is somehow moving and adrift like a fading memory.

There are far too many beautiful works in both shows to cover here but we owe our gratitude to 516 ARTS director Suzanne Sbarge, professor Nancy Marie Mithlo and their co-workers who brought these fantastic shows to Albuquerque.

Mithlo wrote in her catalogue essay: “The artists in ‘Air, Land, Seed’ gently remind us that yes, we live in dangerous times, but remember, we are only human.”

Posted by 516 Arts on 8/13/13
RELATED ARTICLES
COMMENTS (0)
ArtSlant has shutdown. The website is currently running in a view-only mode to allow archiving of the content.