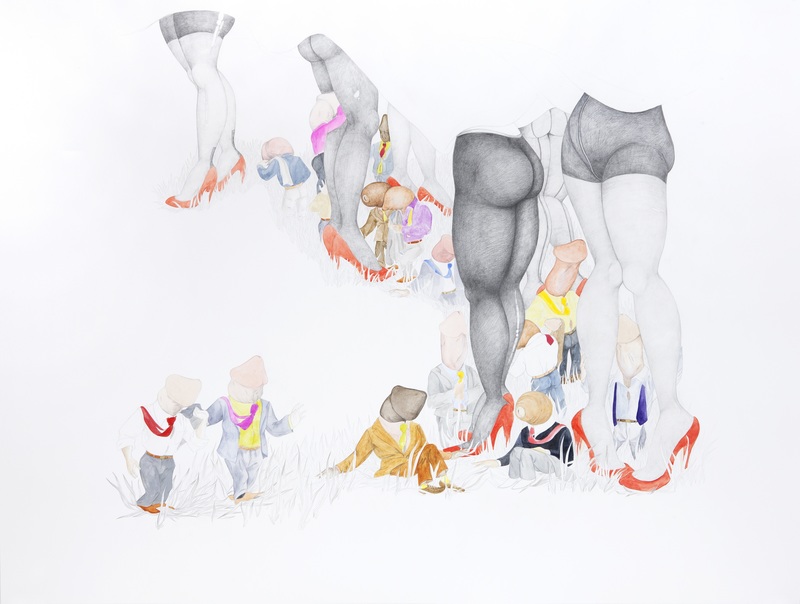 Asa nisa masa, a phrase from Fellini’s 8½, is an incantation recalled from the childhood of the film’s protagonist, Guido. In the film we see a young Guido utter the phrase repeatedly while wildly jumping and flapping his arms in the hopes of summoning a painting on his bedroom wall to come to life. The current exhibition on view at Eight Modern gallery by Fay Ku owes its title to Guido’s memorable hymn. When you remove the second syllable of each word in the phrase asa nisa masa, what is left is the word “anima”, a word used by Carl Jung to describe the personification of repressed female characteristics in the male. The dual meaning of Fellini’s asa nisa masa, as both a reverie from youth and as an exploration of the repressed aspects of personality, is an apt title for Ku’s work which depicts a fairy-tale world full of imagined beasts and characters wrestling with issues of identity.

Fay Ku was born in Taiwan to Chinese immigrants, and moved to the States when she was three years old. She split her youth between Oklahoma, Texas, Colorado, and Maryland. A graduate of Pratt Institute, she is now based in Brooklyn. Ku’s storybook-like illustrations are gently executed, but carry sinister overtones. Her technique is delicate with soft graphite lines and washes of watercolor in yellow and pink. Ku’s muted tones are punctuated with the occasional pop of striking color in crimson and indigo. Her compositions are dreamlike. Half-human, half-bird creatures with elegant plumes screeching and contorting against blank backgrounds. In one image, a forest of trees with white paper-thin bark conceals a gathering of human-like figures with houses in the place of heads. 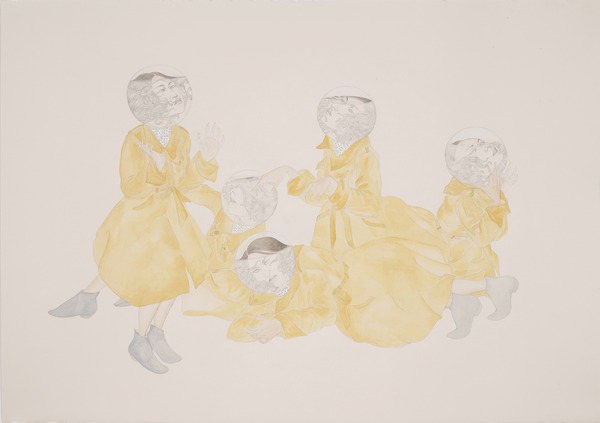 In Local Weather, five identical figures appear wearing yellow trench coats; their heads are each orbed with bubbles filled nearly to the top with water. They are posed in exaggerated stances, their hands outstretched in various gestures, and their faces careening upward to reach the air at the top of their fishbowls. There is a palpable sense of urgency and despair in their expressions, which is belied by the elegant way they comport themselves. Their movements are controlled and balletic, as if they were moving through the steps of a dance sequence. The theatricality of their movements contrasts with the horror of their situation, creating a kind of cruelly ironic tableau. Despite their apparent sameness, the figures are each trapped within their own sphere, unable to relate or empathize with the others.

In Woman and Seven-Headed Beast we see a figure of a woman with two torsos hunched forward with both sets of arms extended as if to move into a crawl. Her two necks are populated with a mass of visages piled grotesquely, one on top of the other. The faces are mask-like, and look as though they could be peeled off layer by layer. The piece communicates a sense of pain and trauma originating from the competition of these various identities. Each face contends with the next, bulging and warping shape in an effort to emerge to the surface. In Luncheon, Ku conjures a more jovial tone. We see sets of chubby female legs populating a rolling landscape of besuited phalluses. The work is rendered in a cartoonish style. The overt sexuality of the piece is muted by the harmless, comic quality of the half-penis, half-man figures. Their heads droop and bob with artless impotency. The apparent innocuousness of the little men paired with the considerable scale of the legs presents an interesting power dynamic in which it is unclear who is in fact in charge. 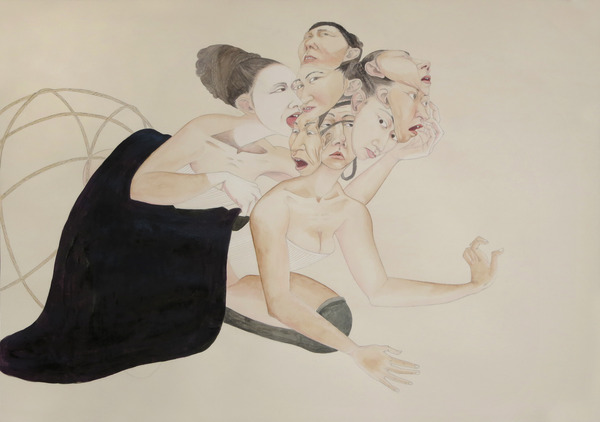 The staged, gestural quality of Ku’s work in Asa Nisa Masa combined with the disquieting subject matter and her delicate pencil work creates a mesmerizing overall effect. The viewer is drawn into an enchanting world of strange, haunting, and – at times – comic characters. They are a memorable cast of beasts, together forming a mythology that is purely Ku’s own.