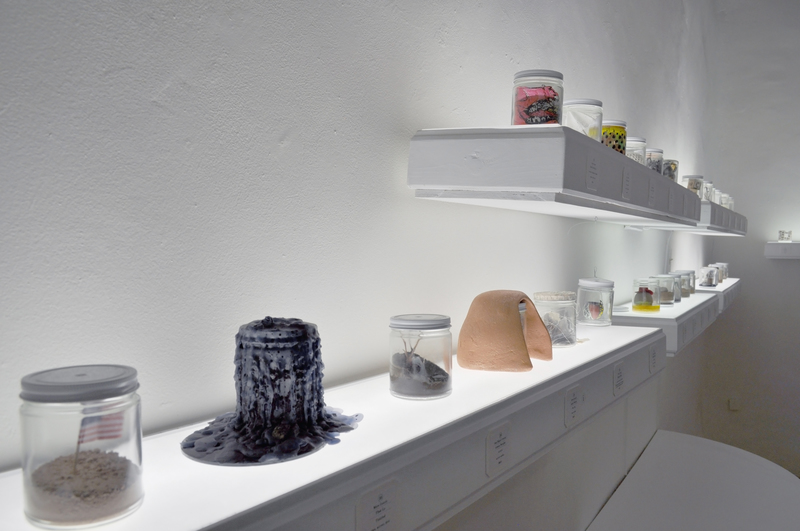 Materials are often an afterthought in the artistic process; something to be snatched up in an art supply superstore from fluorescent-lit shelves of chromatically organized jars and tubes. Among artists who hunt for and process their own materials, however, medium becomes an inevitable focal point of the work. The romance of mixing minerals with egg yolk or spreading a tea stain across a blank page can become its own intriguing story, independent from the subject of the final piece. In Rare Earth, a group exhibition currently on view at Red Dot Gallery on Santa Fe’s Canyon Road, material is the heart of the message.

Crockett Bodelson and Sandra Wang, who produce art under the moniker SCUBA, are the creative masterminds behind Rare Earth. For the project, the pair took an epic road trip across the state of New Mexico, collecting samples of earth as they traveled. A video of their journey plays silently on a television in a corner of Red Dot Gallery. Though it contains relatively little action, the video is strangely transfixing. In one section, a dust storm kicks up and twirls menacingly in the frame. At another moment, a pack of gazelle-like animals run alongside the couple’s moving car. The fruits of SCUBA’s geological expedition are displayed in glass jars at the beginning of the Rare Earth exhibition. There are thirty-three samples in total, one for every county in New Mexico. Together they are arranged in an eye-pleasing earthen rainbow that is a symphony of umber with notes of black, red, and ivory scattered throughout. 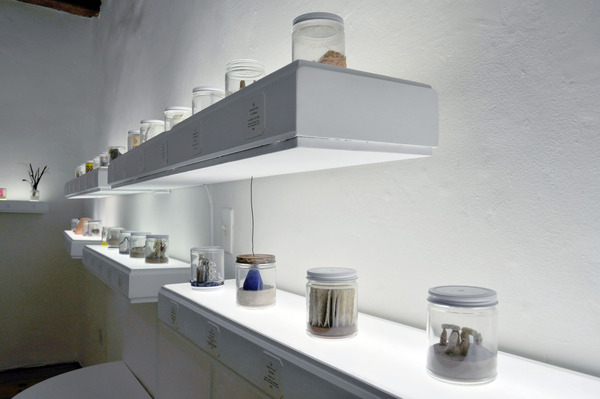 After SCUBA acquired their samples of earth, they put out a call for artists living in New Mexico to come claim a dirt specimen and create an art piece with it; the only stipulation being that the piece must fit within the confines of a simple glass jar. The work of sixty-six artists comprises the final exhibition on view at Red Dot Gallery. Their jars are displayed on glowing shelves in the low-lit first and second galleries. The artists of Rare Earth make use of an extensive range of materials from horse blood to solar cells. Most materials possess a strong connection to notions of land, nature, and the environment.

The individual pieces of Rare Earth vary widely in subject matter and style. One jar entitled Mystery of Satellite 7 houses a glowing glob of alien matter, another jar, with its placid landscape and delicate wisps of trees, resembles a picturesque snow-globe. A particularly diverting shelf in the front of the gallery features a selection of “interactive” jars. Directions such as “Turn upside down to investigate further” are posted on tiny labels to guide the viewer in their interactions with the pieces. This section reveals a series of clever surprises. A jar that appears at first glance to be a clump of grass in sand is later revealed to be the headdress of a Katsina doll when turned fully upside down. A few jars come with corresponding artist’s statements. These texts offer new and at times surprising layers of meaning to the experience of each work. In a particularly memorable statement, artist Eli Gonzales describes his piece Escaping My Roots as an attempt to exorcise a shockingly bloody family history that traces its roots to the Cimarron Valley of New Mexico. This backstory gives Gonzales’ piece, which consists of a translucent hand reaching eerily out of a pool of blood red ink, an even more ominous aura. 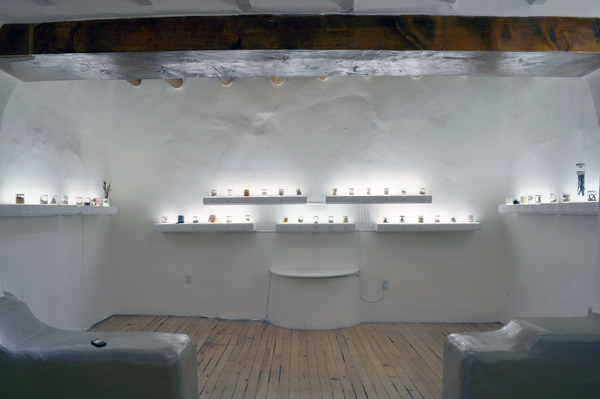 The exhibition Rare Earth is a kind of love letter to the state of New Mexico. The deep ties that exist between the artists of Rare Earth and the landscape are evident in nearly every piece. Whether the artist’s connection originates from a familial history in New Mexico, a sensuous appreciation for the land, or is born out of eco-conscious concerns, all the pieces in Rare Earth share a spirit of reverence for the Land of Enchantment.