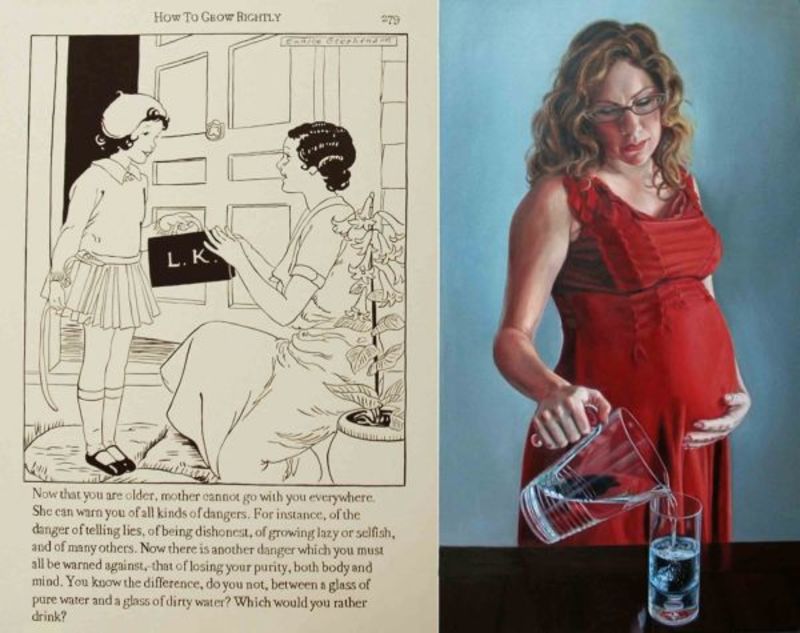 It takes an object, a quirky bizarre little thing, to inspire me to paint. For me these objects, often childhood memorabilia, are emblematic of the complex nature of being a woman. Through self-portraiture I strive to understand and make sense of numerous personal and political contradictions. With this I play many roles: the child, the adolescent, the young adult, the woman and the mother. The time and space is psychological; it is formed of broken childhood memories and adult desires where the past, present and future collide. I am interested in this collision, not only in content, but also in form. I fragment the picture plane and create simultaneous realities: one of graphic early 20th century children’s storybook lessons and one that is classically rendered. The graphic images are bright and sweet, but combined with the text and the figure they underlie a darker more complex message. The uncanny, according to Freud, arouses initial feelings of fright or terror before revealing a sense of comfort in familiarity. I suggest the reverse, that our nostalgia for simpler times belies our horror, simultaneously attracting and repelling. 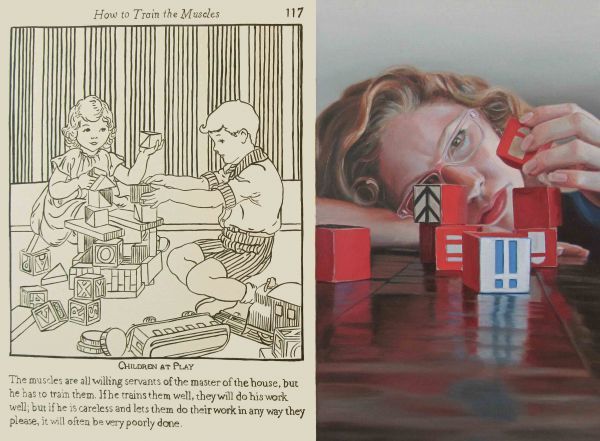 Forrest Solis, How to Train Your Muscles, Mixed media, 18" x 24"; Courtesy of the artist and The Peterson - Cody Gallery

Forrest Solis received her B.F.A. in 2001 from the Kansas City Art Institute and an M.F.A. in 2003 from Indiana University. While studying at Indiana University, she received the prestigious Dedalus Foundation Master of Fine Arts Fellowship. Solis taught as Assistant Professor of Art at DePauw University, Indiana, until 2006 and is currently an Assistant Professor of Art at Arizona State University in Phoenix. Her paintings have been exhibited regionally and nationally, including Sylvia White Gallery, Ventura, CA; Woman Made Gallery, Chicago, IL; Torpedo Factory, Alexandria, VA; Hive Gallery, Los Angeles, CA; and Mesa Art Center, Mesa, AZ. In October 2009, ARC Gallery in Chicago opened Playthings, a solo exhibition of Solis' paintings. Her work has been published in Direct Art, Studio Visit and Visual Overture Magazine.

Terry Strickalnd knows she is doing what she was meant to do. After graduating from the University of Central FL with a BFA in Graphic Design,Strickland had an interesting and varied art career, working in the imprinted sportswear, gaming and publishing industries as well as courtroom sketch artist. Since devoting herself to painting full time in 2005, Strickland's work has won numerous awards and been widely published and collected. 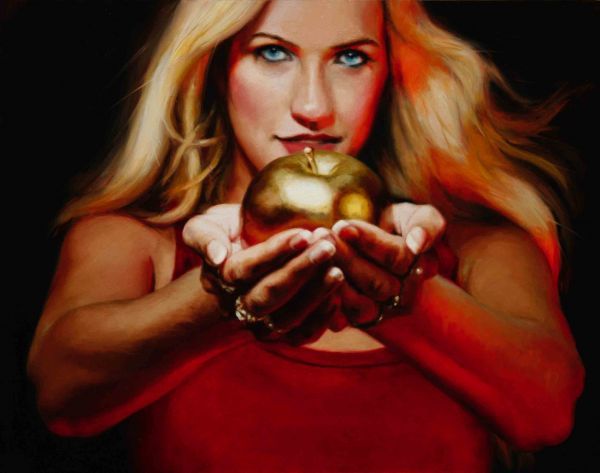 Terry Strickland, The Bribe, Oil, 11" x 14"; Courtesy of the artist and The Peterson - Cody Gallery

Strickalnd is intrigued by the idea of a work of art looking like an old master’s painting but with a contemporary edge. As an artist, Strickland wants to be a filter for the time in which she lives. Strickalnd is frequently inspired by fairy tales, superheroes or works of literature and she reexamines them in a contemporary way.

(Image at top: Forrest Solis, How to Grow Rightly , Mixed media, 42" x 54"; Courtesy of the artist and The Peterson - Cody Gallery)