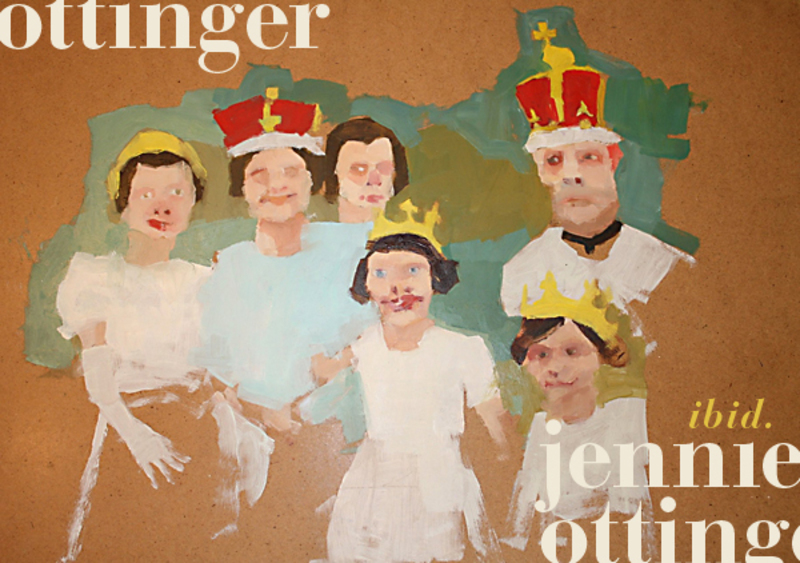 I bid you welcome to Ibid, a solo show by Jennie Ottinger that packs more red dots than the secret service. To stave off any phantom limb syndrome caused by *gasp* selling work, Jennie redraws, on a 1/16 scale, each painting in pencil. (You can find them in her personal rolodex on the gallery's main desk.)

Documentation is integral to her work, straight up and down. Each painting or drawing begins with a photographic source image (pulled from newspapers, magazines, and photo archives largely from the pre-internet era). And you can equally argue that each piece ends by returning to photography, the kind that ends up on the Johansson Projects website.

It's unfortunate, then, that her photos are so greatly misleading; they harm her work by isolating each framed sheet as a single document pulled from context. In this form they make no sense, though it's a handy way to start describing them.

Mostly there are paintings on the walls. Lots of them. Watercolor, gouache, and oil on colored and textured papers. There must be 50 white frames, maybe more. Populated with ruddy, blocky faces and dark, pitted eye sockets that recall the rawness of  Bill Plympton cartoons, the tableaux of flesh "masks" clutch figures often sutured together with a thick web of paint—just enough to set off a visual contrast from the flesh tones. Doctors, gymnasts, bowler-bedecked biz folk, nuns, nurses, jockeys, and office men: archetypes defined by what they do.

These are genre subjects, vehicles for plot, rather than studied portraits. Interspersed among the archetypes is the occasional prop for intrigue—a gun, luggage tag, or horse leg diagram deepens the plot. Paintings and drawings are hung in clusters, injecting nonlinear, skewed narratives that rebound the web effect found within the individual paintings.

Would an example help clarify? On one part of the north wall I see a painting of a commercial building, looking particularly Californian and with its loading dock face-out; this leads the eye into the scene from the left. An innocuous painting of a doctor sits to its right. Below that is a gun drawing, an outline really, and to its right, a nurse. The crescendo comes last, as ambiguous adults and children stand soggily in funereal dress. A murder mystery has unfolded outside of the frames. I think.

What should have struck me sooner is the undeniable Wes Anderson influence on Ottinger's work. Think old-timey quirk. In fact, Chas, Ari, and Uzi Tenenbaum are literally depicted here, the only specific reference I could locate outside of a Superman costume. This specificity creates a preciousness and, ironically, a weakness in propelling the story using Ottinger's technique; ergo, the Tenenbaums are mounted solo. There's strength in expendability.

Well, perhaps the Superman costume bridges both worlds. Its iconography overwhelms any imbued character, I would argue. When cannily placed near a government-issue personal identification sheet (hand drawn with verisimilitude) and a painting of a school teacher in situ—the modern-day Clark Kent—the associations brim with hilarity. I stumbled around the gallery aimlessly after a while, rereading and revising each story.

If you do the same, beware of the show's terminus underfoot, the remaining bounty of work amassed and whirlpooling on the chipboard floors. Stacked and leaned in a single pile, there are several instances of pieces same or similar to the "active" wall-hung ones, including some drawing studies. I love that Ottinger has an arsenal of each archetype, ready to repurpose and deploy at will. Red curtains are tacky in a bordello and classy in a Broadway theater. Ibid: literally in the same place. Maybe not where they're from, but where're they at?

(Images: Courtesy of the artist and Johansson Projects)

Posted by Andy Ritchie on 8/23/09
RELATED ARTICLES
COMMENTS (0)
ArtSlant has shutdown. The website is currently running in a view-only mode to allow archiving of the content.