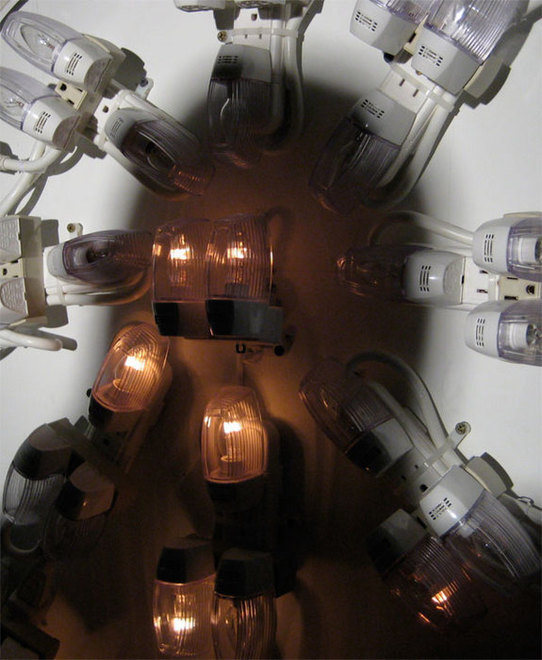 In darker quarters of Swarm, segregated by thick, black velvet in the Project Space, is the inventive installation (essentially a large piece and a smaller one) by Christine Wong Yap titled Dark Into Light. Her larger work studies the balance between absence and presence, slyly coercing Project Space visitors to displace some of the energy within. By blocking one light source, another is triggered, creating a vacuum of light that the work keeps balanced autonomously. In prosaic terms, what she has created is a kinetic, interactive experience in which a starburst-patterned configuration of automatic house lights (awoken by human shade) is doused with a Hollywood-esque floodlight, furthering the spectacle.

In the way it maps the human body, I first associated this larger piece with emerging artist Daniel Rozin’s work, but the differences are easily parsed. Rozin creates kinetic works that mimic, with a degree of gradation and resolution, the details of the viewer; Wong Yap simply fills the dead space with life. Also, Rozin utilizes generic shapes (rectilinear grids being his favorite) while Wong Yap uses—and meaningfully repeats—the starburst shape, with precise formation of lights. This shape could be a firework, star, spark, or a tree—in any case, it speaks of dissipation of energy and outward movement.

While the larger piece is tangibly hot in front of the beam and is “easy” in many ways, Wong Yap’s smaller piece speaks in a lower volume. A light box—which may be on or off when you enter the Project Space—is posted on the opposite wall from the velvet and is comparatively understated and nebulous. It was initially unclear whether the string controlling the light box can or should be pulled, but I generally err on the side of recklessness in a gallery: I yanked. What results from pulling the string (and maybe pulling it a minute later) is more profound in tandem with the larger piece and is a curious tangential play on absence and temporality, making this a sweet, clean, but provocative Project Space experience.

Posted by Andy Ritchie on 2/24/08
RELATED ARTICLES
COMMENTS (0)
ArtSlant has shutdown. The website is currently running in a view-only mode to allow archiving of the content.