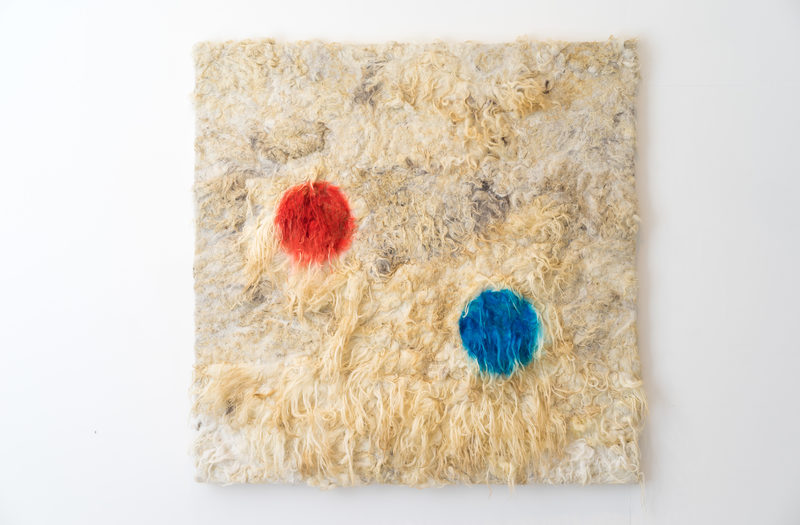 In some way, all things are congealed moments in a longer social trajectory. All things are brief deposits of this or that property, photographs that conceal the reality of the motion from which their objecthood is a momentary respite.

—Arjun Appadurai, “The Thing Itself” [1]

To hear Brigitta Varadi talk about sheep is to hear her effuse about something bigger than wool, felt, or the declining carpet and farming industries in the remote corner of North West Ireland where she lives. Her animated descriptions of how highland farmers mark and identify their sheep spin into ruminations on knowledge, memory, commerce, and social relations—and how each may be sketched onto downy fleeces or mapped onto the rural landscape.

But you don’t need to hear her speak about it; spend time with Varadi’s large, woollen paintings and you will understand how something so procedural—namely, the marking of sheep with brightly colored paint—could be the yarn knitting together an investigation of traditions, commodities, art objects, and the social relations that constitute them.

Originally from Hungary, Varadi moved to County Leitrim, in hilly North West Ireland, in 2001. Sheep farming defines the region’s rustic landscape, with enclosures tracing lines to the horizon and colorful, polka-dotted fleeces shuffling across the mountainside. Varadi, who has used wool throughout her career, first began working with farmers in the collaborative project Talk About Fracking, which amplified the concerns of local residents regarding hydraulic fracturing. In 2014, as she established deeper trust, farmers in Leitrim and nearby Sligo began teaching her about their work with sheep: breeding, lambing, dosing, shearing, and marking.

The resulting project, Markings [2], is a series of large, hand-felted canvases made from regional wool and painted using animal branding fluid, marking crayon, and marker spray. Each painting pays tribute to the farmer whose wool it comprises; painted dot motifs replicate symbols from each farmer’s unique sheep-marking vocabulary. 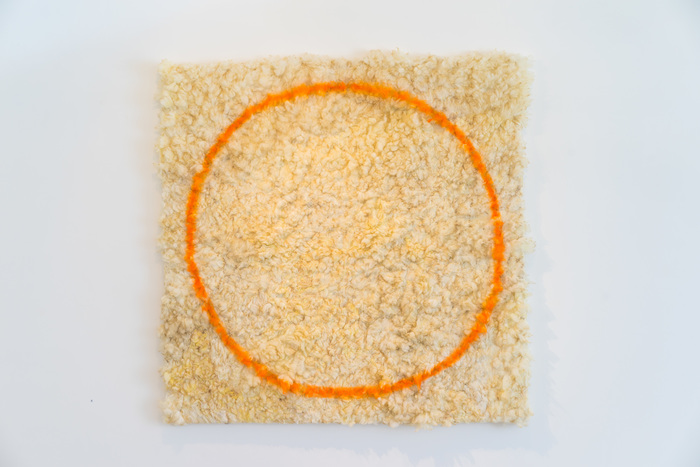 In Lorraine Brennan, an orange line traces a circle inside a square canvas. It’s an abstract gesture—evoking modern art movements like Suprematism and Minimalism—but it’s also the mark that farmer Lorraine Brennan uses to record a sheep as carrying no lamb. The empty circle “is full of the emotion of a barren sheep destined to the next meat market,” describes Varadi. For farmers like Brennan, colors and shapes are cues, a legible code revealing information about ownership, sex, fertility, and vaccinations. The blue and red dots in Noel Ruane, for example, designate a sheep as belonging to the eponymous farmer’s flock. But to understand Markings, you need not know that, say, a green splotch on the chest of a ram means one thing, two red circles on an ewe, another.

The act of inscription—more than the content of the inscribed markings—is paramount. In visual and material fidelity, each artwork represents a person, one whose occupation and knowledge, their ownership and memory, leave a bold mark on the canvas. These graphic representations—and they are both mimetic representations and abstractions—could be equally at home on a damp Irish hillside or in the modern art gallery. In the shared gestures of the farmer and the artist, two lineages come together.

Indeed, embedded into these artworks—literally felted and matted, smeared onto their surfaces—is a history of labor and tradition: men’s and women’s, commercial and domestic, craft and fine art. Like Pollock straddling his drip paintings, Varadi crouches atop the wool as she felts it, counting, rolling a single piece—the fleeces of five sheep—up to 25,000 times. She works each textile as if making pastry, turning it to ensure even shrinkage as its wet fibers hook together. The physical properties of wool fight back, taxing Varadi’s body as she transforms it from raw material into singular artwork. 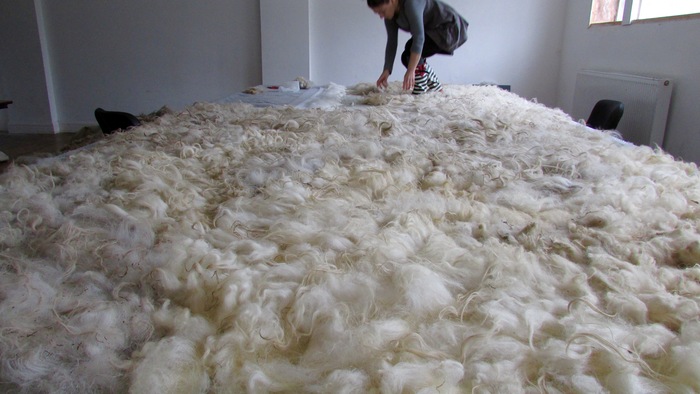 In “The Thing Itself,” social anthropologist Arjun Appadurai writes:

Varadi rescues the thing from stasis. What was once the body of a living animal was briefly a commodity, then a gift (the farmers donated their wool), and now an artwork. Her fleeces are a document, a “congealed moment” in the social life of the wool, but one that acknowledges its own instability. Her paintings are the object in transition, slipping from one phase to another and also from one visual language to another: from a sign to an aesthetic, from the vernacular of farming to the parlance of minimalism.

Her artworks resist discrete ascriptions of meaning from these social frameworks, however. Varadi wrestles with her medium but never tames it into complete submission. Materially, it remains “the thing itself”: raw wool, its fibers reconfigured, but smelling, looking, feeling like itself. Locks pull away from the felted base, each canvas defiantly flocculent, sheep-like. At a human scale—just over six feet tall—these paintings assert their woolliness, suggesting comfort and physical intimacy. In a related sculpture, fittingly titled Transition, viewers are invited to sit inside a fleece-lined box, to touch and surround themselves in the shaggy material, to bury their noses and inhale its earthy fragrance.

But let us return to the farmers, as Varadi’s passion for wool is matched only by her enthusiasm for the people and interactions surrounding it. At a time when traditional methods of farming are in decline, her artworks are vessels, repositories of knowledge and memory. Many farmers have taken up second jobs as the price of raw wool remains low. Three farmers Varadi documented are bachelors, with no children to inherit their flocks or their expertise. They are, says Varadi, “really, really happy that somebody is talking about sheep farming.” 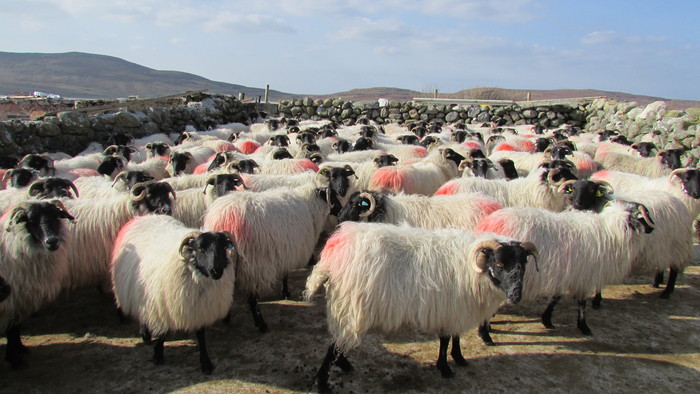 Today, under European regulations, sheep must be marked with a uniformly coded ear tag. But farmers persist in painting their sheep. What may seem like an anachronism demonstrates hard-earned knowledge, pragmatism, and creativity. A few years ago, in Devon, UK, one farmer painted his entire flock orange to combat the growing threat of sheep rustling during the recession (no harm came to the sheep, nor the farmer’s bottom line—none were stolen that season). Like distinctive enclosure fences mended with found objects—Varadi says she can tell whose land is whose just by looking—these visual cues represent a history of human ingenuity mapped onto the bodies of animals and the environment.

The artist recently completed a residency in Upstate New York, a place where first-generation farmers are leaving the city to raise animals for small-batch wool production. Only two larger, traditional sheep farms remain in the area. “These newcomers are setting up a farm after the traditional knowledge is gone,” Varadi says, “There is a gap between tradition dying out and the new generation starting over, and in that gap there is a lot of lost knowledge. A lot of lost information.”

Back in Ireland, Benedict Gallagher, a farmer whose wool appears in Markings and other projects, realized he hadn’t even told his sons the things he had divulged to Varadi about his vocation. As oral tradition breaks down, material culture—maintaining its own rich social life, but also imbued with meaning and legacies shared amongst people—steps up. Through mark-making and learned, practiced gestures, Varadi inscribes and embodies the memories of a place, its people, their labor, and her own. Markings is the residue of this memorializing practice.

“There’s no record of these markings and there’s no record of this creativity,” says the artist. “In a small way I am trying to record the tradition for future resources, not only by written knowledge, or images or recordings, but with the work to awake memories through all the senses in people.” In their journey from one space, one cultural language, to another, Varadi’s woolly canvases are record and receptacle, something owned and something given, something remembered and something passed on.