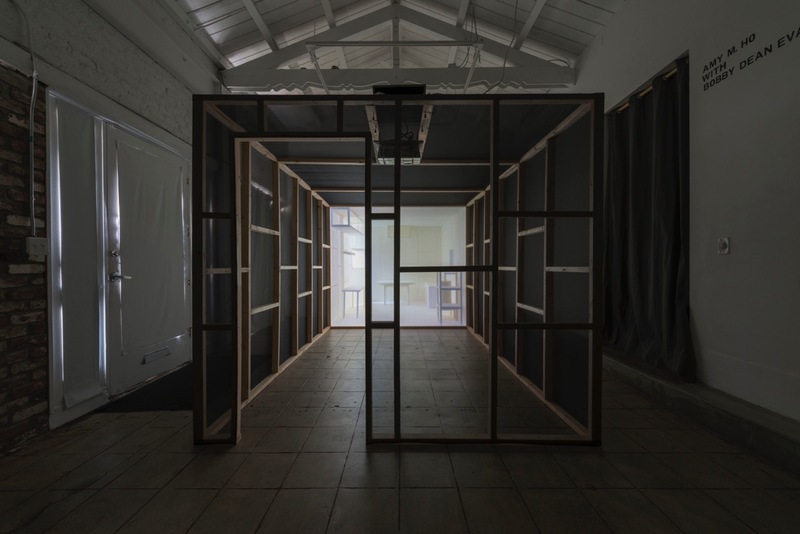 Visitors enter a dark gallery. As their eyes adjust they find themselves faced with a wooden frame structure occupying almost the entire space. They can walk inside of it or around it. Projected on one wall of the structure is a video of a white, humble room furnished with simple white stools, tables, and shelves. Every fifteen minutes a small origami crane mobile appears near a doorway, then disappears. There is something off-kilter with the objects on screen; they are life-size, yet they seem to be made of cardboard or paper, lending them a fragile and ephemeral quality. The projected room has a peaceful yet melancholy feel, like a vintage black and white photograph or a marble statue frozen in time, a relic of the past.

The installation is by Oakland-based artist Amy M. Ho, on display at Chandra Cerrito Contemporary (CCC), also in Oakland. For the last four years, Ho has worked as an art educator to men incarcerated at San Quentin State Prison. The CCC installation, titled The Garage, was made in collaboration with Bobby Dean Evans, Jr. and is the first in a series of five Spaces from Yesterday installations that will travel to four other galleries. Working with a different inmate artist for each, Ho will create new structures and spaces for each location. The next installment opens at Royal None Such Gallery, in Oakland on October 21.

Specifically, Ho asked Evans and four other artists to create drawings of places that were important to them before they were in prison. She then uses those drawings as source materials to create the installations. While Ho is working with the inmates, they share their experiences and lives before they were in prison. The “garage,” of this exhibition’s title, comes from Evans’ memories of the garage at his childhood home, a quiet place where he would retreat to think, pursue woodworking, or fix things, such as his car or motorcycle. “Decades old, these memories intertwine with imagination and stay alive in their minds as sacred ties to the outside world,” she says in the show statement. Other personal elements make their way into the collaboration as well: for example, she and Evans discovered that they both enjoy working with origami, hence Ho’s inclusion of the origami mobile in the installation. The installations aim to honor the personal stories of Evans and these men, while also providing an informative and contemplative space for visitors. 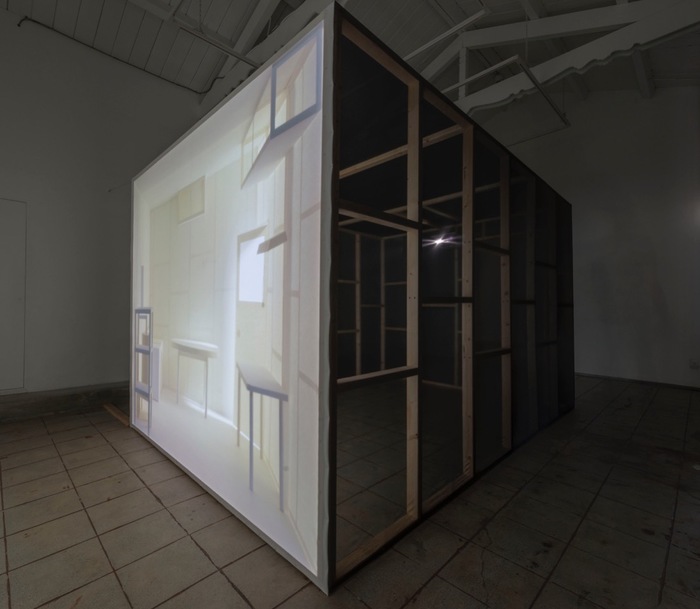 Ho is known for installations that incorporate video projections in life-size scale, which she makes by constructing small dioramas out of paper and mat board, lighting them, and then filming them. These replicas are uncanny—their realness and fakeness all at once create a certain level of cognitive dissonance. “By creating hyper-artificial environments, I aim to bring attention to our existence in the here and now,” Ho says on her website.

“We live as both material and psychological beings. Our mental relationships to the environment are not separate from our bodily relationships yet our minds and bodies navigate the world in entirely different ways,” she continues. In The Garage, the viewer faces an illusion of the real on a flat wall, the eye seeing it as a dimensional space that can be inhabited. The desire to enter is in direct conflict with the physical inability to do so.

Confined within prison walls, inmates have unique physical limitations that are not always in sync with their psychological worlds. Just as viewers of Ho’s work can only look at the spaces she creates without entering, inmates can only look to the outside. Both viewers and inmates experience spatial anxiety, yet it is utterly and physically different—for the inmates have no choice of where they can move about, enter or leave. The installation, then, is only a symbol for what other people must endure on a daily basis. It is for these reasons that Ho finds the work she does at San Quentin so important: the things that we take for granted on the “outside” are not optional on the “inside.”

Essentially, the projects are a way for the men to express themselves, but Ho’s art classes also provide physical and psychological benefits that often accompany the art-making process. A committed, regular routine provides time to develop their creations and a space for introspection and storytelling. “I feel like a receptacle for these stories,” Ho said in an interview with Little Paper Planes on Artpractical.

According to a study conducted by Larry Brewster for William James Association Prison Arts Project, arts programs helped participants “relieve stress, make better choices, connect with family, and have a better understanding of self.” Many of the works created in the programs are extremely detail-oriented figurative and narrative work, generating a tremendous sense of pride and accomplishment.

As with many public art programs, the budget for art supplies is slim and, in prison, access to a variety of materials is restricted. Ho and the men often come up with innovative solutions for making art. For example, Evans predominantly used paper to create a relief collage of the home where his mother lives. Carved pencils create an assemblage frame, and dirt from the yard creates a stucco-like texture on the walls of the home. Evans was transferred from San Quentin to Deuel Vocational Institute in Tracy before he could finish the piece, so Ho completed it for him with his specifications. The piece hangs in the back gallery space and will be gifted to the artist’s mother after the exhibition closes. 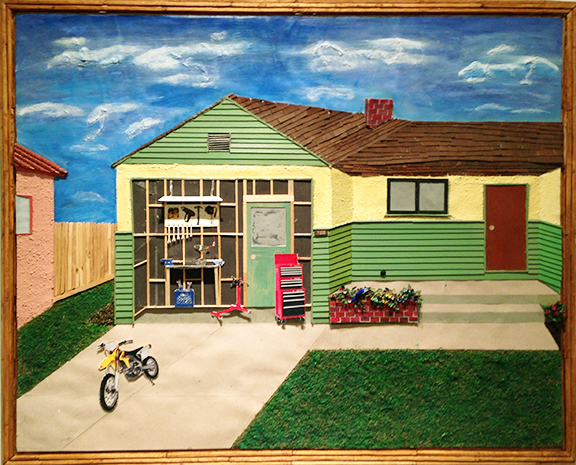 In 2013 the San Quentin News published a story about Ho’s art practice and her work with the inmates in the art program. The paper is produced by inmates and is the only prison newspaper in California. “Ho has helped the men in the art class work on dioramas, which are scaled down models of the spaces people occupy every day,” the piece reported. “She says her time at San Quentin has helped her learn more about people and to shed any preconceptions she may have held before working with the men inside the walls.”

During her time teaching Evans, the two exchanged letters, which were intended to be on view for visitors to read in the gallery; unfortunately, they were removed from the exhibition offerings by an unnamed third party prior to the opening. Ironically, on a shelf across from the empty display case where the letters could have been read is the Code of Conduct provided by the California Department of Corrections and Rehabilitation. The comprehensive document outlines the rules and regulations associated with behavior and action of inmates while under prison system jurisdiction. It sheds light on the complexity of place and how one navigates their identity knowing that any movement can be noted, observed; everything is scrutinized, particularly letters. 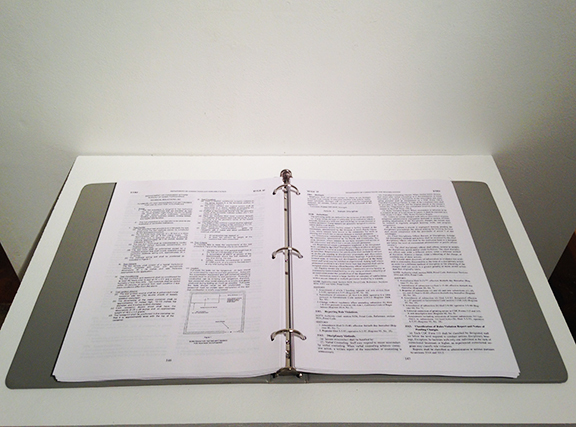 Incarceration is an ongoing issue, but the exhibition opened at a particularly important time. On September 9, the Incarcerated Workers Organizing Committee (IWOC) released a “Call to Action Against Slavery in America” on their website, calling for a national prison strike to acknowledge the harsh working conditions of prisoners and to demand fair labor and wage laws. “The effort culminated in a mass refusal to report to prison jobs on September 9, the anniversary of the 1971 Attica prison uprising,” states The Intercept. Surprisingly there has been little mass media attention given to this issue, in part because the prison system is very strict about what kind of information is made public. The disconnect between inside and outside can sometimes be profound—physically, psychologically, and even legally.

In reflecting upon the strike in relation to the exhibition, rehabilitation come to mind. Evans has served approximately 20 years of a 25-to-life sentence, so his future is unknown. While incarcerated, he contributed to Disrupting the School-to-Prison Pipeline, released by Harvard Education Press in 2012. The book emphasizes the failed systems, beginning in public schools, that result in many people from underserved communities being siphoned into the criminal justice system. People who have been incarcerated struggle to find meaningful work once they are civilians again. The skills they learn from their prison jobs are not always transferrable, and employers are apprehensive to hire people who have been incarcerated. It seems evident that reform needs to be better aligned with rehabilitation.

Just a few days after Space from Yesterday opened, solidarity graffiti supporting the prison labor strike appeared in Oakland. Alameda County jails have an average population of 4,000, not unlike nearby San Quentin, which as of August has 4,113 inmates. Over 2,220,000 people are incarcerated in the US prison and jail system, and over 4,751,000 people are on parole or probation—that’s almost 7 million people under correctional supervision. At San Quentin, 700 prisoners are on death row; the prison houses the only gas chamber and death row in the state of California. In its meditations on memory and space in such close proximity to this institution Ho's work grows much more poignant. Space from Yesterday reminds us of what we take for granted and what we tacitly allow to happen to others; these artists have given us a shared moment of their memories from when they, too, were on the outside.