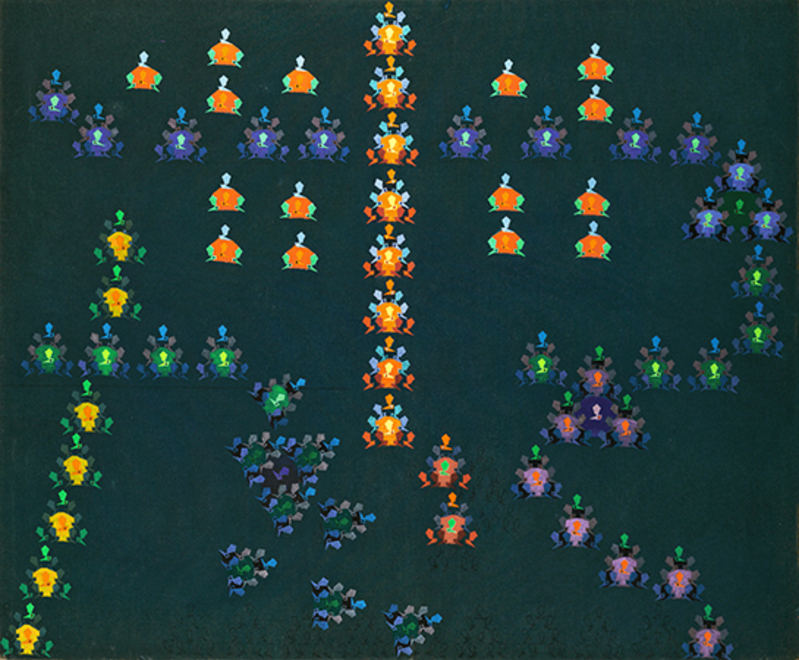 A Man of All Time

Krowswork’s current exhibition is a carefully considered retrospective of the little known but deeply respected artist Mark Baum. Baum, whose life spanned 1903 to 1997, had his last solo exhibition in 1969 at the Ogunquit Gallery in Maine. However, in 1983 the Metropolitan Museum acquired two of his  paintings, he received a Rothko grant in 1972, and is included the Whitney, Frick, Harriman, and Stieglitz collections.

Polish and Jewish, at the age of 16 Baum deftly walked through the border of occupied Germany into Denmark, through Copenhagen and on to America—to  New York City. It was that same independent, unfettered, forward-moving gait with which Mark stepped and transited throughout his life.  He was not long in New York before he turned to painting. Originally painting figuration, mostly landscape, he began a conversion to abstraction concurrent with New Yorks burgeoning abstract expressionist movement. Yet, Mark was at odds with abstract expressionism. He found a greater affinity with the non-objective concepts of the Modernists and their interest in a spiritual inner life, and somehow that led him to a body of work that adroitly coincides with contemporary post-modern culture.

The exhibit begins with his early, flattened, urban landscapes, similiar to what  he showed at the Whitney Galleries in 1929, and  we then follow his path  along a decidedly spiritual quest into abstraction.  Looking back at the painting, Aspirational Staircase, from 1948, Mark recognized an abstract patterning in its ascending stairs. From there his paintings open increasingly into a patterned interior space that at first seems to recall the aesthetics of his Polish origins (imagine floral embroidery falling into deep space) and then take a long  leap into a language of patterning that mirrors—way ahead of its time—binary coding  (referencing also circuit boards of which he had a collection), Buddhist thangkas, Kabbalistic symbolism, Fibonacci sequences, as well as cartoon.  His final painting in the show is a patterned but minimalist beauty that takes us through the door. Dark and seductive, Welcoming Truth (1994) calls us into the refuge of a deep, spacious and uncluttered unknown.

Posted by H.Maslon on 2/26/16
RELATED ARTICLES
COMMENTS (0)
ArtSlant has shutdown. The website is currently running in a view-only mode to allow archiving of the content.