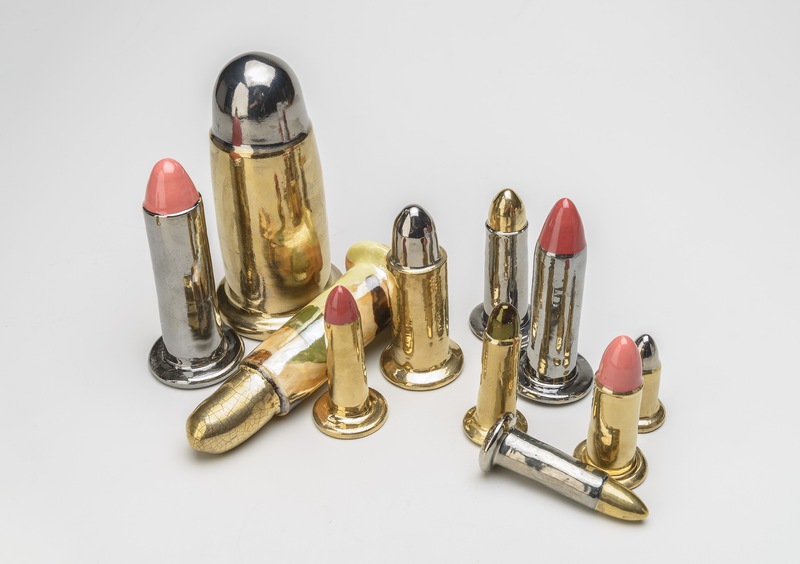 The Object of Guns and the Subject of Violence: The American Gun (Art) Show

A report published in September 2015 on 247 Wall Street stated that Oakland is the third most dangerous city in the United States, following Memphis and Detroit. The Bay Area in general, from the East Bay to the South Bay, is plagued with violence, though the entire nation could use an attitude adjustment—particularly when it comes to gun violence. I live in Oakland, and as can be expected when someone’s town or city is wracked with hostile incidents, there is a tendency to localize fear and pain, to localize conversation. Sometimes art and daily violence intersect, sharpening the distinction between tragedy and expression.

In November, Marquese Holloway was charged with shooting and killing artist Antonio Ramos in Oakland on September 29, 2015. The gun Holloway used to kill Ramos was stolen from the car of a federal Immigration and Customs Enforcement agent, who reported it stolen on September 13. Ramos was painting a public outdoor mural at the underpass of the 580 freeway when he was confronted, then shot in front of peers working nearby. The mural was by the Oakland Superheroes Mural Project, led by Attitudinal Healing Connection of Oakland (AHC). AHC is an Oakland-based organization that works with individuals whose lives have been affected or influenced by violence. They provide workshops, particularly art programs that encourage people to make “positive choices to break the cycle of violence for themselves and their communities.” The chilling irony of Ramos’s death is beyond cruel: an artist shot while working on a community project that supports anti-violence—it’s just inconceivable.

Just three days after Ramos’s death, on October 2, American Gun Show, an art exhibition curated by Dorothy Santos and James Morgan, opened at Works gallery in nearby San José. Santos remarked that several people pointed out that the show was “timely,” while others thought it to be “bad timing.” But both statements are somewhat misguided. The truth is that gun violence is prevalent everywhere, on a daily basis, be it perpetrated by citizens, insurgents, terrorists, or police. 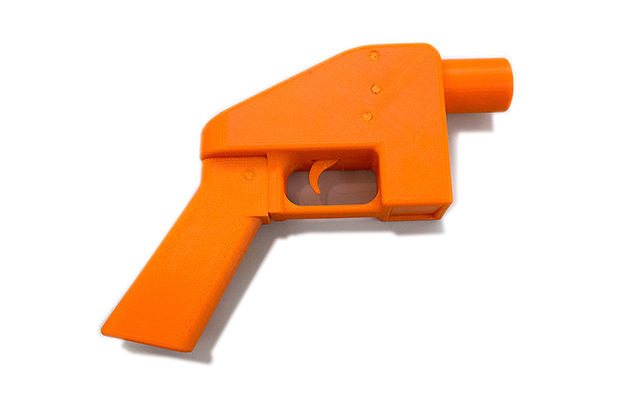 The impetus for the exhibition was the case of Cody Wilson, the crypto-anarchist, co-founder of Dark Wallet, an online wallet tool for securing Bitcoin, and the founder of Defense Distributed, a non-profit organization that develops and distributes open source gun designs to the 3D printing community. In 2013 Wilson created a functional single-fire pistol called the Liberator, which was built using a 3D printer. In two days the plans for the Liberator were downloaded over 100,000 times before the US State Department Office of Defense Trade Controls demanded that the plans be removed. When Morgan heard about it, he was curious about what it means to make a gun, and printed one himself, which took approximately 22 hours to make. “It was the first time that Morgan started to see relationships with the Second Amendment,” Santos explained.

American Gun Show aimed to examine the concepts of online networks, and communities that are built there, particularly looking at print-on-demand technologies and sharing ethos, open sourcing, and free access. The curators wanted to also make sure that the notion of “networks” also included other forms of community, particularly queer, trans and people of color. Identity was another theme that permeated the show, whether pertaining to issues of access; the impact gun ownership has on citizens’ right to bear arms; or the impact of violence. The curators’ statement reads: “As curators, we explored artists, artistic practices, and expressions that can offer a form of neutrality or balanced perspectives on the issue of gun creation and control. This show is an exploration of the American psyche and history steeped by gun violence.” As with many art exhibitions, the show was a catalyst for conversation, bringing difficult topics to the fore. American Gun Show contends with the Constitution’s First Amendment governing free speech (or in this case art), and the Second Amendment governing the right to bear arms.

Santos and Morgan wanted to create an open platform for discussion and to build a greater understanding between differing views. “We didn’t select people because of their politics, we kept it really open and focused on the work,” Santos said. There are over 20 artists in the show, whose personal perspectives were both pro and anti-gun. The range of work was broad, including sex toys in the shape of guns, works testing DIY armor, 3D-printed objects, and film. 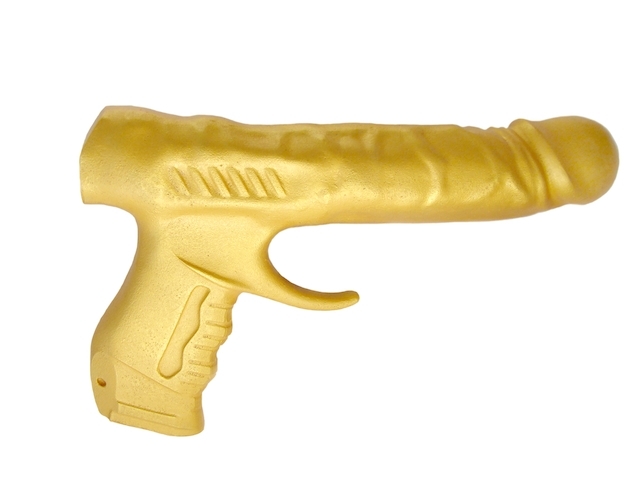 There are two works in the show that use actual guns as agents or tools to make the work. David Bowen’s Fly Revolver is an unsettling and harrowing experiment in sharpshooting using houseflies as targets. The absurdity of the project brings up many issues: firstly, the perceived value of targets (and in this case, live beings that are houseflies); secondly, the chilling science of accuracy; and thirdly, distributing responsibility—think, “guns don’t kill, people do,” but without a person behind the gun. A large plastic sphere contains several dozen houseflies that swarm around a target. The gun is fastened to an armature that points it in different directions, based upon the flies’ movements. Bowen states that the flies are “essentially the brain of the device controlling the revolver and determining when it is fired.” The gun erratically jolts and wavers, without any seemingly rational patterns or intention, further imparting a harrowing affect if one were to imagine a person on the other end waving a gun in this manner. A shot rings out when a fly finally lands on the center of the target. The gun is a Zoraki made by Atak Arms, which is designed for blanks, but it can still be harmful and in some cases lethal, and the sound is nonetheless unnerving. 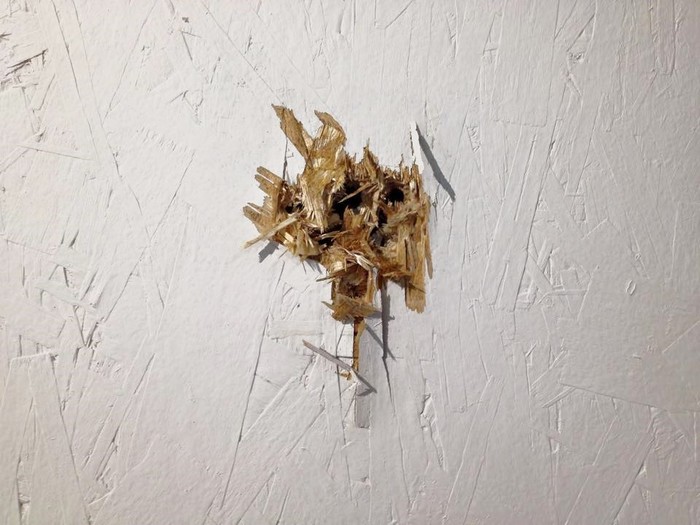 Henry Witecki, Untitled (performance), 2015, Gunshot on particle board. Courtesy of the artist

Henry Witecki created Untitled (performance), a conceptual work that involved a theoretical “performance that took place in the gallery,” where witnesses were invited to see the artist shoot the gallery walls. In reality, Witecki legally shot several panels of plywood at an outdoor shooting range, which he then installed in the gallery completely plumb with the existing architecture. The piece addressed multi-fold concepts of safety, shelter and perviousness, and of witnessing a crime. “Crime and murder are…the human condition expressing itself in a moment,” Witecki shared.

More importantly it is vital to look at gun ownership itself and citizen’s ability to understand how they are implicated with it as a political tool. “The fact that the gun is the most popular tool used for acts [of political resistance or crime affiliated with regaining social injustice, restitution, or domination] demonstrates its power, but also, crucially, these acts demonstrate that the power of the gun is transitive,” he states. Meaning: the gun itself is a sophisticated object that can be directly used as a tool of power. Witecki went on:

Very few power structures in our current systems are transitive through readily available tools, meaning power is not something someone can easily acquire. For those who are in an always already marginalized position, the gun is, in some cases, the only remaining option to gain enough power to overcome their circumstances of oppression, if only momentarily.

By taking direct action coupled with complex discussion about serious issues, Witecki educates viewers that the gun is more than a symbol and tool wrapped in metaphor.

Other works were more subtle and poignant. W&P Chords by Raheleh Minoosh Zomorodinia is a sound and video piece that uses the clanging of bullet brass to create a haunting resonance akin to incessant dripping water or delicate tolling bells. The chords and tones symbolically repeat, mirroring unending violence. The shells and casings are slowly lined up in rows as if they are bodies. Morehshin Allahyari is currently working on a series of 3D-printed sculptures that reconstruct the ancient relics that have been destroyed by ISIS. For this show, the 3D-printed Pig Gun featuresa pig with a gun on its back. It is from the series Dark Matter, which juxtaposes things  that are taken for granted in the US, but that are forbidden in Islamic Iranian culture: in this case the consumption of swine and owning of firearms. UNSTOPPABLE is a bulletproof fabric designed by micha cárdenas, Patrisse Cullors, Edxie Betts, and Chris Head. Bulletproof  clothes were made as prototypes to begin conversations about ending the murder of black lives, and trans people of color. “Their argument is that guns are not going anywhere so how do we protect queer, trans, and people of color from gun violence?” Santos explained. Nancy Floyd has used guns and women in her series Ten Point Nine, featuring the US women’s rifle team. “In many portrayals of women and guns we think of Laura Croft, or Quinton Tarantino Kill Bill type women who are very buxom and sexy,” Santos points out. “The beauty of Floyd’s portraits is that she is capturing women in a serious light.” 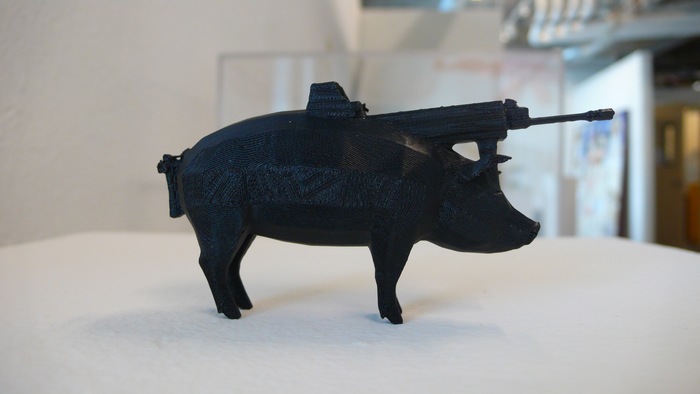 During the exhibition the curators held a round-table dialogue in hopes of starting conversations within the community and to hear what the public had to say about the show and about guns. Santos used to be very anti-gun, but once she started doing her research and talking to more people, “my views became more balanced,” she said. “Gun owners were there, and they felt that they needed guns for protection. On the other hand there were other extremists that felt that no one should have guns, not even the police.”

Two weeks after the show closed, the Bay Area was once again outraged by violence. On the busy afternoon of December 2, in the working class neighborhood of Bayview, more than eight police officers pursued Mario Woods as the suspect in a stabbing a few blocks away. After they subdued Woods with pepper spray and bean-bag ammunition, they attempted to apprehend him, but he would not drop the kitchen knife he was holding. Fearing that he was brandishing the knife at their colleague, officers proceeded to shoot Woods 15 times. In plain sight of neighbors and city busses traveling on their usual routes, citizens documented the horrifying scene on their phones and video recorders, sharing the images immediately on public television and social media. Viewing the videos is blood curdling and heart wrenching—warning: the footage is extremely graphic.

Violence in the Bay Area continues—a suspect is still at large after shooting 19-year-old Carlos Misael Funez-Romero multiple times on January 9 on the BART (Bay Area Rapid Transit) train as it stopped at the West Oakland station en route to San Francisco. But according to the website Gun Violence Archive there have already been over 600 deaths by gunshot in the United States this year, meaning January 2016. As Santos said, “there will never be ‘good timing’ for a gun show.” And since gun violence is practically a daily occurrence across the nation, happening at any given time in any town or city, it is illogical to say that a show about guns would be bad timing.

The truth is, anytime needs to be a good time to discuss the issues surrounding guns, be it ownership or responsibility, laws governing gun acquisitions or even materiality. “Everyone thinks it is so radical to 3D print a gun,” Santos remarked, “but we can go to Walmart and purchase a gun very easily.” Guns as objects will continue to be purchased, made, fetishized, coveted, represented… despised. And the value of human life will continue to be considered on artists’ terms. The conversations need to keep happening until greater change is made. The fear and pain is real, extending beyond gallery exhibitions and much farther and deeper than our own towns and cities.