The Intricacies of Seeing, Experience, and Memory: How Can Paper Transmit Art's Visual Purpose?

Pen to paper is writing or drawing. Paint to paper, or canvas, is painting. Paper to paper is collage. As a symbol, paper is a proxy for expressive efforts at large. With the exhibition Fractured: Works on Paper curator Rachel Moore uses work from 11 artists to remind us that the concepts we now so readily associate with digital technology—fragmentation, surveillance, hyper-subjectivity—are also intrinsic to what may be art's most primal faculty: sight. Fractured's scope is ambitious. 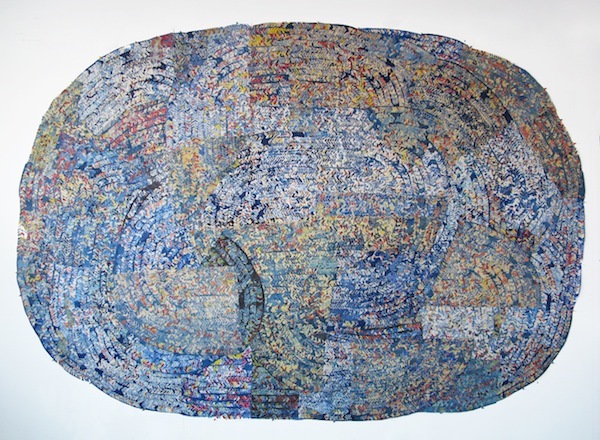 Just off the touristy main drag in Stowe, Vermont, Fractured is installed at the Helen Day Art Center, which operates from the second floor of the town's old high school—a veritable beauty of New England architecture that opened in 1863. Vermont's relative non-reputation as an Art World destination is not lost on the center's curator. Moore addressed the potentially sensitive subject directly: “We focus on work that is high quality and high calibre both regionally and internationally in order to raise the level of work that is presented in Vermont—to give access to artwork and ideas...that our residents may not have the opportunity to see otherwise.” The show is not merely a sheer effort of big-name force, but instead mixes work from names such as Dawn Clements, Olafur Eliasson, and Kiki Smith with lesser-known artists—part of Moore's conscious effort to keep exhibitions “fresh, new, and with the air of discovery, while providing the rare opportunity for emerging artists to show with internationally renowned artists.” 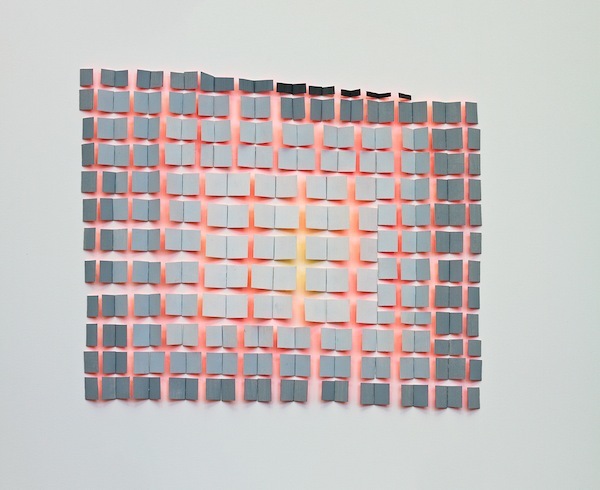 The works that most directly address the biological process of sight are Eliasson's three color circles and two works by Joan Grubin. Eliasson renders basic color theory as large irises, one for each primary color, constructed with three sheets of overlapping paper. Grubin's Pink Line Grid, tucked on the wall behind the gallery's admissions desk, is a diminutive rectangular installation that uses the reflection of paper hidden beneath black and grey outward-facing sides to cast tantalizing pink and gold hues on the blank wall. Grubin's All That Glitters shares the premise of optical illusion but has a more subdued playfulness. 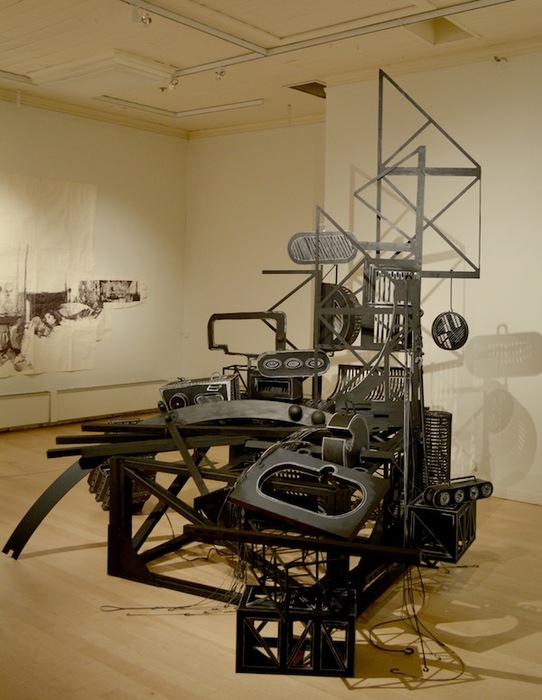 The dialogue between Dawn Clements' wall-spanning scenes and Jane South's rigid abstract structures is a crucial pillar of the show. South's Excerpt is front and center, massive in comparison to everything else. While much of her work (including three smaller pieces in Fractured) is organized for compactness, Excerpt has come a little undone. It is a beautifully busted amalgam of pseudo-technological detritus, a made-up recorder and conveyer of audio-visual material built mostly of hard edges and right angles.

To the left of Excerpt, Clements's Mrs. Jessica Drummond's (My Reputation, 1946) spans an entire wall, a ballpoint interior scene whose titular subject is the character of a romantic wartime movie starring Barbara Stanwyck. If South's sculpture is invented ocular machinery, Clements has turned herself into a highly subjective recording device, re-asserting her own inner world and timeline within the literal interior of a pre-existing cinematic framework. Clements changes scale, zooming in and out of her own reconstruction, with tiny notes covering the whole scene relaying names, dates, and reminders, such as “instruct my sorrows.” The “magic” and assumed immediacy of the visual technology South references is countered by Clements' organic approach, reminding the viewer that there is always at least a figurative onslaught of associations behind every document of memory, some of them almost, if not completely, incomprehensible. 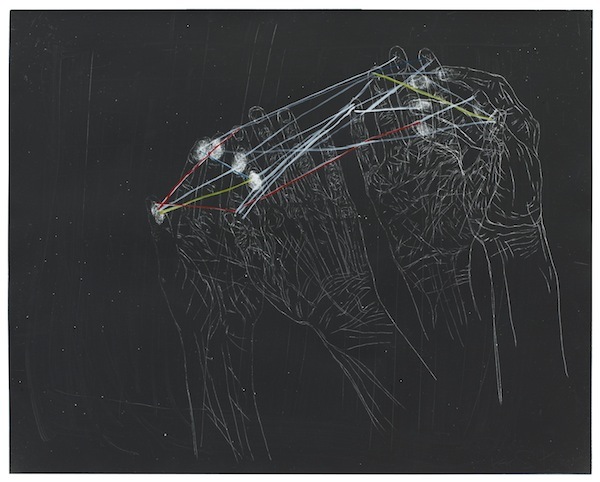 Clements's domestic inclination echoes in works by Beka Goedde, as well as a Kiki Smith print. Goedde's Chord looks like an updated version of a colorful braided rug, composed of layer upon layer of herringbones in watercolor and gouache—not one rug, but ten, or a hundred, or a thousand. Smith's Evidence No. 1 is a 2015 cliché verre print depicting a game of cat's cradle, bringing to mind rainy day boredom or feminized playground games. The sketched hands overlap like pages in a flipbook, and white fingerprints give somebody away.  The viewer has no way of knowing if this is a game between one or two people, if it is meant as a still or moving image, a joke about types of recording, and the futility of evidence, without context.

Wall-mounted sculptures comprise another node of Fractured's impulses. Leonardo Drew's Number 134D and Etty Yaniv's At that moment, all spaces change are highly textural pieces that evoke nature's balance of chaos and order, but it's a sentiment that seems a bit astray.

Fractured feels sly, and not least because of its ultra-unpretentious presentation in an unexpected location. It is a clever show that asserts, with little fanfare, that the intricacies of seeing, experience, and memory are still being thoroughly investigated in one of art's most fundamental materials. Moore's success is that she did not put together a heavy-handed rebuff of hi-tech art, but instead uses a very simple premise to illustrate that the chasm between optics and understanding is, and might always be, a new frontier.