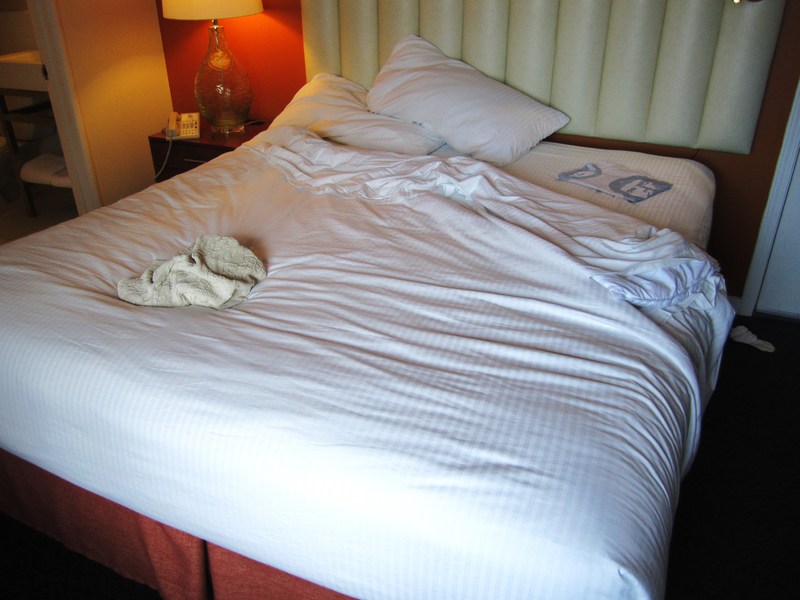 Aside from artMRKT, two other art fairs happened in San Francisco this past weekend: StARTup Art Fair and Parking Lot Art Fair. Each attempted to unfold controversial aspects of what it means to gather en masse, and to expose the public to a variety of artists in one place for a concentrated amount of time. The venues missed and seized opportunities, respectively, and each presented their own set of risks surrounding the art fair model. 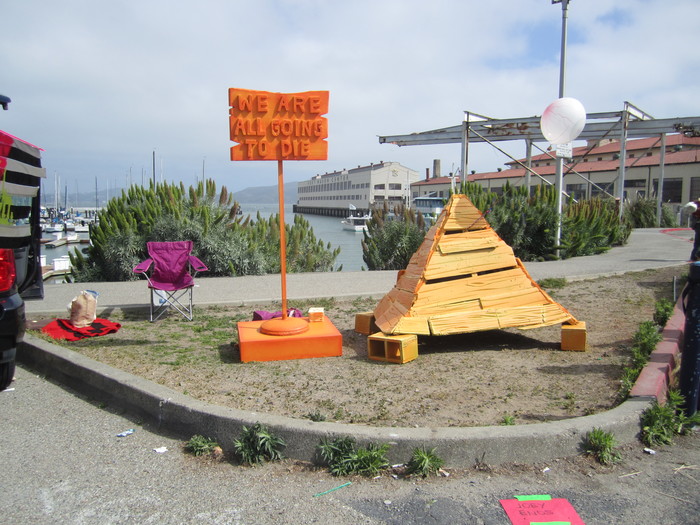 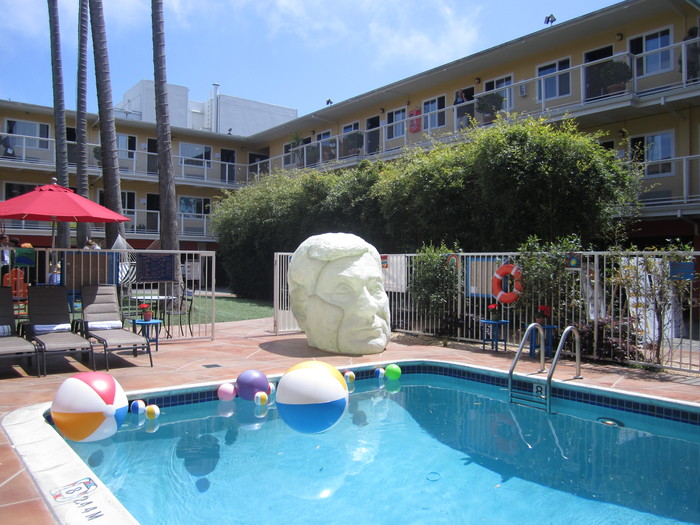 stARTup, which was held at Hotel Del Sol, came into fruition last fall when co-Founders Ray Beldner and Steve Zavattero wanted to create a space specifically for artists who are not represented by galleries. Following the satellite hotel fair model, such as that of Aqua Art Miami, in which hotel rooms are typically occupied by galleries representing artists, stARTup attempted to turn the tables. The vision was that artists could sell their work on their own terms, keeping 100 percent of the sale proceeds. All of this sounds very founded in art advocacy; however, the logic that artists should invest their own money in a fair platform for exhibiting their work is still problematic—one is tempted to say it is a case of “pay to play.” Nevertheless, the artists do get a bit more for their money, as the arrangement also includes other perks that fairs offer, such as press coverage and, of course, exposure. The fair was sponsored by Shopify, and the organizers held workshops offering tutorials for how to complete a transaction and to follow through with collectors so that the artists could ring their own sales. 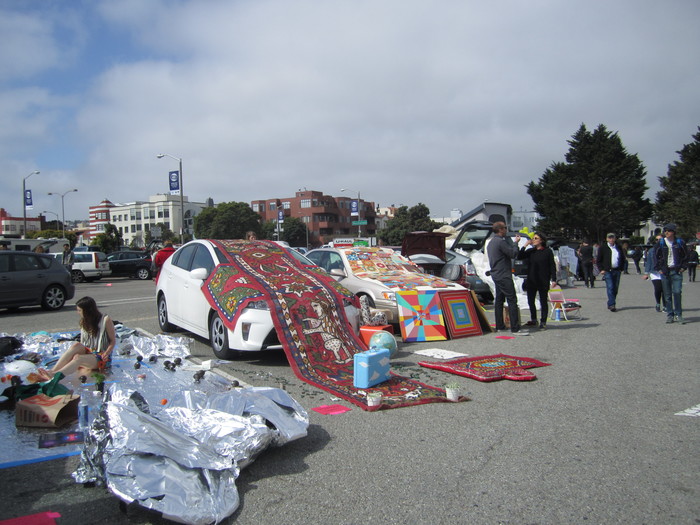 However, the business model of the stARTup fair was too spontaneous in terms of generating sponsorship to front the cost for artists. A call went out on Facebook and other social media outlets to announce the platform and to entice artists to participate in a juried panel (for a submission fee) to exhibit at the fair. If selected, the artists would invest their own money—in excess of $2,500 or more—to participate. The fair founders put up the money up front, and the artist fees were required to cover the cost of operations such as insurance and security staffing. But this rationale seemed to be clouded by the notion that the investors needed to recoup their costs, whereas the participating artists’ recuperation of funds was dependent on sales. The likelihood of selling at a fair is ambiguous—as with any kind of venture that doesn’t have the history or the substantial support to glean interest from buyers (as the more established fairs do).

Thus, there are positive and negative arguments for the entire venture. Fairs can be an advocate for artists; one of their purposes is to elucidate what art is doing in the world. Yet for the most part the fair was a missed opportunity for artists to do something more controversial or to make a statement in situ, taking the hotel as a conceptual site into consideration. The fair seemed to be too aligned with the baggage that comes with commodification, rather than focusing on the conceptual or intrinsic value of the art being represented. The fair did, however, feature (at no cost) several non-profit art organizations including Root Division, an artist residency and gallery space, and Creative Growth, an organization from Oakland that educates artists with developmental, mental, and physical disabilities. Heather Marx also sponsored artists to do site-specific works, including Paul Clipson’s sound and film piece installed in an outdoor stairwell. 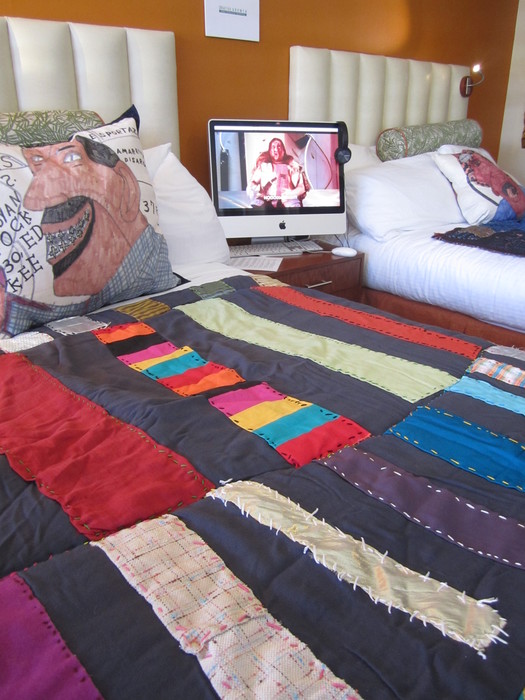 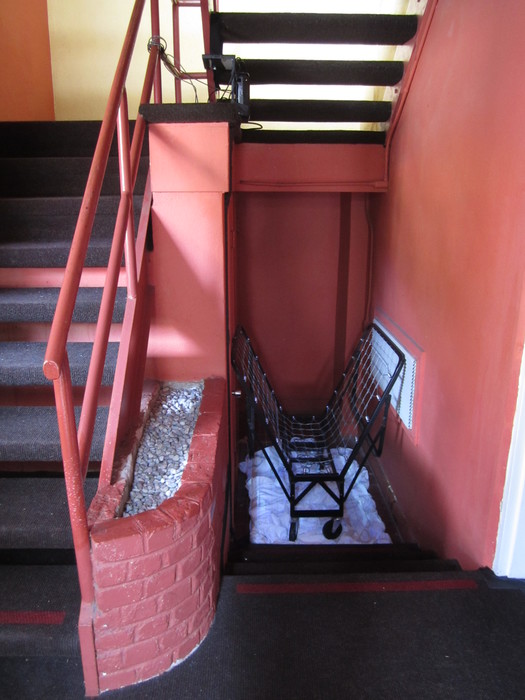 Overall, the artists were challenged with respecting the space constraints, but it seems that the long leash given the artists to do whatever they wanted with their rooms (and many had really tasteful and imaginative ways of dealing with this) worked best for those who could wrap their heads around the strangeness of the rooms or whose practices were more site contingent. In short, the rooms needed to be curated; many artists would have benefitted from having their room curated—had the emphasis been on showing their best and most challenging works. Instead many showed several selections from multiple bodies of work or small works that could easily be sold and taken away. Though a necessary business strategy, it only perpetuated the fair commodification problems that plagued it in the first place. Painters suffered the most in this setting—though there were some stand out works.

Painter am Stöhr, for example, created a bright and inviting site specific work especially for the ceiling of the room, which she encouraged visitors to experience while lying on the bed looking up. Her multi-colored, expressive works on Yupo paper created a dizzying and psychedelic effect on the eye, which Stöhr equates with the crisp and sometimes glaring California light. Jennifer Kaufman removed the beds and included two large eight-foot canvases resting on cinderblocks, in addition to creating site specific adhesive vinyl wall drawings throughout the space, including on the floor and ceiling. In both of these cases the artists took the opportunity to make bold statements that readily conveyed the meaning of their works as not simply formal commodity, but as bold statements about painting’s potential to activate space. 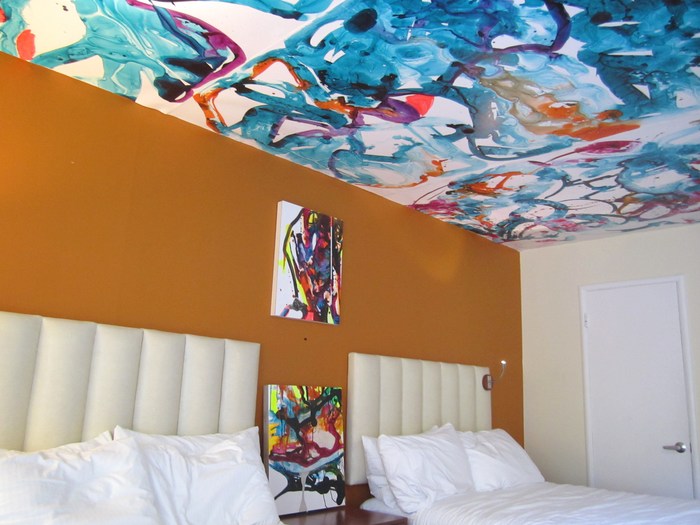 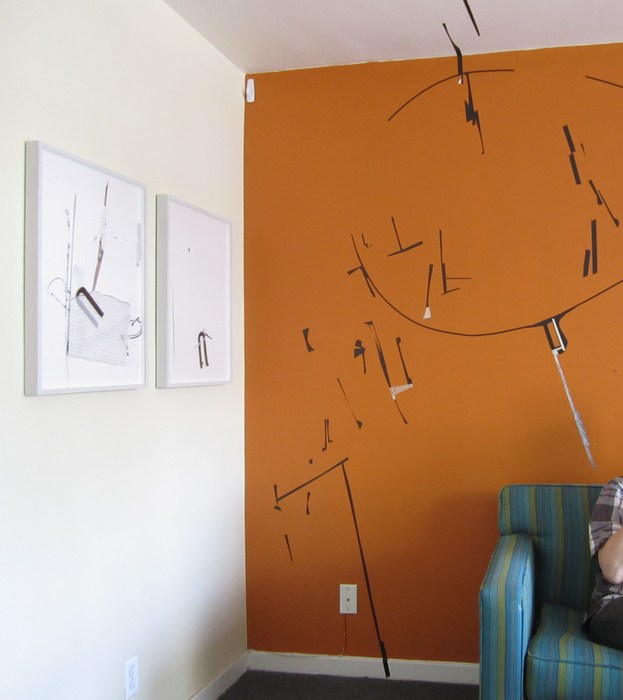 Conversely, Chris Thorson used the room as an all-encompassing installation that directly commented on the hotel room itself. The bed was mussed—its pillows and blankets arranged as if someone had slept there—a carefully folded t-shirt (Frenemy) and crumpled cable knit sweater (Rock), both fabricated out of gypsum Hydrocal were set on the bed. Other trompe-l'œil Hydrocal accoutrements scattered the room, including a banana (Cavendish III), grape stems (Thompson Seedless I & II) dirty socks (Bro Palace series) and factice remote controls (Chameleon series) for the television; which she later turned on to daytime tacky game shows. The installation was so convincing that many people peeked in and went away, thinking that the room was in disarray and not cleaned up. One visitor came in and stated: “I’m not sure what’s the art.” This was a good thing.

Thorson was ambivalent about participating in the fair, and chose to use the opportunity as a way to challenge traditional art systems. The entire room was transformed into something that it is not, while still maintaining an estrangement from the fair context through the careful use of the objects that she dressed in the space. The installation was titled The Stranger, after Albert Camus’ book of the same name. A thoroughly convincing set of cast silver and bronze keys also titled The Stranger are set on the bureau next to the actual hotel stationary notepad and a lone Hydrocal glove from the series Lost. At work in the room was a conceptual double entendre between the concept of the “guest” as someone who visits a hotel, and the concept of gallery-goers as visitors. The title of the work becomes all the more poignant when considering that gallery-goers are not considered guests at galleries, but rather strangers to the work they view—always on the outside looking in or at the work. 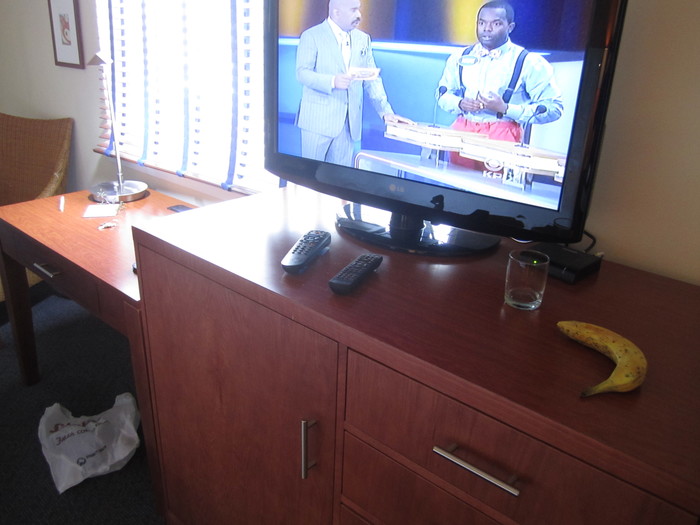 While taking some issue with the business approach and the marketing angles that the fair organizers implemented, the idea of stARTup is an important one worth revisiting because it shook up the fair model and opened up the potential for even more challenging future projects. That said, Parking Lot Art Fair Founder and Director Jenny Sharaf and Program Manager Emily Reynolds wasted no time (the website went up on March 9) and spent almost no money in putting together a fair that took place on May 2 for only five hours. Located in the parking lot adjacent to the artMRKT fair at Fort Mason Marina, the renegade fair was free to participants, and since it was in a public space with no formal demarcation (other than a big chalk sign drawn on the sidewalk and bright pink name labels for the exhibitors), anyone happening upon the event could also roam it for free.

Cars gingerly circled the spaces looking unsuccessfully for a place to park nearby before making their way into Fort Mason to artMRKT, which cost $26 to attend. In an interview Sharaf stated, “The timing and location of Parking Lot Art Fair was incredibly strategic. I wanted collectors and art patrons to find us on their way into artMRKT. The visitors that stumbled upon us ended up also being our marketing team." She pointed out that many satellite fairs often set up around major fairs, “so that collectors can hop around to the different openings on fancy van shuttles and check out the different scenes.” In fact, stARTup was offering such a service, since they were only about six blocks from artMRKT at the Hotel Del Sol. Sharaf views the clustering strategy as a strengthening one that also offers, “a wonderful 'listicle' opportunity for arts writers/bloggers.”

Meanwhile, Sharaf and Reynolds’ “all in” curating approach included over 100 participants who are all active players in what can be called the most vital pulse of contemporary art in San Francisco right now. The range included galleries such as Et al. in Chinatown and a pop-up curated by Colpa Press, projects by The Thing Quarterly and the Wonderment Consortium as Sunshine Alliance, to individual artists—way too many to name. The atmosphere was not only convivial, but also engaging, witty, and spontaneous. Participants employed all manners of making the unusual location site specifically relevant; from U-Hauls to boats to their own cars, blankets on lawns and tailgate pancakes. “I think it falls on the artists of the city to create engaging creative moments that bring our community together. We have to create the art scene that we want to live in. No one else will do it for us.” 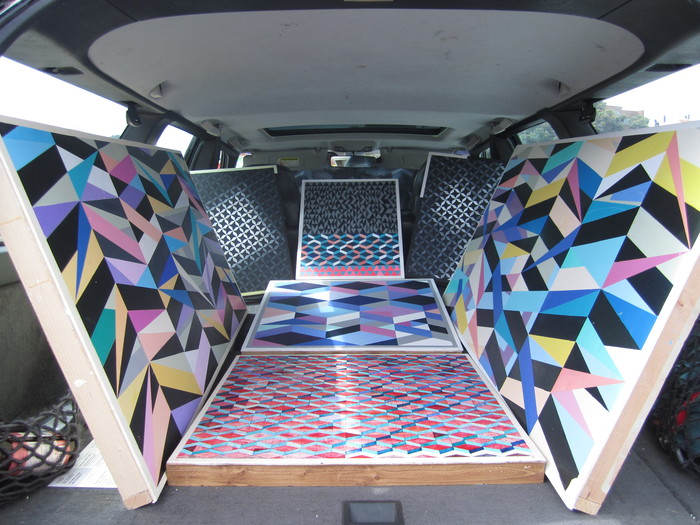 Sharaf has a point, one which was on my mind when speaking with other people about Parking Lot Art Fair. On several occasions it was mentioned that Parking Lot "allowed" artists to take risks because there was no money at stake. However, this is flimsy logic. Risk is part of seizing opportunity and requires a lot of guts. Both fairs did something disruptive for San Francisco's art fair scene with very little time to plan, and hopefully their efforts spark inspiration from others to come forward—whether it’s an additional satellite next year, or the emergence of more artist-led initiatives. The key message is to just take the risk do something different.

Trends at Sunday Art Fair: Everyday Objects
10/16/15
COMMENTS (0)
ArtSlant has shutdown. The website is currently running in a view-only mode to allow archiving of the content.