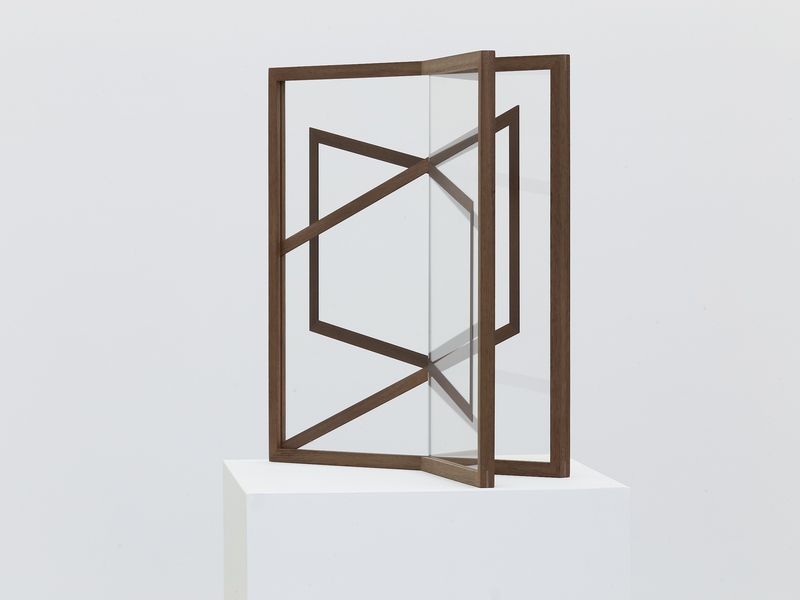 Toward Perception of Space

Arriving at the magic hour before dusk, light poured in from the skylights, casting rectangular shapes with shadow lines on the back wall of the gallery, near an assortment of three stoic yet surprisingly dynamic sculptures on pedestals. The sculpture series—titled Mutual—is an exciting new direction for Miriam Böhm, whose work has always incorporated multiple planes or three dimensional elements; until now the end result has always been a photograph. There are a total of five photo series plus the sculptures on display, the works spanning almost two years of intense investigation using basic abstract shapes to test the limits of how they are perceived in space.

The sculptures are meticulously constructed of bisected glass panels with digital photo print strips of faux woodgrain adhered in various geometric line configurations forming rectangles and rhomboids. Each panel is inset into grooves within simple wooden frames that are conjoined near the centers with miter cuts. As the viewer circles the works, they shift, creating their own shadows and ghost-like replicas that disappear when viewing them from different sides. It is as if the piece is on a sensor, opening and closing each time the viewer moves. Optical displacement occurs at each new gaze, creating a parallax-effect of skewed perspective. The glass subtly reflects parts in front of it, while other lines are seen through the glass—as if line drawings are being generated via technical trickery. Furthermore, the pieces overlap with the counterparts in the distance, creating even more new configurations at every turn. What the mind believes is in direct conflict with what the eye perceives.

Miriam Böhm, At On, 2015, series Towards Installation view. Courtesy of ratio3 and the artist

In his book The Phenomenology of Perception Maurice Merleau-Ponty explains the phenomenon of seeing and our understanding of the things before us: “to see is to enter a universe of beings which display themselves, and they could not do this if they could not be hidden behind each other or behind me.” Ponty’s point is that perspective is contingent upon the horizon, and the dimensionality of objects is created as they precede each other, or recede from one another, creating depth and space. Furthermore, once something is familiar, the conscious recognition of objects and the places they occupy in the world corroborate our understanding of where these and similar things are or perhaps should be. But looking at Böhm’s work these bets are all off the moment you realize you are being dazzled by the pure illusion of two-dimensional photography. Or in the case of the sculpture: photography as line on clear planes through which other photographic lines can be seen and where phantom lines appear in one view and suddenly disappear in the next. It is simply mind-boggling.

But that is not to say that photography is a gimmick—far from it. Photography lays bare its constant struggle with dimensionality. Logically, photographs are two dimensional, but as with Böhm’s persistent and prolific practice, her work ultimately incites questions about reality and fiction. This conundrum is particularly evident in the pieces titled Laying. Here, the subjects’ frozen states defy logic and make the age old notion of perspective so painfully obvious it’s magnetic. Staring, several humble pieces of cut white and black mat board are laid onto a greyscale woven fabric surface. Suddenly one of the boards appears to lift and turn. Blinking, it remains static, yet consciously I know that a 45 degree angle set on top of a straight angle is telling me that the board is perpendicular to the surface, not lying flat. The mind is boggled again. 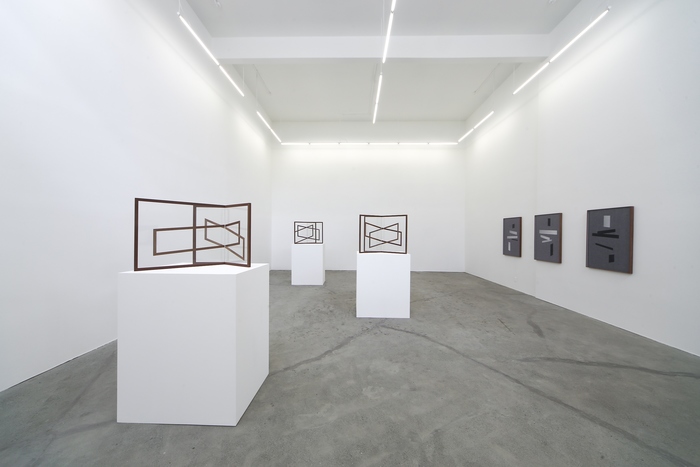 Another series titled Unit also plays with reality and fiction—if the photograph is taken as a mere representation of reality. The stand out from this series is Unit 1 (2013), with layers of subdued beige woven fabric planes. Stacked one in front of the other, their translucent texture becomes darker where they overlap. Just prior to making her sculptures, Böhm was working on the series Towards. The title alludes to a transitional phase. Departing from the usual photos mounted in frames, Böhm opted for fuse mounting the images under Plexiglass. The viewer’s figurative reflections muddle the clean lines and geometry of the crisp green and pale aqua shapes. The gallery is reflected in them too, simulating columns or doorways within the composition. Time shifts as the work becomes unintentionally site-specific, containing the architecture of the space in the moment. Most evident in all of the two-dimensional works is the condition between the present and a constructed past. The photographed constructions are castaways of a complex experiment with space. They no longer exist as objects in a three-dimensional state, but instead are ephemeral models used to create images where they are the subjects. 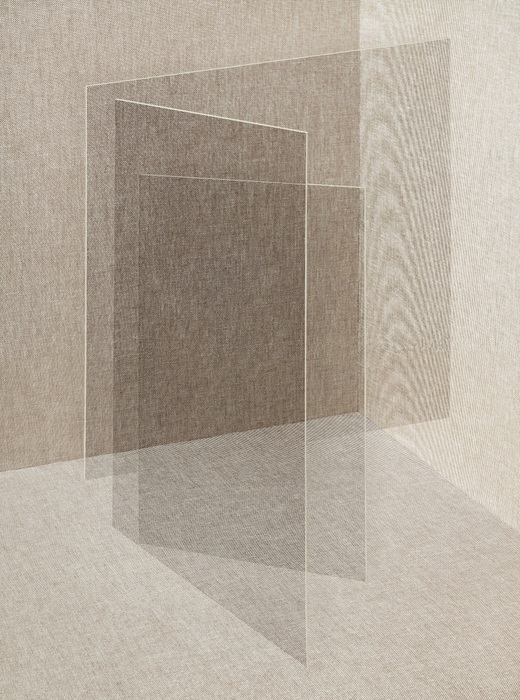 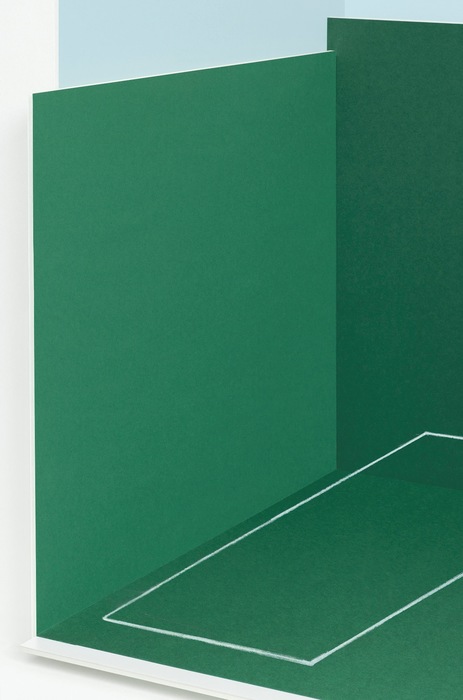 Miriam Böhm, Towards II, 2014, Chromogenic print on Plexiglass, 43 x 28". Courtesy of ratio3 and the artist

When viewing the show we are somehow with Böhm in the studio and become privy to her thoughts and activities. Her moves are in each piece. Returning to Ponty: “to be a body, is to be tied to a certain world... our body is not primarily in space: it is of it.” Böhm’s subjects in her photographs are in a sense, portraits of a process; and the new sculpture is embodied process.