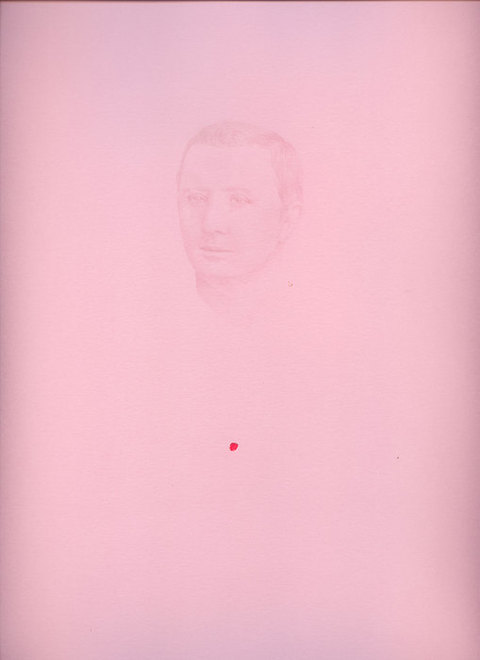 I went to Fecal Face with D.U.I. on my mind, and the criminal ante was instantly upped by the spectacle outside. (An open door and a glass wall tell all.) Of course, FF staff narrated the entire thing, starting with the Celica pulled over on Gough Street, the suspect’s mouth searched, the copious bags of drugs and cash hoisted from the vehicle, and the German shepherd invited in to play—you know how dogs love cars. Excuse me; I’m trying to focus here! Of course, I can’t fault the fascination boiling over from the tiny two-person office cube carved out in the back. This is the kind of live context you can’t pay for at fecalface.com, the larger online component of the Fecal Face brand. I came to accept that I was caught between the blat of Market Street and the reclaimed histories of artist Paul Urich. Through estate sale acquisitions, Urich has managed to wrestle three families’ photographs away from their original spheres and psychologically rebuild them in shades of pink.

The estate sale: It’s a new pollution for the first artist showcased by Fecal Face in 2000. The discernibly different angles he takes on pricking these portraits into new life are almost scientific in their minutiae. The faces themselves serve as the scientific controls, so it’s necessary that Urich have the chops to consistently render faces with photographic integrity. He does. The tools of each ravaging—gouache, pencil, Scotch tape, cutter—depend on the wall you’re facing. Across from the wall of sound (the door) is a cloud of white-framed paintings with Pepto-pink backgrounds, like a half-drained blood red. Adjacent to that, similarly small pieces hang on bone-white backgrounds. And across from this is the Bowser to the other goombas, a single large portrait that’s as inescapable as IMAX in the tiny FF gallery.

Entitled The Lights Are Back On, this large female portrait—hair cropped, all (pre-feminist) business—is effective in its menacing brow and the so creepy wandering eye, but it otherwise reveals a weakness for working at large scale. It’s utterly unlike Urich’s wall of small white works, where he massages patches of warm and cool gouache together into a palpable flesh tone. The Lights Are Back On reveals a technique unraveling as wrist motion becomes arm motion. Maybe a complete abandonment of the tried-and-true is necessary to attack the larger scale. Smartly, he donates generous blasts of hot-pink spray paint to help visually braid this piece with all the others.

The photographic portrait remains the other common denominator. Given black-and-white prints hailing from eras of lace and collegiate sweaters and long exposure times, I assume technology is at least partially responsible for the grim or blank expressions of the sitters. (Well, there is one smile.) Urich translates these images of firmly Eurocentric individuals onto the white-ground paintings in a restrained hand-coloring effort that sets the tone for crushing, sometimes suffocating, layers of pooling color. This is his latest formal conceit: the poured or slathered application of a clear, gelatin-like medium over the base painting. Crumbs of pigment are stirred in and agitated while viscous. In some pieces, this pool is visually an ushanka but psychologically a weight, though it doesn’t affect the depicted physics. Taken to the limit, the Ghost Skull paintings are at once horrific and vexing. A heavy amorphous mask drowns the portrait face except for calm eyes looming behind. The relaxation reveals a contrast to The Matrix, where panic exacerbates Neo’s extinguishing breath. These are two inert layers playing tricks.

On the same wall, among the ooze, are two Scotch tape mosaics, with transparent layers overlaid in ways tile and glass never could. Angled acutely, densely packed, and radiating from the center, they glow atop the black paper backing, especially the edges. While one suggests a manufactured oblivion (3M™) with a thick, nearly opaque central white, the other recalls a certain A Tribe Called Quest album cover, the microscopic heads exported from an adjacent church group photo. It’s these works that had me thinking Paul Urich might be a little D.U.I. himself.

More tiny heads spill onto the “pink wall,” literally on the mind of a young male portrait. I applaud Urich’s nimble gouache application here, the monochromatic touches so subtle and fused to the page they appear like ghostly photo transfers. Each pink piece carries a signature slash or cut, exposing a radiant pulse of neon green or magenta behind. Aside from these violent suggestions, each pale pink visage revels in mystery. Each portrait was received as a question, and each new one is expelled in kind.