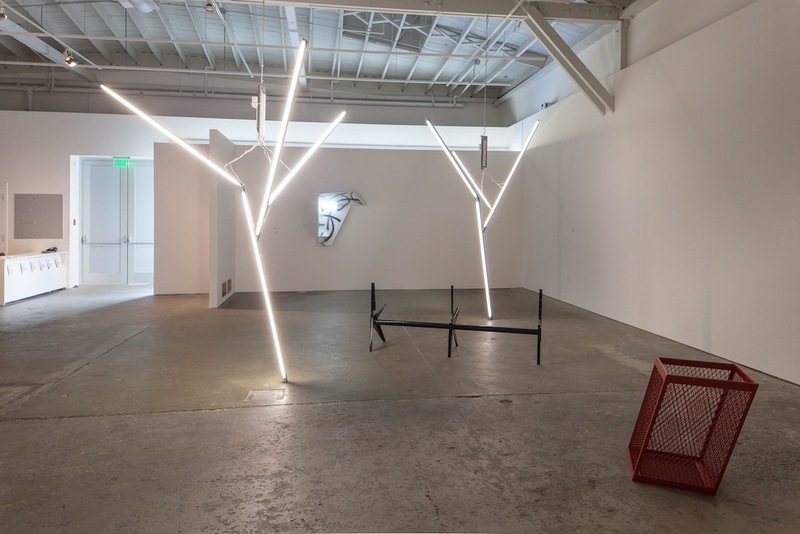 Enter City of Disappearances slowly; it will take a moment, but your eyes will begin to adjust to the dimness of your new environment and you’ll likely find yourself quizzically wandering toward Martin Boyce’s sculptures. In Our Love Is Like the Flowers, the Rain, the Sea, and the Hours, 2002, branching neons delicately tower over a bench one could not physically sit on, astride a misshapen trashcan through this park-like installation.

Or so those are the associations I immediately make.

Bordering more on abstract than absurd, this environment’s unwelcoming but lingeringly familiar. This recognition is not so much personal, as in any park I’ve visited, but more universal. Perhaps from countless scenes of couples sitting in, strolling through parks in the movies, it is a park that exists to accompany an urban environment. Here, it is a simulated experience, a deja vu, almost known yet resolutely unknown. This notion harkens the primary basis of John Menick’s video The Secret Life of Things, 2006, in which the films narrator repeatedly watches movies that involve a character waking up to discover the world they know is not as it was the day before, often devoid of any other human life. For him, once a city has no people, the movies become about material objects: buildings, detritus, what is kept and remembered, and what is lost. 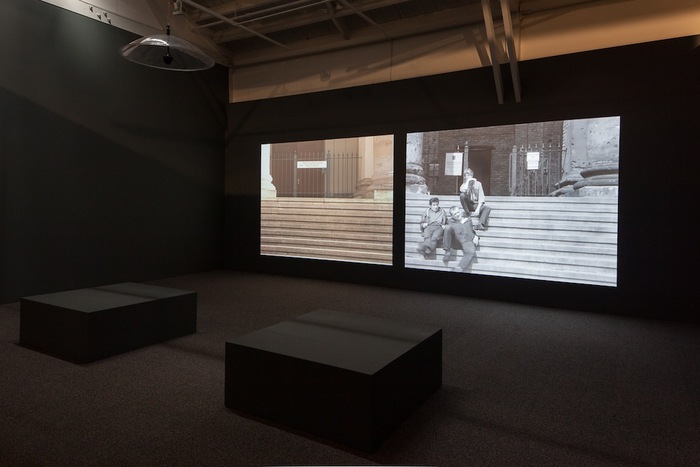 The moving image seems the most apt way to investigate the city, a way to most literally zoom out and watch ourselves interact with our environment. Often romanticized, film lets cities like New York or Los Angeles assume cultural and shared identities across time. Take then, Amie Siegel’s Berlin Remake, 2005, a double channel video projection which pairs scenes from older movies that take place in Berlin with the artist’s reproduction of each scene, using the same camera angles and shooting in the same locations, but without actors. At times the difference in landscape is drastic, and at other times barely discernible.

Like one of the films Menick’s protagonist mentions, the contrast is really evidenced in the lack of human presence on the left-hand side. There is an inherent eeriness that, viewed with pleasant musical soundtracks of the right-hand clips, almost borders nostalgia. The left seems to be almost longing for the right. Like a tableau, cities are constantly being written and created. Standing alone, they become irreverent monuments housing secrets of rupture and relevance, some of which may be able to be excavated from physical matter, many of which disappear forever. 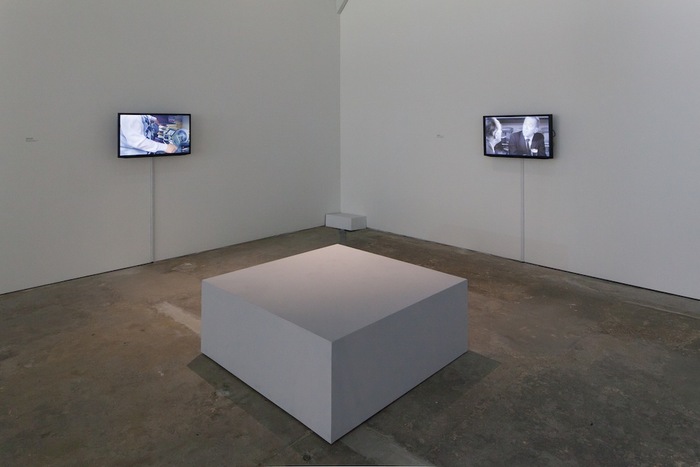 Yelena Popova’s video Unnamed, 2011, reveals the once well-kept secrets of a utopic Estonian town and her hometown in Russia, through memory and history. Though many questions still remain, she weaves a narrative of invisibility and utopia between these sister towns, each clad with idyllic neo-classical style buildings and populated with voluntarily imprisoned citizens who agreed to live in secrecy for many years to produce nuclear material for the Soviet Union in the 1940s. As Popova purports in her narration, certain things (people, cities) will only become recognizable to us, become visible, after the passing of time.

Understanding cities, or our relationship to them emotionally and physically, requires breaking things into smaller relatable parts, but how I wonder do we do that now, in the present? How do we understand the city as human while facing eviction and gentrification? City of Disappearances does not answer by saying: look to the past, it was different then. Rather, any nostalgia manifested by the exhibition speaks to fluidity and a non-linear history of the stories cities tell. As the narrator in Popova’s film declares, “nostalgia is a pillar of salt.”