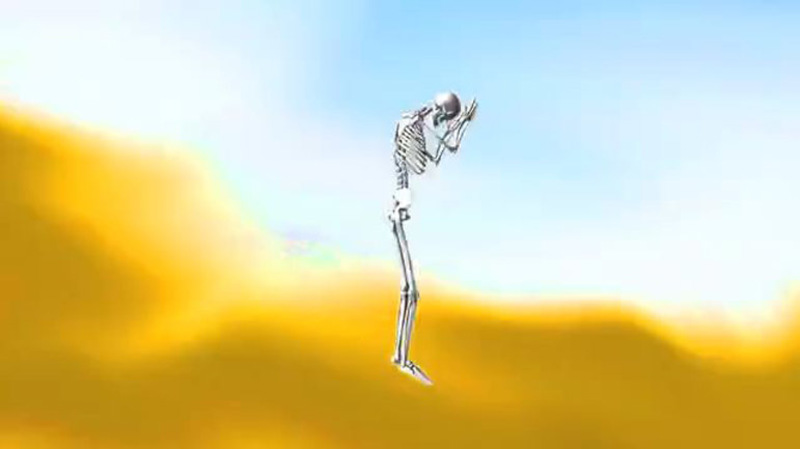 I wake up and mindlessly hold my iphone over my face and click through instagram, tumblr, facebook. I always feel so displeased. What am I searching for? Social media is now an extension of my brain – an involuntary impulse, a robotic motion. Each of us grapples with the push and pull of media in our lives: causing anxiety, soothing our worries, suspending us in space, critiquing our world, making us feel somehow productive. Artists negotiate new media landscapes with a power to conceptually imagine, unpack, project, and threaten our personal thought processes.

Welcome to And We Carry On, an exhibition of mostly digital-media based artwork by a myriad of Bay Area artists. If seen as extensions of our collective selves, reflective of contemporary consciousness, this show as a whole seems hectic, pixels and sounds competing to be considered and reveal their messages.

In what almost mirrors a Ponzi-schemer’s promotional video, Laura Hyunjhee Kim’s Extinction, 2013, plays on loop in a room full of pews. Transfixed viewers are greeted by an animated rendering of a human skeleton that acts as a jovial narrator: asking questions, making statements, doing jigs. Certain refrains repeat themselves with a trance-like rhythm. Man before time, there was extinction…Time after man, there is extinction. The words are familiar, the sentence structure is not. Visual elements of the video harken old-school internet aesthetic (low-res flashing colors and wingdings) but the message remains enchanting. These fragmented extensions of the artist’s consciousness cannot easily be put together, but searching for a narrative is often exhausting, and there is something subversive about undoing homogeneous arcs and messages. Extinction may very well be creating its own language, rendering the viewer complicit in its prophecy. 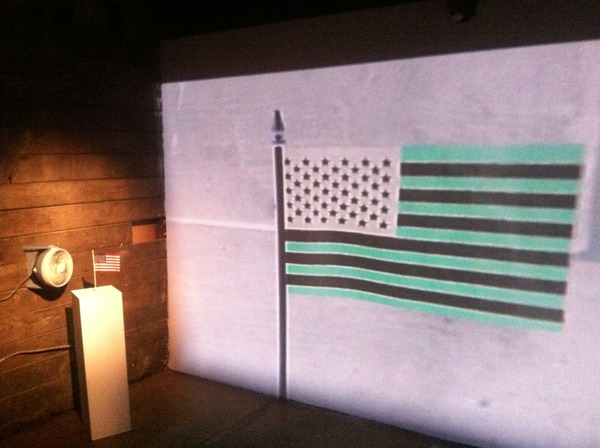 In the next room, upon pushing aside the heavy black curtain, the viewer almost feels transported, as if the rest of the gallery just disappeared. The room is cool and dark. A fan whirrs, making that perfectly soothing noise of summer nights and crickets. The steady airstream blows directly onto a miniature American flag, attached to a pedestal. The flag’s image is being transmitted in real time to projection on the adjacent wall. By the time the enlarged translation of the flag reaches the wall, the palette is mostly green and grey, the red, white, and blue no longer discernable. Playful and very meta, this installation by Tim Sullivan titled Moratorium 2, 2013, runs the risk of being too familiar with its imagery. It is a flag afterall and both Jasper Johns and David Hammons have taken their turn exploring our relationship to its representation. The brilliance, however, lies in the quiescence: the invisible moments of transfer between analog and digital and the presence of the viewer in the process—being able to easily wave a hand in front of the camera lens, or stand in front of the pedestal. Fervently waving, with or without the presence of viewers, the tiny national emblem is the performer performing in space of representation in which the viewer seems to be interrupting.

The next room contains a playstation with a car continuously doing donuts, some super short gif-like animations and Trueths, 2011, a piece by Chris Corrente. Candidly, Corrente addresses the viewer, his face close to the camera, as if a secret is about to be revealed. Can we handle the truth? Oscillating between jokes and ostensibly serious moments, accompanied even by a switch to black-and-white scheme for emphasis, Corrente both taunts the viewer and attempts to expose himself. Is it all an act? I am reminded of Dostoevsky’s question from Notes from the Underground: Is it possible to be perfectly candid with oneself and not be afraid of the whole truth? Blurring the line between performance and self must expose some truths, and maybe this is the intention here. Is anything important about the difference? 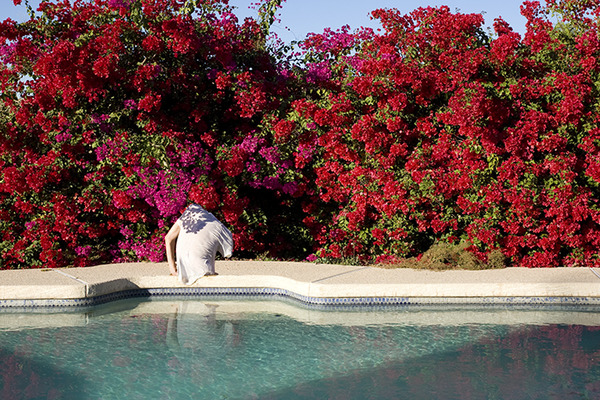 Leaving the gallery, I was caught by one last piece. A light box photo of a swathe of body just at the edge of a pool, facing away from the viewer. Perhaps the swimmer just exited the pool, but it's just a piece. Was this person ever more than a pictured piece? Could one exist as fragment? Immediately I thought of swimming (it is summer after all), but I then become absorbed by imagining this partial figure in the water. It can’t swim, I imagine, as it only has one arm. I leave conceptually intrigued and slightly disturbed and I see this as a success. Fragments and blurred lines leave room for opportunity, negating the tidy, sterile, and precise to conjure a realistic futurity.