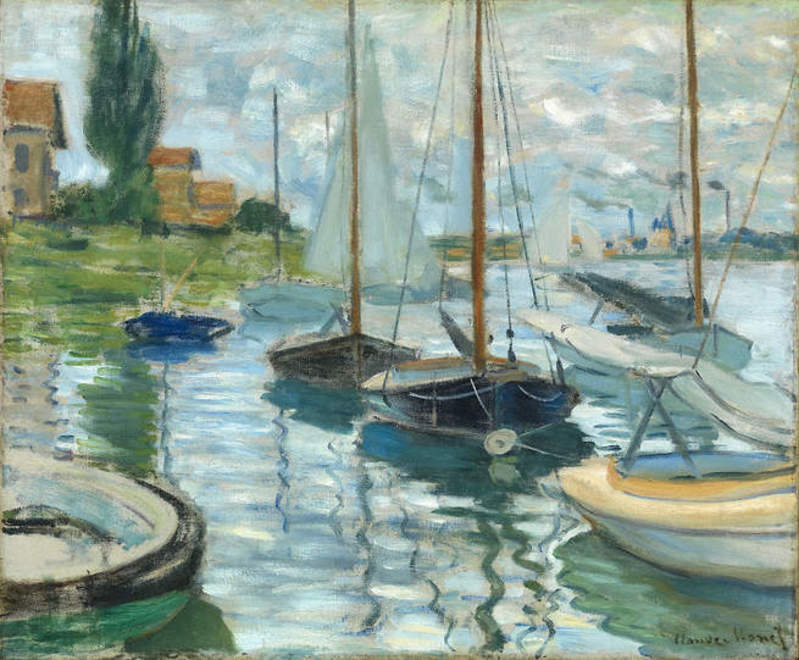 On any given Saturday, the perimeter of Oakland’s newly revived and landscaped Lake Merritt gushes leisure and its minions: weekend bohemians with shiny banjos, eager-eyed GreenPeace solicitors in stiff vests, joggers, bicyclists, casual tight-rope walkers (this is not a joke), girls selling vintage clothes out of a car, smoking barbeques, children squealing and zipping by on all manner of wheeled contraptions, couples on blankets in flagrante, and a farmer’s market covering the gamut from fair-trade coffee to handmade jewelry, fruit, vegetables, and carefully stacked pyramids of fine cheese. Picturesque little sailboats appear on the water each morning with such regularity one is apt to think they are creatures quite independent from human operation. Like everyone else, the boats just want to amble around on a nice day.

I’ve somewhat cynically nicknamed the scene Les Environs d’Oakland, after French weekend-getaway towns like Argenteuil that figure prominently in Impressionists on the Water, the newly-opened exhibition of French painting at the Legion of Honor. Naturally the scenes around Lake Merritt lack the anxious visuality of their 19th century French counterparts. We’re already used to being on display, to performing leisure in public; it’s our very lack of self-awareness in such environments that has become a social issue (I see you there, picking your nose. Cars don’t make you invisible, you know). 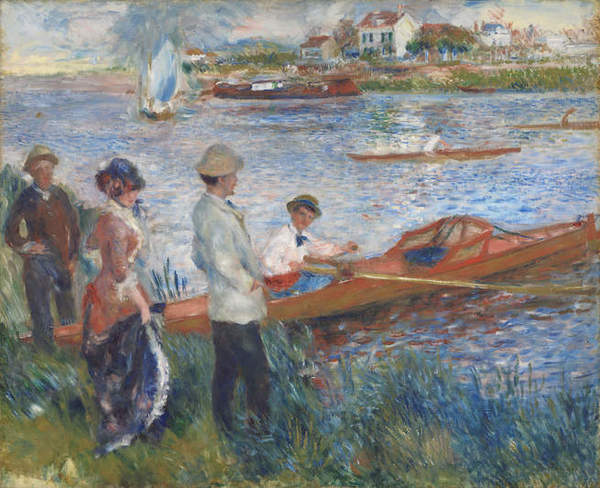 What makes Impressionist painting still exciting today is the way in which its own compromised legibility—Seurat’s dabs, Monet’s daubs, Renoir’s swift strokes—reflect or deflect ambiguous attitudes toward the strange new landscape of les environs de Paris: not quite city, not quite countryside, dotted with both factories and weekly regattas, where this strange new being called the petit bourgeois arrived via train to kind-of-sort-of get away from it all.

Unfortunately, the thesis of the show here seems entirely circumscribed by the title. Manet is absent completely, and I presume the dominance of Caillebotte is due to his double-life as a boat maker and skilled yachtsman. His Regatta at Argenteuil, 1893, is a masterful handling of the large-scale impressionist brushwork Monet fumbled with in more ambitious pictures like his 1865 Luncheon on the Grass. The globbed, waving lines of the reflection of Caillebotte’s boat on the water are more vivid and insistent than the strokes depicting the boat itself. The way the boatsman rests a single finger on the oar seemed to me a patent gesture of displayed ease. Hints at the artists’ interest in vision and the work of luxury become wonderfully apparent, but the curation of information here seeks to limit interpretation to comments on how nice it is to go out boating. 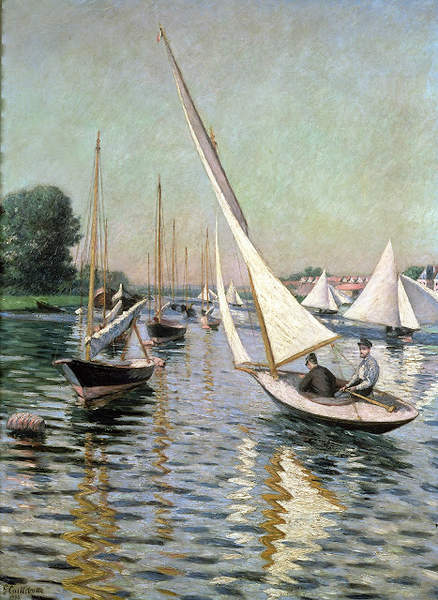 The shallow yet cohesive vision of the exhibit—all boats, all the time—is due to a number of loans from international museums, including the Musée d’Orsay, Paris and the National Gallery of Art in DC. For this reason alone Impressionists on the Water is worth visiting as much as any summer idyll, even if one has to two-step around several lifesize rowboats, oars, and other sailing apparatus to view them. One whole wall in the final gallery is taken up by a label about sailing terms. I was completely confused by this emphatic insistence on maritime pleasure until I learned that the exhibit was organized in conjunction with the America’s Cup and deliberately timed to offer “a unique complement to this summer’s races on the Bay.” If there were ever an overtly mollified presentation of modern painting, a cautionary tale on the effects of corporate exhibition sponsorship, this might be it.

Of course, museum-going is a leisure activity unto itself, and to that end the throng of visitors here this fine Saturday morning seemed satisfied. “I’m glad we came here,” I overheard one woman say to her companion “it was doable... sometimes these exhibits are just too much to take in.”