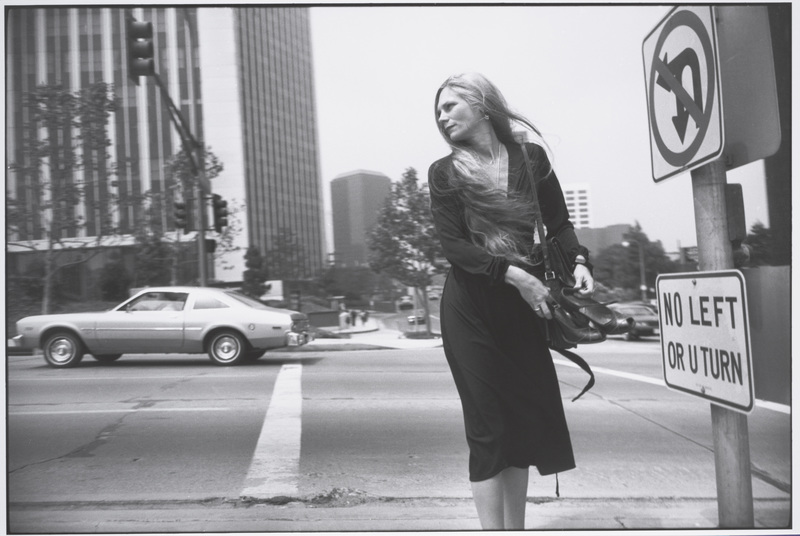 Light on a Surface

It’s hard to clear one’s head of all the preconceived notions and packaged analyses about an artist before going to meet their work for the first time. I made the mistake of reading other reviews before seeing Garry Winogrand’s photographs at SFMOMA (where I’m counting the days until it shutters for redevelopment, and I’ll be left a few old friends shy). One included a particularly barfy comparison of his New York period in the 1960s to the popular television program Mad Men. On the first pass, they do indeed seem to carry all the promise and poetry of a film still.

But everyone knows the movie itself never lives up to the still.

After a while details emerge: visible pores, awkward/dated hair and clothes, background subjects that throw off the symmetry of the composition just so. There’s an unsettling immediacy, a particularity that is honestly not so different from the feeling I had looking at my first Caravaggio, a bewilderingly lively portrait of a likely cadaver. Speaking of which, Italian old masters (or at least their techniques) surface here and there in Winogrand: a photograph from the New York World's Fair in 1964 is comically classical in its composition, and in another, seven figures seated on a bench in perfect symmetria, their alliances readable as The Last Supper. These invitations to interpretation are pure chance, and say more about us than about the photograph. Winogrand states plainly in Bill Moyers’ 1982 documentary on Creativity (viewable on a little TV inside the exhibition), “I don’t have any storytelling responsibility to what I’m photographing.” 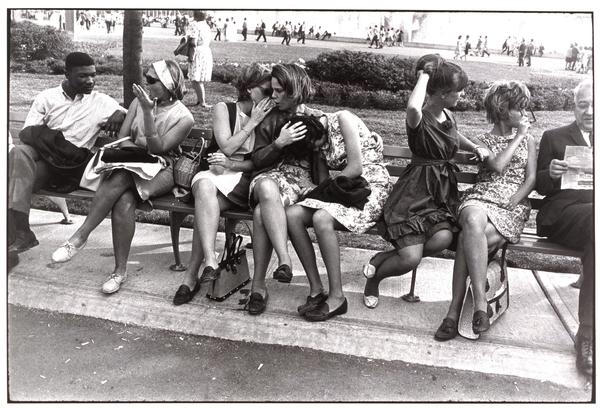 The sharp, beautiful processing—most of it done by Winogrand himself before his death in 1984, some of it in Tuscon, AZ just over the past year—coupled with the spontaneous content removes any possibility of retro nostalgia conferred by blurry family photos or orchestrated lifestyle portraits of that era, lending the images their enduring uncanniness. The snapshots are a significant plot point in a series of moments that—for future generations, anyhow—blurred the boundaries between photojournalism and fine art photography. Dorothea Lange and Walker Evans were but dutifully following Roy Stryker’s scripts for documenting the work of the Farm Security Administration during the Great Depression, and Weegee’s more sensationalist street photography of the thirties and forties were mainly in the service of newspapers.

Winogrand didn’t chase ambulances or the police-band for pictures to happen. He went out and took the world for what it was, and the results were often intended for magazine puff pieces, but I don’t think a camera has come so close to being the truth-telling tool we so hoped it would be. There are many photographs of women, some tense, some diffident, one startlingly happy, and most just plain startled. The long depth-of-field makes you feel the throng of crowded city streets; figures of all sizes, in both fore and background, appear to be all in the same plane, on the brink of collision.

It’s easy enough to guess why the later periods presented here are suggestively marked by the wall labels as a decline, possibly even a failure, on behalf of the photographer. The subjects do become subtly, progressively more aggressive and self-aware, but why is that inherently disappointing? Winogrand’s face fills the grainy little TV screen. “All a photograph does is describe light on a surface,” he says, sounding almost befuddled.

Perhaps describing light on a surface is an inherently interpretive act. To do it with words actually draws us away from light and into our selves.

Lionel Cruet Answers 5 Questions
11/6/18
COMMENTS (3)
Winogrand review by Christina Martinez
Really liked the word "barfy" in the review; shows class.
Comment by: Zea Morvitz on Tuesday 03/26/13 at 4:27 PM
Winogrand's People
This is an interesting article... I have been taking images on my mobile phone (titled mobile portraits -http://www.eileenperrier.com/page21.htm) since last year of people on the street while on my journey out and about and it is interesting seeing these images and reading your take on the work of Winogrand's People... I hope this work makes it to London some time soon!
Comment by: Perrier on Tuesday 03/26/13 at 4:11 PM
Gary Winogrand's People
As a young art director in the 60's I was lucky enough to work with Winogrand on a photo shoot at a nursing home. The photos were compassionate, disturbing, beautiful.
Comment by: Caroline Waloski on Tuesday 03/26/13 at 11:53 AM
ArtSlant has shutdown. The website is currently running in a view-only mode to allow archiving of the content.