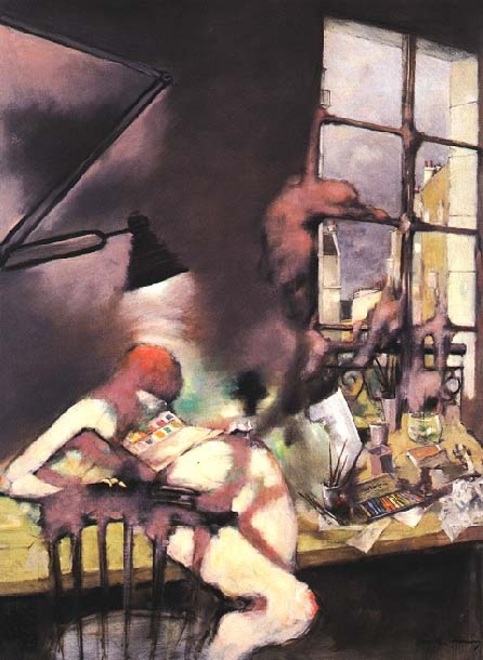 Occupying the center, bellies hold babies, beer, guts (literal and proverbial), and intestines. They are a measure of our earthly life yet seem to take on a life of their own: ballooning, billowing, expanding, bloating, giving new shape to our bodies at any given time. In the work of Dorothea Tanning, the stomach is beautiful, sexual, and enchanting.

Wandering around the exhibition of Tanning’s work at Gallery Wendi Norris, I came to a halt in front of Traffic Sign, 1970. But then, that seemed an intention implied by the title. An oddity, the flesh-colored hemisphere made of fabric stood in contrast to the loose and expressive brushstrokes on canvas surrounding the piece. A boob!, I thought (they were serving champagne). On second thought, having earlier viewed Hôtel du Pavot, Chambre 202, 1970‒73, on the other side of the gallery, the form seemed to very much resemble a presumed stomach located on one of the figures made of the exact same fabric. Perhaps this was a study, an extra belly, or just an inspired connection. Either way, the plushness of Traffic Sign, staticity and all, evokes the fecund. 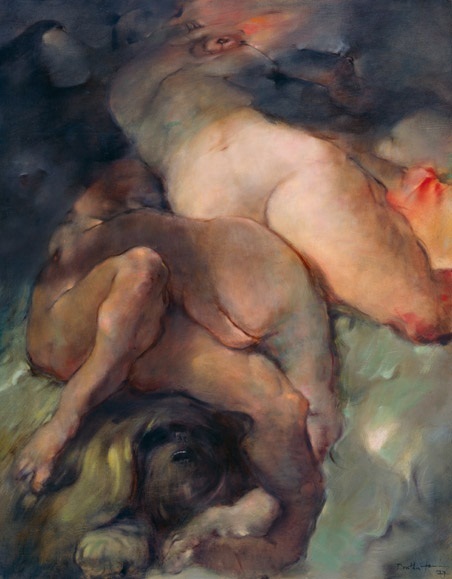 Abdomens abound in much of Tanning’s gestural figuration. Prominent examples include Portrait de famille, 1977, and L’Heure mauve, 1965. Not regarding technique, but regarding form, these human figures have a Renaissance sensibility with their fleshy, rotund mid-sections arching out toward the viewer.

In a series of sketches entitled Studies for Hôtel du Pavot, something catches my eye. It’s a drawing of a stove, likely a potbelly wood stove of yore. The part of the stove containing the fire pit is quite literally rendered to look like a rounded human belly with navel, under which the words “artists stove” are written. When someone mentions having a fire in their belly it is often akin to having a gut feeling, that undeniable impulse coming from the middle of one’s body summoning them to action. I imagine this to be part of Tanning’s artistic practice, driven to create by something intangible and deep within her while she resided in Paris at the end of Max Ernst’s life, her partner of the last thirty-four years.

Stay on the planet, if you can. It isn't
all that chilly and what's more,
grows warmer by the
minute. 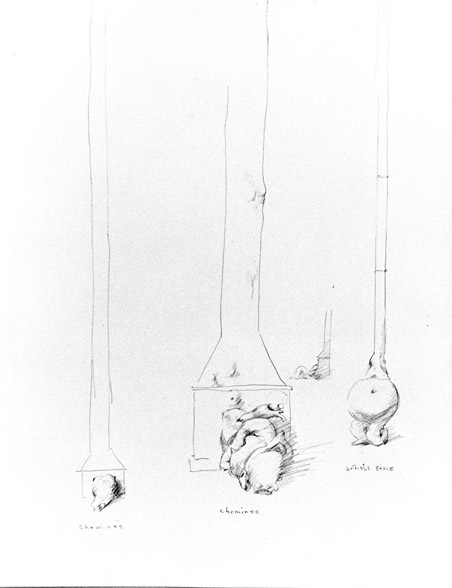 Still in the Studio, 1979, one of the last paintings she completed in Paris before returning to America, is a portrait of an artist slumped over on top of a drafting table under a window overlooking a realistic representation of a Parisian urban landscape. The face of the artist is not visible to the viewer, bent down toward a palette of paints perched on her chest. Instead, her stomach is the most pronounced bodily part. Dark, ethereal beings swirl over her protruding belly and take form as they approach the window, stretching toward the world outside the studio. Emanating from her “stove” of creation, these swirling phantoms could represent the part of her spirit she left in Paris before departing to New York. Or perhaps they were leading her away, as often the desires that emerge from deep within the center of our bodies usher fecund manifestations only when indulged.