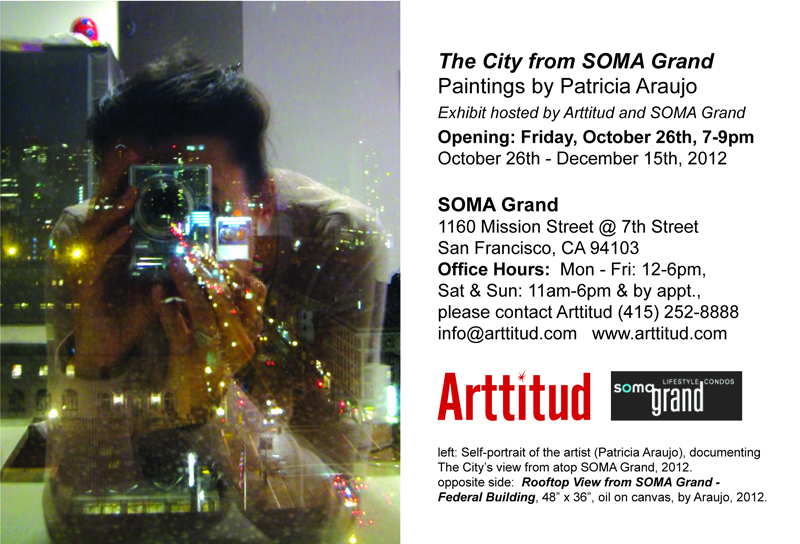 THE CITY FROM SOMA GRAND by Wilma Parker, Critic-at-Large 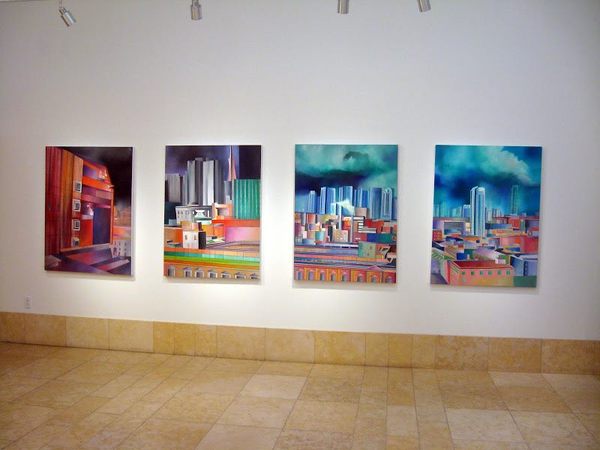 Paintings by Patricia Araujo, seen in a linear format at SOMA Grand.

“In general,  the most interesting artists work out their own salvation”, a quote from Oliver Thomas, Art teacher at Eton on the work of Alexander Thynn (Book 11, Top Hat and Tails). This artist is a friend of Patricia’s, and work is the operative word. Blithly and innocently Patricia was handed a project that would have killed the proverbial horse. There ought to be a limit by law on the number of hats and the hours of work that is routinely expected of any artist, to wit, to paint “views” from SOMA Grand, luxury SOMA condo building. Since this is San Francisco’s newest and most glamourous neighborhood in what had been the oldest, certainly  historic and  most squalid, akin to Paris’s Marais before and after restoration, the assignment, to succeed, required making visual sense out of literally thousands of shapes, a three dimensional hodgepodge of unrelated eras and styles. All done under an impossible time schedule while arranging publicity and while simultaneously writing a book on the subject.

Is there nothing this artist can’t do? With good grace, attention to everyone and every detail, Patricia takes a leaf from her mother’s book, an important flower importer, making sure you smell only the roses. This is what she does with each of the 48’x36” oils on canvas. Based on  knowledge of Art History, reminiscent of Matta and Tanguey, ability to draw, and with roots in Colombian culture Patricia weaves all elements in the four, and the four themselves together in the manner of a Mayan or Guatemalan tapestry, the middle two works sporting Giottoesque fringes of buildings on the bottom. (You think in terms of top and bottom here, not background and foreground.)  All representing in clear form and color the complexities of the urban view. After all, that is what a city is---- a beautifully complex tapestry of contradictions. And this one developed nearly without plan or zoning.

Rooftop View from SOMA GRAND: Federal Building, 48x36” oil on canvas. 2012, has the pure dramatic flat black shape so original, so unexpected, that stands for sky. This is the new Federal Building as the architect would have liked to have it seen, and also features in her new book SOMA RISING, as does each in this series, Patricia’s iconic favorites--- the original Mint, the Emporium Dome, Fox Theater, Transamerica Pyramid, PG and E Power towers, the classically purity of the Hibernia Bank, and the Marriott Hotel. 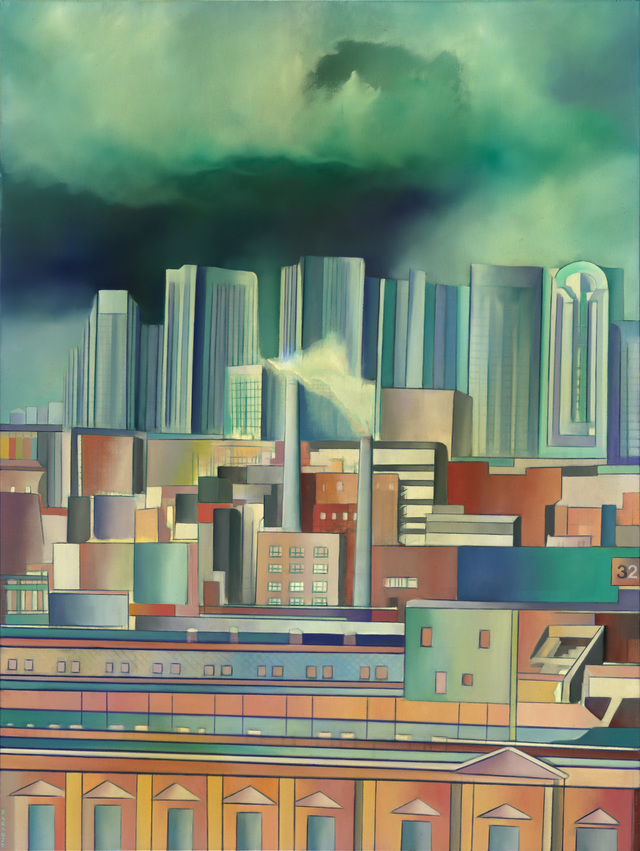 Rooftop View from SOMA Grand III is critical in that it bridges the gap between the pure geometries of the first painting and the second painting, making the unexpected transition to the English Romantic Movement sky that dominates in Rooftop View from SOMA Grand IV, a direct progression from the strictly opaque geometries of  Rooftop View from SOMA Grand: Federal Building. Also to be seen are the PG&E Egyptian style 20’s power towers. The jukebox of the new Marriott peeks into view behind the neoclassic original Federal Building. All the buildings depicted extremely tightly woven into a fabric of their own, the sky alone dominating in its own risky way, as a bow to realism.

The final painting was completed 6 days before Superstorm Sandy hit, and may hold the key to this sudden sky. A storm is brewing. The Chris Daly building, (aka One Rincon Hill), telegraphs its foggy isolation from the freeway across to the Inter-Continental Hotel. The tenuousness of both challenged and held up by that most unexpected and unexpectedly powerful force, the colorful house of card of the old low-slung and disappearing paper thin warehouses, helter-skelter but now tightly arranged on a geometric axis of the old South of Market. 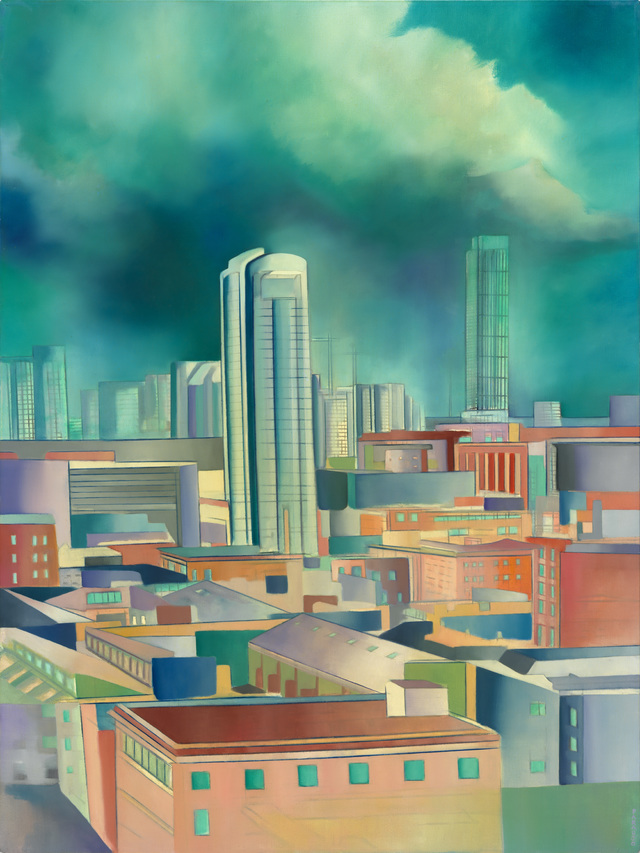 What Patricia demonstrates in the last two is her willingness to challenge the Museum line, the long accepted Modern chestnut that you proceed from Realist to Abstract, as demonstrated in Matisse’s Back series, MOMA, NY. Sooo pre-digital world! Patricia has reversed this process, taking what she needs from each to make the point. The old world, the old formulas and conventions are gone, have gone global, as in the two first paintings, Rooftop View from SOMA Grand: Federal building and Rooftop View from SOMA Grand II,  she depicts, the black abstraction of I and II exploding into the English Romantic turquoise skies of Rooftop View from SOMA Grand III and IV . My only comment may be in the interpretation of the landscape and sky in the two, against the geometric bottoms. But Patricia pulls it off.

This perhaps because, of the time constraints, causing her to run on stones, live or die. I add, she studied Architecture, is the daughter of a Disney Architect. What she has learned about space is palpable here. The overall tone is the pure color of South America breaking through the San Francisco grisaille. Araujo says, “I wanted to brighten it up, bring in more clear color.”

The interior entrance space of SOMA Grand is well served by these paintings, in that the four faithfully demonstrate the views from condo units, while adding warmth and excitement, the "made by hand” touch to what could become an overly sterile and spa -like space. These four blow out of the water the very expected Diebenkorn museum prints hanging in the permanent display space just across. Back to the Museum, Mr. D! These actual paintings are so specific to the grandeur of this lobby, they should be acquired for it. I have personally watched Patricia develop in an unbroken trajectory over a ten year period a unique view of San Francisco’s newest and most exciting neighborhood. Well done, Patricia!

If you miss this show, go to Arttitud, 111 Potrero Avenue, where she usually has something to be seen, including these 4 paintings and for now what was to have been the fifth painting in this series, the rich autumnally toned View from Sixth and Jesse Streets, 20”x24” oil on canvas, which is the cover for her new book, SOMA RISING. Arttitud is open Tues-Fri: 11am-6pm and on Sat:11am-5pm. 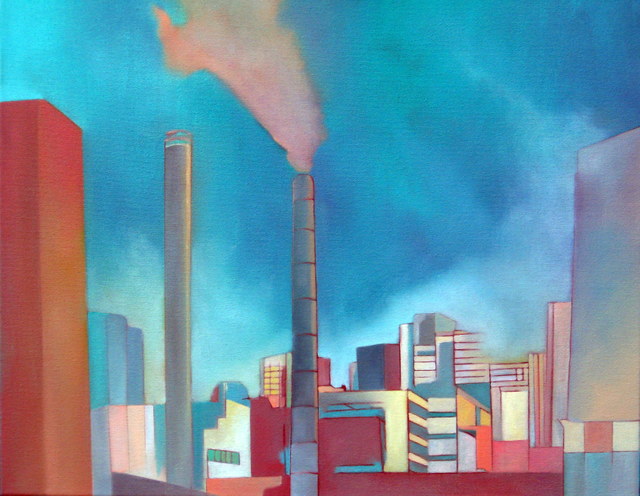