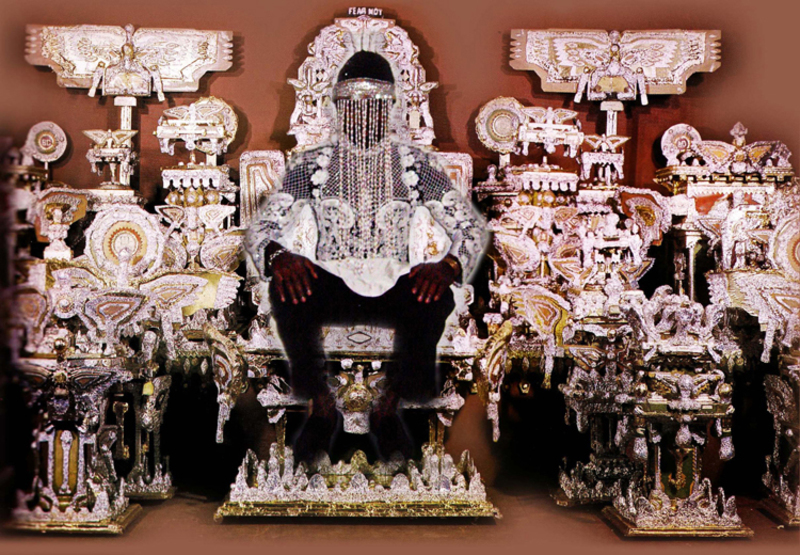 The following contains excerpts from an interview between Cora H. via Michelle Y. Hyun and Kamau Patton, on October 28, 2008 at Southern Exposure, San Francisco, originally published in the Spiritualist monthly gazette, “The Medium of Light.” Hyun, an art medium, compiled this condensed version of the original hour and a half long interview.

Cora H.:  Hello, Kamau.  My name is Cora.  I’m an American Spiritualist from the 19th century contacting you through Michelle Hyun because I’ve noticed your recent artwork could only have been produced by a spirit medium. I, myself, was once a medium and active trance lecturer.  Let’s start with the title of your show at Queen’s Nails Projects, Zebulun [on display from September 18 – October 18, 2008].  Where does it come from?  What does it intend to evoke or perhaps invoke?

CH:  So if the name for the show came from beyond, what other references [in your work] came to you in that form or method?  There are references to the Five Percent Nation, the Moorish Science Temple of America, the Bible, Yoruban mythology… have you been in contact with Wallace Fard, Elijah Muhammad, Clarence 13X, Noble Drew Ali, or even the spirit guide Orunmila?

KP: I see it as a kind of divination system.  Diviners work in many many different ways.  Some diviners cast nuts, some cowry shells, some chicken bones, which can be adequate for personal readings, but I am looking towards a larger social reading.  The elements in my system are objects and ideas that refer to the systems of people.

There are keepers of information, who tend to exist in communities as yard salers, junk shop owners, estate salers, and hold the information that holds the past.  An estate saler handles the objects of the recently deceased; those objects are infused with the spirit of last touch. I tend to be called by and develop relationships with these types of people, who are able to see the future and the past with a level of clarity because they exist at that threshold. With the Nation, it was See Allah, who is the keeper of a great deal of history about the Nation.  We spoke for a long time, and I was allowed into the offices and saw the archives.  I was allowed to be in that room and soak up those energies.  So, I wouldn’t say that it comes directly, but from medium (objects) to medium (keepers of objects) to medium (the artist).

CH:  So do you think that those same charges, or messages, or codes that are imbued in these objects can still be transferred through this thing called The Internet – through that window to you?

KP:  Yes.  If you’re able to see something, you can make a visual connection, and then in your active mind center, you’re able to conjure hybrid forms.  You have people making hybrid forms in the world, whether that’s by tattooing themselves, or wearing different clothing, or even just creating. On the most material level, you have folks that are able to reproduce across lines of culture. So human beings are actually creating hybrid objects…

CH:  So, if it’s possible to do this through the screens of these Computers and The Internet, in a way, all of you in the 21st century could be considered spirit mediums?

KP:  Exactly.  Just having the objects present in one space or in one image creates the potential for them to interact. With objects and ideas contained by time periods in each room, many museums do not allow for these objects to interact.  Whereas in my shows, I’m keeping them in all one room, and those time frames are collapsed. As computers are now acting as intercessors, folks are able to travel through time and space, transmitting images over vast distances.

CH: I want to go back to the idea of self-deification in your work or deification in general. It seems like you just anthropomorphize God, as done by Wallace Fard, Elijah Muhammad, Clarence 13X and now by you?  Explain your thinking behind producing works such as the Diviner Enthroned or 1 Kings.

KP:  If you notice in that image, the energies are entering from above down and descending into the head.  Your head is where the spirit enters, and then when the spirit enters you, you are enthroned.  This is the royal pantheon.  So I don’t believe that Muhammad Elijah and Clarence had been seated. They were the host for the spirit that descended upon them and that spirit can descend upon many many individuals. If I open my head to and am mounted by the spirit, then I embody that and personify that. I’m a vessel; the spirit needs my flesh to be able to operate. And yes, I feel like I can manage certain thresholds.  But I don’t think I’m the only one. We have hundreds of thousands of individuals who are playing a part in this grand divination. So, I would say that I am an aspect, and I try to maintain an open aspect to connection.

CH: So then who is the spirit medium in all your works, or even in general now in the 21st century?

KP:  It’s you as an individual taking or having this device.  The device has the potential to divine and to give clarity… However, it’s the individual who is able to—through logic structures and through developing relationships in a larger network—become a better diviner.

CH: How would you respond to a reading of your work as a conceptually based art that creates a new or hybridized but coherent belief system based on this pastiche of mythologies, folktales, subjective histories?  Or is that taking it too far?

KP:  I don’t think that’s taking it too far at all.

CH:  Do you think your work reaches a conclusion?

KP:  Well, no.  I don’t think the work reaches a conclusion.  I think the term here we have to focus on is autocatakinetic - the tendency toward order.  That can be an image concept, i.e. The Throne.  The throne is spinning into a complex but orderly system. It’s also a hybrid form.  I would say that it is moving towards order, which I feel like is an important thing for us to think about, in terms of thinking and looking at the universe in general.  The universe as it expands, or as our concept of it expands…

And we’re able to compute higher and higher orders of it, and the clear patterns will begin to emerge.  So this is where I’m coming from or what I’m thinking about in terms of making or having a conceptual art practice.

ArtSlant would like to thank Kamau Patton for his assistance in making this interview possible.

Posted by Michelle Y. Hyun on 11/30/08
Tags: video-art, performance
ArtSlant has shutdown. The website is currently running in a view-only mode to allow archiving of the content.