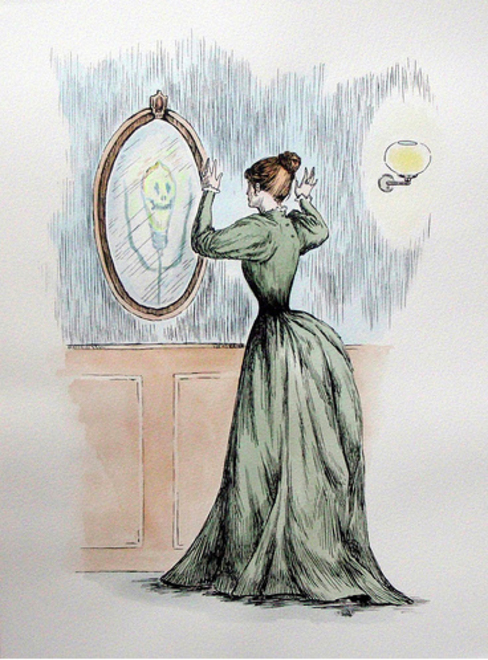 “My relationship to new media is one predicated on imperfection, specifically, the importance of imperfection in a digital culture driven by the desire for seamlessness and unquestioned functionality.”

I found myself taking in Christina Corfield’s new work for Follies of the Digital Arcade by looking from one image to the other and back again, then repeating; piecing the images together, not unlike an early George Barnard panoramic landscape, to get the full picture of the environment the artist has created on the gallery walls. Harnessing the wonders of technology, Corfield’s world seemingly takes place in the time of the penny arcade. Set up in series, the subjects of her drawings are actors in her world, experiencing real and imagined technological frustrations in their frames.

In Ills of the Ether, all works 2012, Corfield identifies some negative side effects brought by interacting with new technologies. Split into gendered categories, examples from the masculine side include “Impotence” and “Distractedness.” It is not immediately clear upon viewing what technologies have caused these symptoms, but I quickly felt trapped in the world as my phone sent me updates telling me it was my turn in multiple “Words with Friends” games which in turn made me realize I had text messages I needed to read. While there are not iPhones present in Corfield’s work, I could quickly envision myself at that moment rendered into a symptom of my own. Corfield’s Ether is no celestial paradise, rather it is an unending continuum of technological experiences, revealing the ways we may find ourselves unknowingly caught in its trajectory. 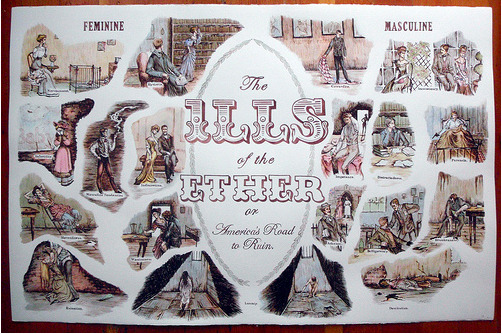 Modern Family is rendered in a similar fashion as Ills of the Ether, displaying a series of mini-scenes where technology intervenes into family life, for the worse. I found the series Eyewitness Accounts particularly charming. Especially one where a woman in Victorian garb peers into a mirror, reflecting her pose mimicked by a stick figure-like character with a light bulb for a head. Like other illustrations in the Eyewitness series, this piece speaks to the wonders of enlightenment that technological advances can bring but also evoke a horror witnessed when we self-referentially reflect on our dependencies. Corfield calls naturalness with which our human subservience to technology comes into question.

Another series of her work is particularly dedicated, not only to subjects reflected in the above mentioned work, but to California as a nexus of enviable au courant activity.  In her Light of the Word paintings, a very California-crest-looking bear is depicted with a light bulb inserted into the composition. Her video project, The Body Electric  (with accompanying poster series) speaks to this concept prominently. Or so I would say. The thing is, the video project is produced in a very old-timey-theatrical way (say, vaudeville), and I found it really hard to sit through. Somehow I found I lacked that old-timey patience for this type of entertainment. Was it that it wasn’t live in a small downtown theatre? Upon reflection, I find my reaction to be telling of a question Corfield reflects in her artist statement: “Do we engage with mobile technology with the same awe that viewers of the first film, the first lightbulb, photograph or stereoscope did?”

Though I shiver in the warmth of vinyl and the perfume of old books, unfortunately, the answer is no.

Posted by Kara Q. Smith on 2/7/12
RELATED ARTICLES
COMMENTS (0)
ArtSlant has shutdown. The website is currently running in a view-only mode to allow archiving of the content.