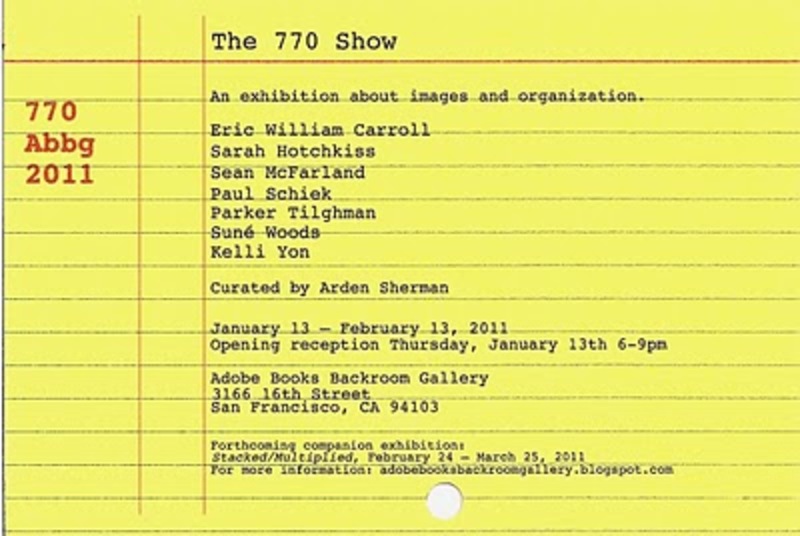 Books litter the narrow aisles, sometimes literally piling up to the ceiling in teetering towers; and genre classifications, while noted with weather-worn signage, feel at best like well-meaning suggestions, loosely given. The Adobe Books Backroom Gallery's inaugural 2011 exhibition, “The 770 Show,” addresses the site of the bookstore itself, a space as cramped and contoured as the gallery with which it shares a roof. Curated by Arden Sherman, the latter observation, underlines the rather bare-bones rubric of the exhibition.

Seven artists were invited to machete their way through the stacks, find an image in a book, and then respond to that image through photography. The hope seems that the artist through the documentary lens of camera might provide a sort of order to the disordered morass of reality, which in this case happens to be the densely packed hardcovers and paperbacks of Adobe Books. This curatorial premise could have stood well enough on its own of course, but in a delightfully unexpected meta-commentary on the whole shebang, four of the books went missing from the gallery shelves only hours before the opening reception, as if the invisible hand of the bookstore (or, you know, a customer) re-instituted a rightful chaos from the artists' attempts at ordering. Replacement books were soon found, which one supposes is a good thing for the artists whose work was affected, but the entire fiasco bequeathed an unexpected yet necessary dimension into an exhibition hitherto lacking it, the delightful fudging of an often aleatory reality.

Books go missing from libraries all the time, and although it's a little odd to see Suné Woods' cyanotype proclaiming “bold-faced lies” next to an empty shelf where its companion book/image should be, the lacuna precisely highlights the tension between order and chaos that “The 770 Show” is all about. (770, for the uninitated, is the numeral subheading that refers to photography books in the Dewey Decimal System of classification used in most libraries, but not Adobe, which can be little more poetical in its arrangements.)

Such issues addressed, the seven artists were free to interpret the curator’s methodology, and there is a correspondingly eclectic array of outcomes. I particularly enjoyed the small Kodachrome slide of the artist Sarah Hotchkiss standing next to a rocket ship paired with a book depicting the wonders of lunar travel. A singular 4.25'x3.25' photo by Sean McFarland depicts a distant, diffused light seeping through a canopy of trees, a wonderful evocation of The Redwoods, an old nature book with a similarly enigmatic cover photo. But are the images from the books now any more grounded than they were before? And how do the new images provide order, not for the artist, but for the viewer? In an exhibition predicated upon the dance between the reign of categorization and the profusion of clutter, it might be just as instructive for the viewer to check out the show and then dive head first into Adobe's labyrinthine stacks. Wonder, after all, is a child of chaos. If nothing else, “The 770 Show” suggests an untamed world, ripe for the wrangling.

Posted by Brady Welch on 1/24/11
RELATED ARTICLES
COMMENTS (0)
ArtSlant has shutdown. The website is currently running in a view-only mode to allow archiving of the content.