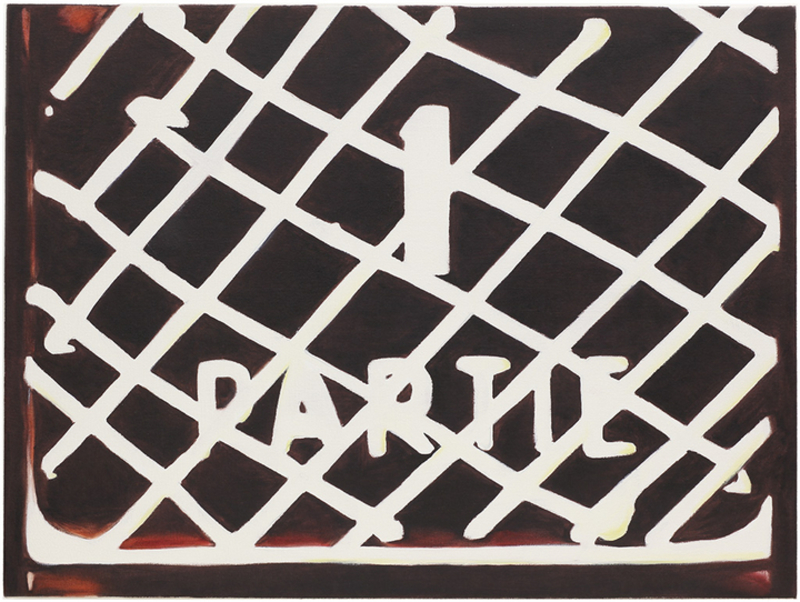 Enigmatic, if not altogether oblique. Jordan Kantor’s painterly gestures are clearly not for the faint of heart, and at times seem to require several advanced degrees to unlock their meta-critical alchemy. The San Francisco-based artist's latest exhibition at Ratio 3 presents a seemingly disparate array of paintings and painting-related objects. According to the press release, these add up to a “constellation” (in, I think, Walter Benjamin’s sense of the term), although, at first glance, a “scattering” seems to be a more apt descriptor. The exhibition includes several paintings, the most legible of which develop Kantor’s mediation on the mediated image, two slide projectors looping snaps of the artist’s studio, a series of prints based on a Kafka drawing, three “palette” paintings, and some photocopies of a painting collaged onto canvas. Combined, these works amply demonstrate Kantor’s profound knowledge of his chosen medium, and his singular use of it as a vehicle for thought, rather than as a material support for images. Very few of Kantor’s contemporaries can boast such a comprehensive and nuanced grasp of the practice, and it is with the full weight of this knowledge that he bravely undertakes the activity as both an anachronism and a readymade which is as honest an approach as one could ask for at this particular historical moment.

The show unfolds as a series of philosophical propositions that are articulated with calculated medium-specificity. For instance, the film leader paintings, which open the show, provide a series of visual puns (the first one reads “partie”) that revisit some of Kantor’s familiar preoccupations (they also reveal that he is not incapable of a chuckle, cerebral as it may be). This meta-dimension is a thinking-through painting, and perhaps also a working-through, in the couch-bound psychoanalytic sense. This idea is best expounded by the subsequent set of works (the slide projectors and the clever “palette” paintings), which complicate the issue of mediation with questions of process. These are also the moments when Kantor’s referential games move beyond the history of painting to expand its formal limits, all the while excavating the very nature of representation—it’s impressive.

In particular, the palette paintings (comprised of paint palettes used for a previous series affixed directly onto canvas) open an intriguing conversation. With their focus on making, they can’t help but evoke Warhol’s Diamond Dust acrobatic feat to say the least.& the Shadows series, as well as Richter’s grey “un-paintings” from the seventies and Abstract Paintings of the late nineties. In their own way, these works approach a zero degree of painting in order to bring the limits of the medium into the pictorial plane. Kantor’s contribution lies in that he posits this not as a singular rupture, but as one formal strategy among many. And this means that rather than melancholy exhaustion, he uncovers a rich and seemingly endless potential for reconfiguration at the seams of the medium.

Still this level of reflexivity (sometimes refracted to the point of mise-en-abyme) can’t help but induce an awareness that verges on the self-conscious. This perhaps accounts for the anxiety of making and mastery that haunts the exhibition, from the unexpectedly hung painting titled Untitled (builder), 2006, to the moving portrait of Arturo Toscanini at the moment of madness (and of course, any reference to Kafka...). Maybe this is simply a knowing wink at the hubris of his enterprise. Such rigorous aesthetic questioning makes for a compelling, if not altogether pleasant, experience. (But then again like any philosophical endeavor, this is not meant to be.) And I can't shake the lingering feeling that there are yet countless permutations left for the medium, especially if someone like Kantor is thinking this hard about it—and that is something to be grateful for. - Franklin Melendez﻿

All images courtesy the artist and Ratio 3, San Francisco.

Posted by Franklin Melendez on 5/31/10
RELATED ARTICLES
COMMENTS (0)
ArtSlant has shutdown. The website is currently running in a view-only mode to allow archiving of the content.