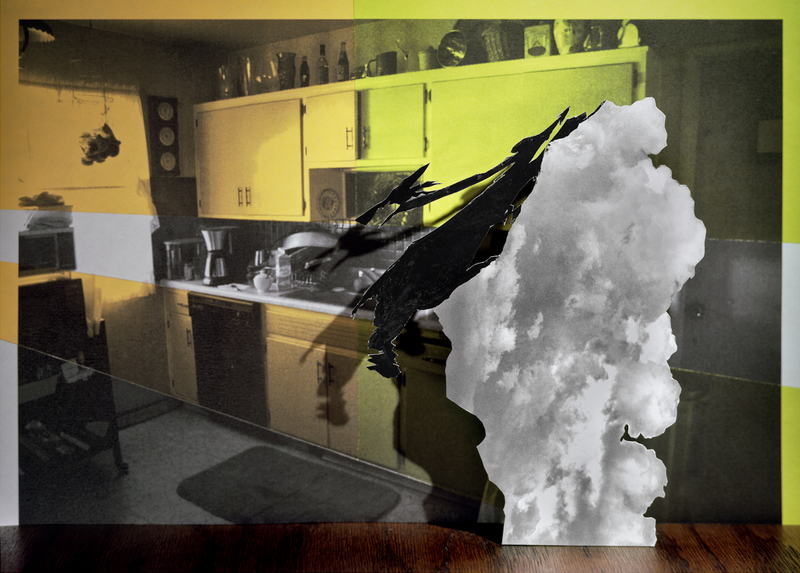 The photograph's ability to construct both personal and aesthetic histories is the chief concern of HOME, Matt Lipps' new exhibition at Silverman Gallery. Lipps deftly  explores his subject through the use of anti-Kodak moments —  snapshots of suburban interiors surrealistically spliced with the great outdoors.

The composite images function as the backdrop for amorphous shapes cut out of an old Ansel Adams wall calendar, which he then re-photographed and printed large-scale. In Untitled (garage wall), all works 2008, a particularly jagged section of cliff cuts through the bric-a-brac stored in the garage.  In Untitled (stove), a swathe of lake invades the kitchen.

Lipps created the series using a painstaking process of layering. The photographs are set against the interior of his own childhood northern California home,where  his mother still lives. He photographed most of the rooms in the house — the kitchen, the hallways, the laundry room and the garage, as well as many of its corners and ceilings. The photographs were then re-printed several times on both black and white and colored paper, and the resulting prints have been cut into sections and taped back together to form a collage that looks like the original, yet appears to be made of transparent fields of color that break up the interiors and delineate certain architectural elements of the room. In each photo, Lipps has deliberately incorporated the artifice — the wooden floor and wall that the collage-construction rested on when he shot the final image.

It’s a project that can be read on many levels. For one, Lipps is having an internal conversation about the history of the photographic image. The work strongly recalls the pre-digital photomontage of artists like Barbara Kruger, Sherrie Levine, Martha Rosler, Sarah Charlesworth and others, who incorporated analog forms of photo-manipulation to explore photography’s relationship to culture. Like these earlier artists, Lipps is engaged with the photo as a “problem” as well as “medium” and the montage allows him to juxtapose contrasting references in order to highlight, rather than obfuscate the hidden messages embedded in the images. The most obvious juxtaposition at work is the clashing of majestic open space and the closed off domestic interior.  In the photographs, the two referential images are revealed to be complicated constructions, both literally and figuratively.

Lipps treatment of the Adams photographs shows a personal evolution in his thinking about the form as well.  According to his gallerist, it was Adams that introduced Lipps to the possibilities of the photographic image, and that he initially felt that to be a photographer was to also take pictures of majestic landscapes.

By repurposing the Adams images, Lipps both removes their seductive power and remystifies them at the same time. The new shapes take on an almost anthropomorphic quality in the context of the domestic spaces they inhabit. They function like intruders — the ever-present monster in the closet from childhood. Untitled (doorway), the most poignant of series, is also the most illustrative of this effect. It depicts a view of the hallway leading into the bedroom of Lipps' mother, the only room in the house he chose not to shoot for the series. On the wall on the left are family photos that stretch down the corridor, demarcated in a yellow plane of color. In the center of the image, obscuring the actual doorway into the room, are two shapes in an interlocking embrace. While cut from theAnsel Adams' source material, they are so far removed that the natural terrain functions primarily as texture.  These are now the house’s ghostly inhabitants, having replaced the children in the photos who have long since moved away.

Doorway is extremely nostalgic in a visceral sense, as is the entire series. Yet, the feeling one gets when looking at the work isn’t exactly a yearning for the past, but rather a melancholy awareness of the passage of time. It’s an uneasy feeling, the opposite of being homesick, like going home for a visit and realizing it’s not exactly home anymore.

Posted by Julia E. Hamilton on 5/25/10
RELATED ARTICLES
COMMENTS (0)
ArtSlant has shutdown. The website is currently running in a view-only mode to allow archiving of the content.