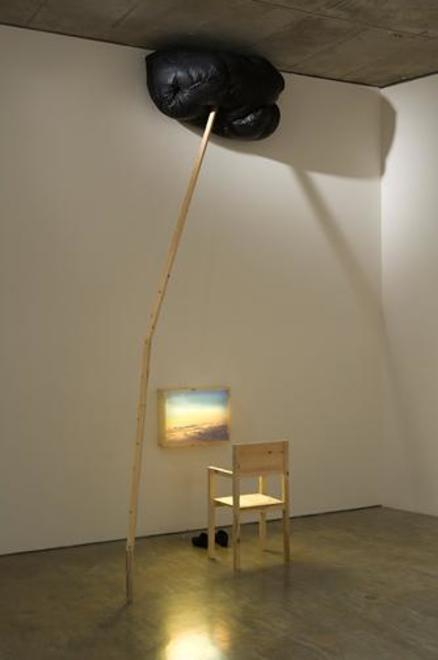 Ginger Wolfe-Suarez: Theory of a Family

“With these words I am going to take all the darkness away from you and store it in this hole within my body just below my heart. Don’t worry — it is not a big gaping wound- it is a slow seeping one — just small enough to cover with a sweater”[1]

The gallery seemed sparse, as if it had been emptied out. Yet Ginger Wolfe-Suarez’s exhibition that demands time, and the more I gave it, the more the work began to fill up and out the space, and what at first seemed like an excess (of breathing room, of emptiness) became pressing, necessary.

Like one installation fit together from of a series of interlocking components, the components work together to create a larger abstract narrative. In the front of the gallery, two low wooden benches nestle into the two alcoves on either side of the door (titled Separate/ Rigid, all works 2010). Both benches have a slightly raised “arm” at one end, and a soft pink orange light that seeps out from the edge, along the sides. Above each bench hangs a menacing black wooden cube (no such cubes without echoes of Judd) that protrudes from the storage space and runs along the ceiling of galleries the front entrance.

On the wall in the back of the gallery hangs...build your own mountain…, a light-box with an image of the close up of the side of a mountain, turned upside down. The work is accompanied by an audio component delivered via headphones - a text composed by Wolfe-Suarez, read by the artist and various others of the Wolfe-Suarez clan.

The most assertive sculpture in the show is a bent wooden beam (the side facing toward the gallery coated in glitter) precariously leaning against the wall and supported by a rock positioned in the center of the gallery. Hyperaware of my movements around the beam, It felt it like a physical being, a living creature seethed in the room with me.

I, also, was terrified of accidentally knocking it over.

Sundry other objects in exhibition include a pair of concrete running shoes, a cut mirror that leans against the back left corner of the room, and Sister/Sister, a photograph of the artists sister with her back turned away from the camera and towards an open field. The photo is mirrored on two handmade light-boxes that have been installed two feet from the ground directly across from each other.

Both literal repetition and implicit duality repeat and repeat throughout the show. What these reiterated objects represent is unclear. It could be two people, or the split personality of one person, or two members of the same family who are different yet share so many defining characteristics, and so on. We decide for ourselves. The effect of dual-ness also came from the play between opposites.  Running shoes made out of concrete, an inverted mountain, impossible to climb, and the conundrum of the wooden benches — the one comfy space in the gallery — also being the most dangerous, what with the black cubes protruding from the crawl space threatening to fall.

It is clear that Wolfe-Suarez studied her art history textbook, dogearing the sections marked sculpture, minimalism and early conceptualism, and another of those interlocking components involves an internal conversation about the nature of the form.

For one, she uses the language of minimalism in the same way that Eva Hesse, an artist she admires according to the press release, had used it. In Separate/ Rigid for instance, Wolfe-Suarez relies on the language of the cube, but subverts it with anthropomorphic associations, the body breaking the hard lines. Artist Doris Salcedo came to mind as well, her unsettling and pared down sculptural forms carry the burden of very specific political and historical events.

Yet the burden Wolfe-Suarez appears to be referring to is something much more personal   and without the benefit of her own biography, the forms feel distant, ambiguous, and abstract. For the unversed viewer, this simply means that they turn into much more general mnemonic devices, the fragments of half memories triggering deeper associations to complete the scene. Looking at the objects, reflecting on the show title, recollecting my own family, I felt sad. I turned Theory of a Family into something theatrical, a domestic tragedy. The slow seeping wound described in the text to …build your own mountain… lingered long after I left the gallery.

But it also left me wanting to see more. To see other sides of the story.  The forthcoming portrait of joy.

[1] A portion of the transcription of the audio component from the installation “build your own mountain” courtesy of Ginger Wolf-Suarez and the Silverman Gallery, 2010.