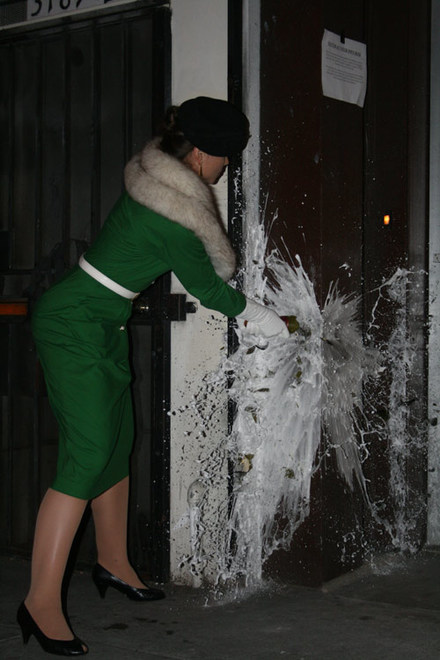 “I’LL FIND IT IF YOU STOP TALKING”

I didn’t see Exercises in Seeing, partially because I wasn’t there. In most cases, not having seen an exhibition should make writing its review rather difficult, if not utterly pointless (see: re+view). While what follows can only be a speculative reconstruction, perhaps conjecture is the only appropriate tool for reviewing an exhibition of contemporary art held completely in the dark. After all, no one saw the show.

More than thirty primarily visual projects were shipped to San Francisco from all over the world, or commissioned, performed, recreated, and then meticulously installed at Queen’s Nails Projects. There, with the lights off, they were presented for only nine hours. If this sounds like an absurd production, it’s a rather productive absurdity. At the very least, a show that can’t be seen with the usual perceptual tools puts the efficacy of those tools into question.

Exercises in Seeing seems to operate within a larger strain of cultural production that includes recent exhibitions such as Anthony Huberman’s For the Blind Man in the Dark Room Looking for the Black Cat That Isn't There, the de Appel Curatorial Programme’s Master Humphrey’s Clock,  Raimundas Malasauskas’ Paper Exhibition, as well as the pages of Dot Dot Dot, the spectral oracle at Fruit & Flower Deli, and innumerable other liminal channels, hybrids and fringe outlets. That is to say, there is a propensity for promoting speculation, non-knowledge, doubling, crypto-museology, pranks, lies, alternative temporalities, inversions, absence, invisibility and rendering the unknown less known that is at play here.

An ongoing series, this was the third version of Exercises in Seeing, which originated in 2008 at Tulips & Roses in Vilnius, Lithuania. It then traveled to The Royal Standard in Liverpool, UK, where it arrived differently. And it resurfaced anew courtesy of Post Brothers.

Exercises in Seeing owes something to David Hammons’ Concerto in Black and Blue, 2002—20,000 square feet of darkened empty gallery space to be explored with tiny blue flashlights. However, the artists contributing to Exercises in Seeing seemed to relish in displaying their work for no one to see. I do worry, however, that it invites us to employ our non-visual senses for retinal purposes. To train our ears, nerves and noses to act like eyes could be read as a reductive adherence to visual primacy within the visual arts—even as the show attempts to dim the heliocentricity underlying visual art.

Ultimately, I think it is not so much an exercise in developing synaesthetic perception exactly, but instead a mangled, kaleidoscopic sense of sensuality, though rather monochromatic and dark. Exercises in Seeing was timely, considering the vampire craze sweeping popular culture. Perhaps the ideal audience for Exercises in Seeing is not vampires though, nor the blind, but some sort of impossible leper mutants able to interchange noses for eyes, ears for feet, or fingers for sensory whiskers, at will.

While writing this review at an airport, I happened to overhear a blind woman tell a man trying to help her find a seat at the gate, “I’ll find it if you stop talking.” Without saying so, she said that she hears as well as he sees. Still their tools are not interchangeable; neither can fully understand the other’s “image” of the chair in question. Both are as abstracted, as sound and sight are never equal, but always equivocal.

It should come as no surprise that blindness was a major influence for many of the participating artists. Olivier Babin framed a found sheet of Braille, rendering the text unintelligible behind glass. Darius Mikšys invited a blind art collector to tour the show, who apparently (exists and) purchased a sound installation by Mandla Reuter—the THX sonic logo played intermittently on a loop through a surround sound speaker setup. Torreya Cummings provided a suite of eyeglasses with blacked-out lenses in order to make the space just a bit darker. She also organized a game of blind Marco Polo in the space.

Perhaps diminishing Post Brothers’ role as curator/organizer, Exercises in Lying by Etienne Chambaud consisted of the artist simply claiming all of Post Brothers’ activity as a work. Other artists admirably inverted Post Brothers’ assignment by making works that were visible in the dark. David Stein’s wall text read “THE VISIBLE SPECTRUM” in glow-in-the-dark ink on the wall. Rosie Farrell contributed tiny blue lights that seemed to depict a specific constellation. Dina Danish, whose video (barely) emitted light, displayed her face through a hole drilled into the wall. With each breath she inhaled light and exhaled darkness. The amount of light in her video fluctuated accordingly.

Light or no light, any illumination was so minimal that several of the event’s attendees recalled Daniel Oates Kuhn’s sculpture being knocked over repeatedly throughout the night. These clumsy enthusiasts were thankful for Tegan Moore’s padded corner protectors. Maybe a show in the dark is the only time Deric Carner’s secret drawings (never to be seen by anyone other than their respective owners, who must then ensure the drawing’s perpetual invisibility) can be freely displayed.

No one I spoke to was sure who won the game of chess played on Snowden Snowden’s Bauhaus chess set, through apparently surrogate objects supplanted certain chess pieces. There was also a table topped with a Foley still life, constructed out of several noise-making items, by Freek Wambacq. When activated, the work sonically illustrated a sentence, but there are too many versions to recount here.

By necessity, Post Brothers eschewed the standard installation shot, but what remains offers only the most fragmentary view. Perhaps a black photograph would suffice, as there were so many black monochromatic works—including Daniel Turner’s folds of iridescent vinyl encased tar stretched over wood frames and an arc of black balloons by Raymond Boisjoly & Ryan Peter. Jen Weih contributed a pictureless video with nearly unintelligible audible narration.

Beyond the press release, there are three documents (though this might constitute a fourth) through which we may re-imagine what we necessarily missed. The first is an audio guide by David Buuck, though there are two versions—one read by Buuck and a silkier version read by Cassandra Smith. In somber, monotone voices, they describe themselves as insomniacs who spend their “noctambulatory wanderings” in hypnogogic darkness. I imagine what Buuck described as “second sight” to be some form of echolocation not necessarily tethered to sound. And he employs his “second sight” to form an abstracted, quasi-didactic tour of the works. Yet Buuck never saw them.

The second document is a long-exposure photograph by Joshua Martinez, taken over the course of the entire show. No one has yet seen the image, including Martinez. In a third photograph, however, Lauren Marsden, dressed up like some sort of Broadway Jackie O., christens the gallery by smashing a bottle of champagne on its steel storefront gate. Supposedly, at the exact moment Marsden’s bottle cracked, the gallery lights went out and the doors opened to the public.

Yet, as Raymond Boisjoly & Ryan Peter’s vinyl text written by a prescient eight-year-old (and often by other lazy journalists) may or may not have read, “I guess We’ll never know.”

Posted by Chris Fitzpatrick on 12/28/09
RELATED ARTICLES
COMMENTS (0)
ArtSlant has shutdown. The website is currently running in a view-only mode to allow archiving of the content.