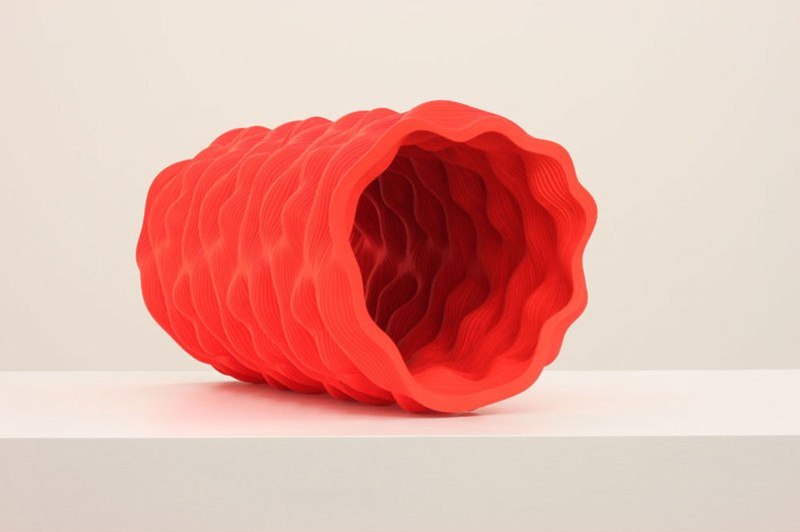 Ara Peterson’s new show at Ratio 3 initially strikes the viewer as a somewhat cryptic dialogue between two distinct, but subtly imbricated bodies of work. The first continues Peterson’s meditation on geometric abstraction, developing the technocratic bent that has characterized his signature hybridization of Op Art, Neo-geo and ’60s psychedelia. Certainly visually arresting, his wall reliefs and sculptural volumes are also very much about process. Each incredibly labor intensive work is produced by feeding complex wave formations into a computer that laser-cuts individual slats, which are then assembled to produce dazzling surface effects.

There is an inherent tension between the overwhelming opticality of each piece: (the impact can be quite disorienting, if not verging on vertigo) and its unavoidable physicality. Each slat is hand-painted and despite the Day-glo color palette, slight variations in application open up subtle fluctuations. Long Impervious Vibes (2009), a rectangular assemblage of vertical slats, extends seemingly ad infinitum, floating almost weightlessly before the viewer. Closer inspection, however, dispels this temporary illusion as minute differences become perceivable, culminating in an awareness of the extensive supporting armature of raw, naked wood. Peterson’s playful undermining of a seemingly immaterial visual field can’t help but resonate with post-minimalism and its pitting of the regularity of form against the stubborn inconsistencies of process. But he brings this dialogue into a contemporary context, situating it squarely within the digital age, where it’s the hand against the pixel, rather than the hand against the grid, (or something like that…)

The second body of work eschews these art historical concerns to focus instead on more immediate history. It consists of a series of backgammon boards (which you can play on if you want) that the artist has been producing in collaboration with his father, Jack Peterson, over the last three years. The playing field on each board has been blown out with Peterson’s signature abstraction, but rather than wave equations and algorithms, each pattern is derived from a highly personal source: geometric family kilims, ceramics painted by his great grandfather, and even meticulous piles of firewood memorably stacked by his father. The game backgammon itself carries emotional weight, as it was taught to him by his father at an early age. Collectively, these pieces encroach onto Tom Burr territory, evoking the traces of affect through impersonal structures; the patterns on each board seem to be less about formal experimentation than simply archiving fragments of memory.

And this is where things get really interesting. For this added dimension opens the show to a subtle and poignant meditation on lineage, both personal and aesthetic, as it unfolds through form and modes of seeing. And rather than succumb to the expected Oedipal anxiousness, Peterson embraces this inheritance as a type of game, a process of constant and open reconfiguration. Suddenly, all sorts of ancestors pop up, including J.M.W. Turner whose experiments with color, perception and a retinal afterimage emerge in a piece like Golden Tube, a circular construction which seems to revisit 1843’s Morning after the Deluge. The effect is a funny type of historical vertigo, which unearths the unexpected convergences of genealogies as they flutter in and out of perception.

Posted by Franklin Melendez on 11/10/09
RELATED ARTICLES
COMMENTS (0)
ArtSlant has shutdown. The website is currently running in a view-only mode to allow archiving of the content.