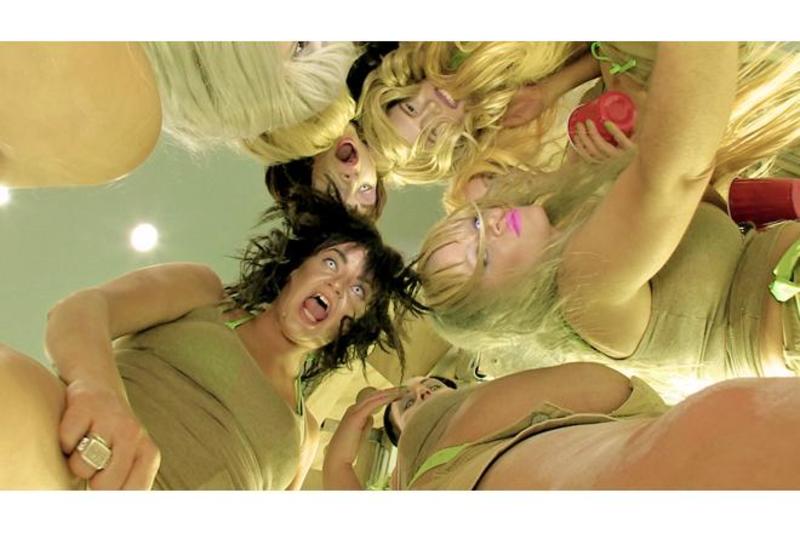 In his essay “Why I Hate Post-Internet Art” Brian Droitcour complains that “the post-internet art object looks good online in the way that laundry detergent looks good in a commercial.” He bemoans the art object that looks like it has leapt off the screen into the gallery to pose for its photo before being disseminated online. His criticism is that such objects are too aware of the gallery system, playing to the capitalist brand mentality of the art world—the image/object as a linkable, thumbs up-able thing. His recent extension of this, an Art in America article titled “The Perils of Post-Internet Art” arrived in my periphery, in the way that things do on the web, at the same time as a slew of other texts and videos proposing different positions on what it might be to be “post-internet” or “post-digital.” Using artworks on view in London at the moment I tried to figure out what could be going on. 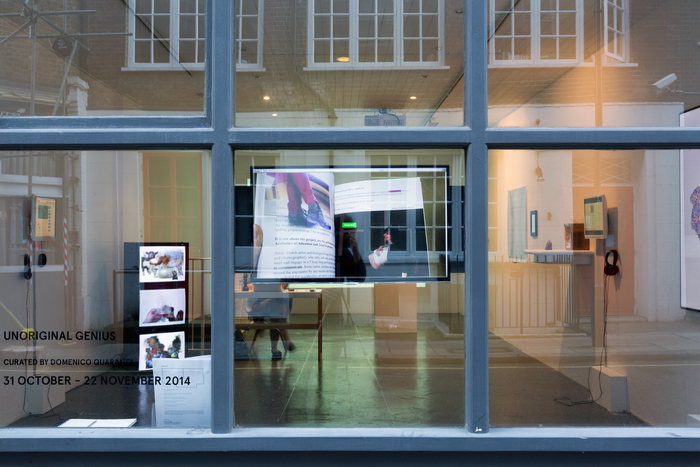 In an article in Afterall called “Identity in Art after the Internet” Melissa Gronlund suggests the “post-internet” work addressing identity can be distinguished from the 70s video monologues in its move towards the dialogic, for instance in seeking constant validation via confessional front-to-camera web-cam style, acknowledging a “public horizon within identity.” Cinzia Cremona’s exhibition Intimations Project at Arbyte in Hackney Wick opens this week. Her “videoperformances” use the new internet-popularized relationship with the screen to interrogate shared private moments. Cremona’s work deals with precisely the idea of reflective identity, implicating the viewer in her constant questions and pulling subjectivity into question. 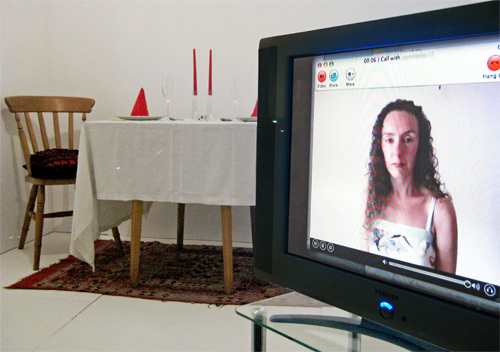 Cinzia Cremona, still from Wish You Were Here

Ryan Trecartin’s and Lizzie Fitch’s show at Zabludowicz Collection is a full audio, all senses engaged assault from these reflectively generated identities pushed as far as they can go. The videos are all presented in viewing spaces with headphones, united by loud music and lurid green walls. Trecartin’s characters extrovertly perform and form themselves in their language. Everything is always inflected, half asking and yet not waiting for a response. Gronlund’s article identified Trecartin’s work as typifying a social dimension of “post-internet.” The characters dress alike, speak alike, ape each other’s behavior and language. Language is reduced to bite-sized reinterpretable chunks, style is compressed to a single image, which are then amplified and disseminated through repetition.

The premise for Trecartin’s and Fitch’s films is an audition for a game—a device to deal with the desire to be so not real that you’re animated, literally. Music syncs with the words every now and then, diverting the action and digital animation kicks in. For viewers who are made to feel more like a participant via the immersive set, it’s like an invitation to participate in a John Waters film, a sense that something pleasantly terrible is happening and you’re already halfway down a slippery slope. “We don’t have a safe word in this safe space,” says one of the characters. More so than identity works from the 70s onward, works dealing with the identities the internet fosters have become more complex, expressing the trickiness of the line between artificial and not. Like a safe place with no safe word, there’s no out or withdrawal from an online identity. It lives on in the digital archive. You can only make more. 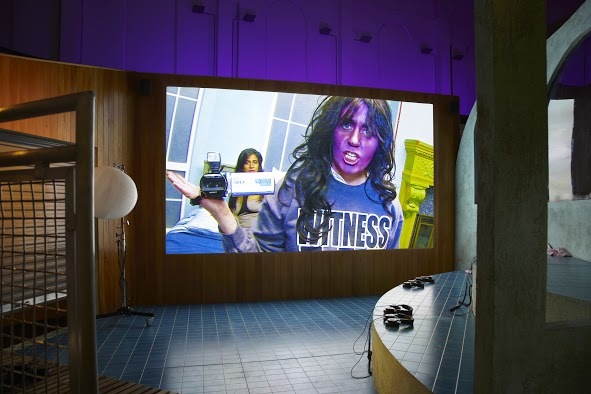 Around the same time as the aforementioned articles appeared, the exhibition Unoriginal Genius at Carroll/Fletcher Project Space, curated by Domenico Quaranta, was announced. The title takes its name from Uncreative Writing, a book by the conceptual poet and UbuWeb founder, Kenneth Goldsmith, who is currently teaching the first university class on wasting time on the internet (Goldsmith quotes Marjorie Perloff is his own title). Wishing to update the term “genius,” Quaranta argues that these days understanding and control of information is more important than creative originality. A genius is now a remixer, editing and selecting images, data, sound, text, and refusing to conform to the rules of gallery engagement. Works like Jonas Lund’s Return of Investment (2014), which lives online as an advertising space that can be bought, confront art as an inconsumable product that sells itself. Downstairs the appropriation is made more acute: Emilie Brout & Maxime Marion’s video Clichés (2014) uses algorithmically-mined stock footage for images that sync with the content of the "Fuck You Monologue" delivered by Ed Norton in 25th Hour. The simple displacement of images to the audio is like a refreshing slap of virtual irony—both very and not-at-all original. 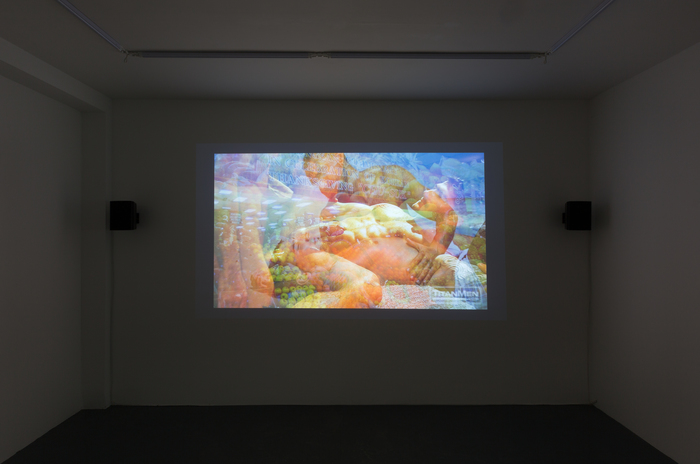 Droitcour’s conception of post-internet isn’t wide enough to include the complex identity work of Cremona or Trecartin or this shift towards remixed content that plays in and on the internet. It focuses on objects as images, and the gallery as a detatched mode of viewing art. And yet for the Trecartin/Fitch collaboration, the object-sets in which the work is filmed and presented are weird hybrid objects in the gallery, half about shaping a video viewing experience and half about sculpting a full bodily experience. They transgress the “post-internet” label.

Korakrit Arunanondchai’s show at Carlos Ishikawa exemplified all of these traits: a reflectively developed identity, mass art idea appropriation, and a disregard for typical gallery viewing. He adds to this mix the brand ideology inherent in internet culture. His "paintings" are made from bleached, burned, copied denim—ideas from every male painter grappling with pushing beyond the medium—and reformed into a flaming tracksuit for sale by DIS Magazine's DISown. This flaming "sweatsuit" is, indeed, a linkable, thumbs up-able thing, and yet its self-reflexive capitalist knowingness is likeable. Arunanondchai’s got a post-internet art attitude that’s bigger than glib, more confident, while referencing and appropriating like crazy from the artworld it lives in—a game that’s both one-upmanship and like biking with stabilizers. 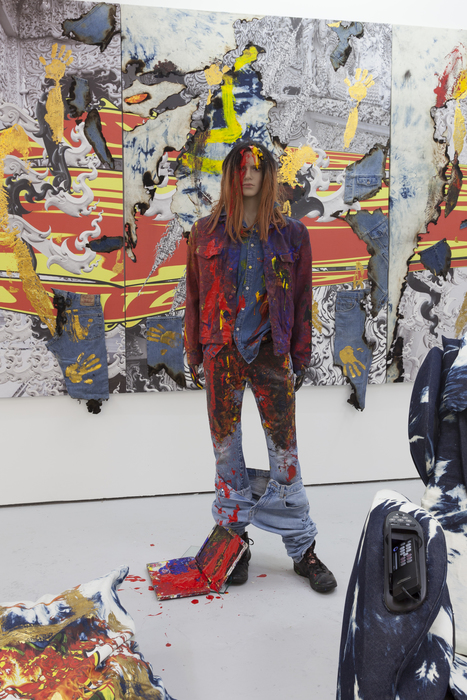 In her introduction to MIRRORCITY at the Hayward Gallery, curator Stephanie Rosenthal uses the allegory of J. G. Ballard’s Concrete Island—a story in which a man stranded in the middle of the intersection between the M4 and the Westway withdraws into his mind, surviving on his wits and the contents of his car—to evoke the London artist in the digital age. Rosenthal selected artworks for the show which, like Trecartin and Fitch’s version of post-internet, often create immersive worlds. The focus here is on the digital as information to be mined—be it as text, image, video, audio, or as modes of research.

In Lindsay Seer’s Nowhere Less Now (iamnowhere) (2014) a huge shipwrecked hull contains eye-like projection orbs, distorting her videos. She's mined an archive for congruent stories through which research links have become narrative devices. She slips from expressions of a love of dance to the horror of a fascist regime. The “i” of iamnowhere at once loses and forms itself in information. MIRRORCITY's interior worlds are so independently compelling that it’s hard to orient yourself from one to the next. Even Emma McNally’s drawings need to be built into a space on their own. Map-like and vast, they seem to have specific meaning redacted, leaving the sense that there is no real space not drawn on by data, like the NightSky app’s constellation mapping revealing a series of dots, dashes, points and lines overlaid onto the world. 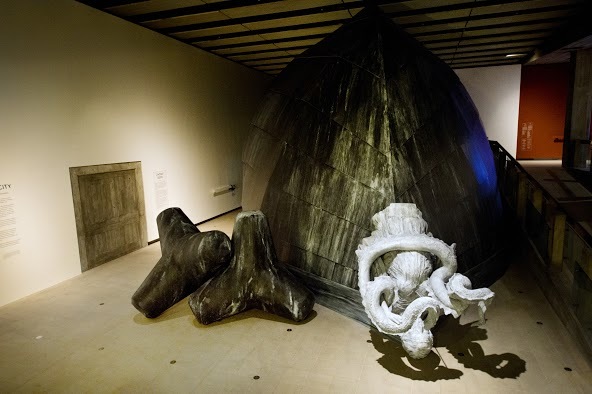 The interior connectedness inherent in the works in MIRRORCITY is somehow incongruent with the communal connectivity implied in digital culture. Sadly, MIRRORCITY as a group show suffers because the works end up being closed off next to each other and come off as inward looking, with their own internal logics. And yet this very fact, that the web draws you in down its research holes, seems evidence of the biggest identity crisis of them all. Artists using the internet are introverts mining information to pose as extroverts, failing to fulfil the net’s utopian promise, never less and yet more connected.

(Image at top: Ryan Trecartin, Still from CENTER JENNY, 2013; © Courtesy of the Artist and Zabludowicz Collection)

Under the Radar: Alysia Davis | Bethanie Irons | Jacqueline Huskisson
10/21/18
COMMENTS (1)
this is a much appreciated article in that it lends some intelligence and subtlety to the argument around "post-internet" work. Droitcour's recent sophomorish attacks on "post-internet" work, a label which is more generational than conceptual, is entirely misguided even despite some of the more obnoxious elements of "post-internet" art. His central argument blames a generation of artists for a capitalist brand mentality and awareness of a gallery system that was codified and systematized by a generation closer to the generation of said artists parents in the 1980's and 1990's in PRINT art publications. Or is everyone too young to remember Mariko Mori? Matthew Barney? the 80's? in glossy print like magazines like eh hem..Art in America.
Comment by: mjshroads on Monday 11/24/14 at 5:46 AM
ArtSlant has shutdown. The website is currently running in a view-only mode to allow archiving of the content.