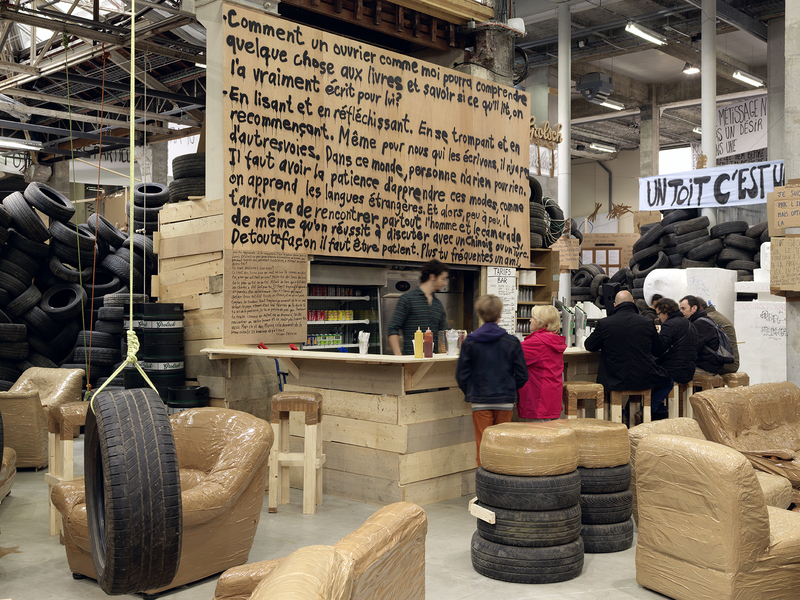 To enter this exhibition is to descend into an anarchic post-apocalyptic maze where mankind has come to rely on parcel tape as never before and small children run around like fuzzy static magnets for polystyrene debris. Yes, we are entering the world of Thomas Hirschhorn on a quite unprecedented scale, and as ever the Swiss artist presents us with an immersive vision.

This is an exhibition where you can spend time, and after contemplating disruptions in doxical praxis you can watch DVDs, eat hot dogs, swing on tires, carve sculptures out of polystyrene—particularly enjoyed by the children—and buy beers at a fairly cheap bar. Yes. Buy beers at a fairly cheap bar and then repair to a tent, or whatever corner of the maze you so desire, relax on a parcel-tape-wrapped sofa and contemplate the nature of his art. Which is? Well. 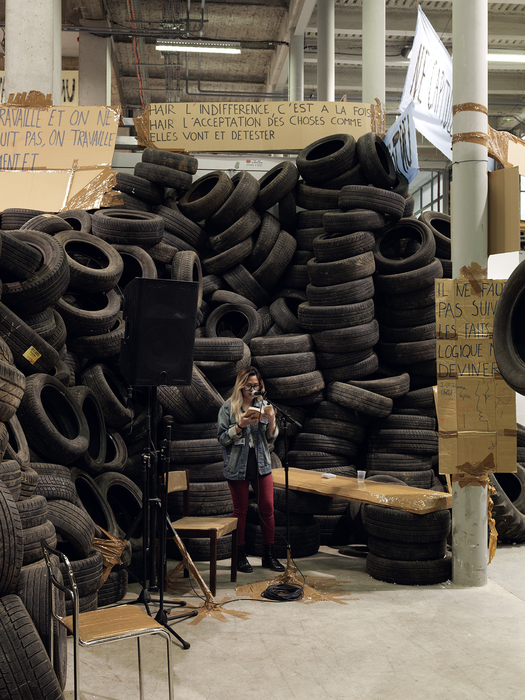 The thing about this space is that it does feel post-apocalyptic, but it could also be a rendition of Hakim Bey’s Temporary Autonomous Zone, and if I had to guess I’d say it was rather more the second, which is perhaps a new element for this artist. I’ve never seen a Hirschhorn show so interactive, and the trick he pulls so successfully here is to allow the atmosphere he always creates in his installations to promote creativity from the public. This isn’t just offering pens and paper, or in this case polystyrene and saw, but in a way liberating us from our everyday lives, a parallel space if you will. The question I asked myself as I sat on said sofa was why it works, and the thing that Hirschhorn does so well—and this is no exception—is that his vision is so complete, so total, even with his signature poor materials, that we still see a grand vision and it’s this that the public perhaps feel in this space. It is also a political gesture, and this is made quite overt by the slogans and banners that hang from the ceiling; this is a protest space bought into the gallery, which is, in a sense, a questionable gesture. 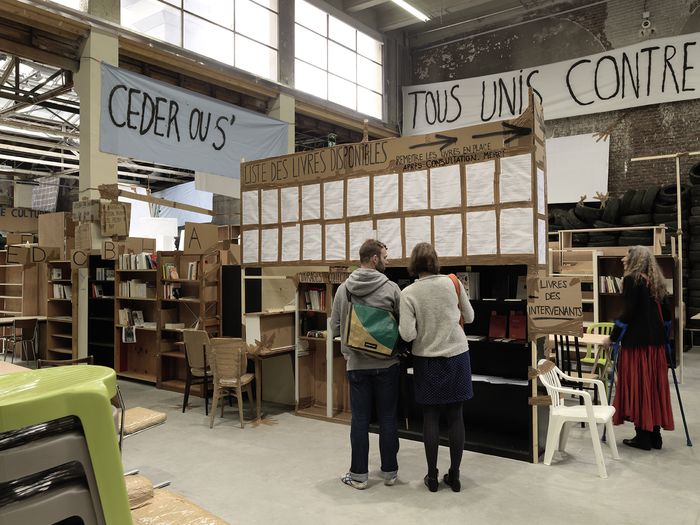 In one way it might be the capture of the zeitgeist—reminiscent of the eighties fashion world lifting the life of nightclubs and putting it straight onto the catwalk—shaking the art world out of its easy globalized business lethargy, or it might just as easily be denatured protest packaged, occupy for some chin scratching family fun. It’s an impossible question, but perhaps one to raise while sipping one of those cut price beers. Either way, the thing that is impressive is that people do get involved, and they do have fun and there is no way the experience of being here can be the cultural equivalent of window shopping that a gallery visit can so often be. It is a place to spend time, to relax, to talk, to draw on the walls, to perform improvised slam poetry, whatever you want. It is also the first exhibition in a long time that I will definitely return to, maybe on several occasions.