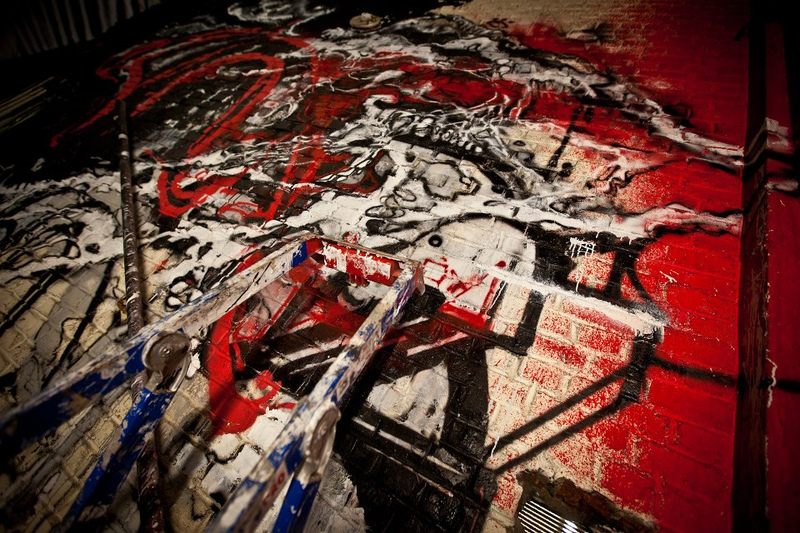 ArtSlant STREET: In the Entrails of the Secret Palais

If we can blame contemporary art exhibitions for being inaccessible to the general public because of their conceptualism, it is also true that urban art exhibitions often tend to focus on aesthetics only. Indeed, some of them are not much more than a static alignment of canvases whose main purpose is simple retinal seduction. However, spontaneity, with all the ingenuity it implies, remains an essential feature of this art born in the street.

So how can the urban artist benefit from this spontaneity, by creating works freed from academic standards and from the burden of art history, without showing too much naivety? Even if it is not its first purpose, the exhibition In the Entrails of the Secret Palais answers the question.

Everything began in April 2012. At that time, the Palais de Tokyo re-opened its doors after a year of renovation works. The finished work is impressive: the Palais went from 8000 square meters to become a 22,000 square meter area. In order to embody its anti-museum role, the new director of the Palais, Jean de Loisy, along with his team, decided to invite worldwide creators to reinterpret the different spaces of the huge building. Thus, corridors, windows, stairs and ceilings were transformed; the project, called Interventions on the Building, comprised fifteen projects until today. 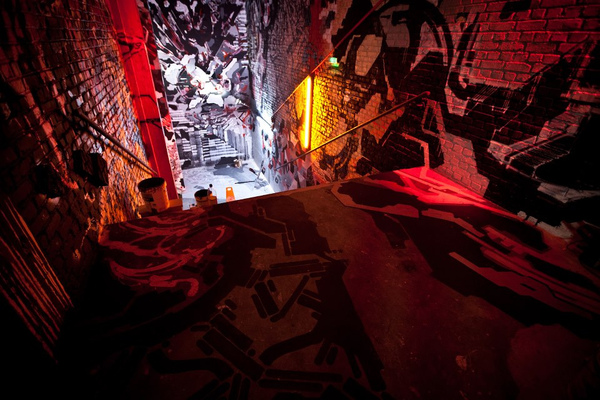 At the end of 2012, the American poet John Giorno was invited to be part of this ongoing and evolutive artistic adventure. He chose four walls of the Palais on which he wrote his short sentences with adhesive. On two of the four walls, Giorno collaborated with the French writers Lek and Sowat. To realize these collaborative works, Lek and Sowat first used their abstract and destructured graffiti as the background for Giorno’s words. They painted over Giorno’s adhesive letters then took off the adhesive to reveal the poet’s messages saying, “Just Say No To Family Values” and “A Hurricane In A Drop Of Cum”.

Thanks to the success of this collaboration, Jean de Loisy, with the artistic advisor Hugo Vitrani, allowed Lek, Sowat and a third artist named Dem189 to re-interpret, with their graphic codes, one of the secret spaces of the Palais. The space that the artists interpreted, an emergency exit passageway – with its industrial and raw architecture, two large stairs going down on a low-ceilinged room finally leading to (closed) doors – perfectly matched the type of environment the trio was accustomed to painting in. At this moment, underground entered the institution. 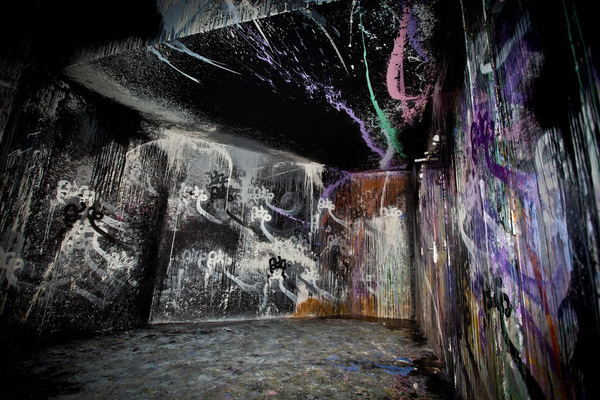 The opportunity was a perfect one. Not only because they could freely create, without a curator or any obligations, but also because they took the chance to invite graffiti artists we don’t usually see in regular exhibition spaces (such as Azyle, Babs, Cokney, Dran, Rizote…). Each of their fifty guests participated in what became a total artwork. Indeed, in the Entrails, everyone left his mark, alone or accompanied by another artist, knowing that all the work made will be, during this evolutive process, transformed, destructed or included in this one and only artwork – the complete and final one. Finally, without maybe even realizing it, all the artists perfectly respected the leitmotif of the Palais de Tokyo which is, under Jean de Loisy era, to understand the Palais as “a Dionysian world made of ongoing creation instead of the Apollonian world of great museums.”