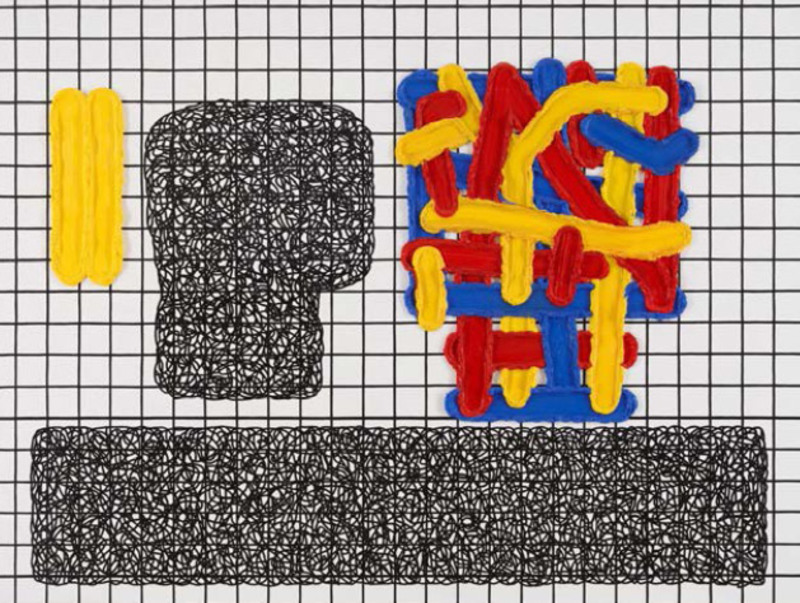 A show at Galerie Thaddaeus Ropac, through Feb. 2, features ten of this American artist's new works. Like most of his paintings, they consist of variations on a background of grids overlaid with shadowed or scribbled rectangular forms and heavy, sculptural squiggles of primary or secondary colors.

Together they call to mind lines from an early Wallace Stevens poem, "Thirteen Ways of Looking at a Blackbird": "I do not know which to prefer / The beauty of inflections / Or the beauty of innuendoes." 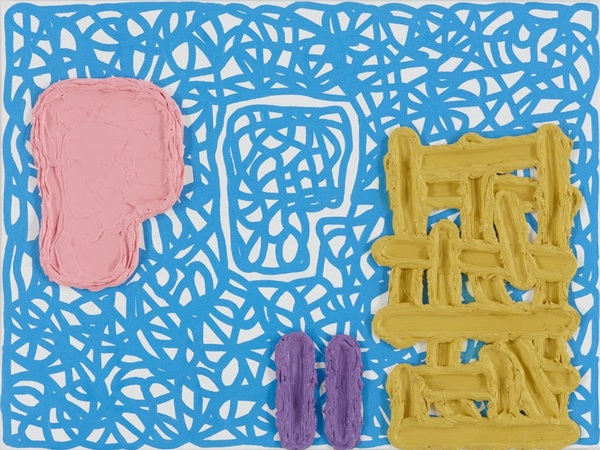 Lasker explores the inflections, the innuendoes of hues and geometric forms that represent themselves rather than convey meaning for representing something else. These are works that simply ask us to see. This is hard enough for most of us who can barely register events that zip around us everyday in blurs and false sensations let alone actually recall something in its palpable thereness.

By reducing (or, perhaps, ennobling) a form to its basics – a gray rectangle, perhaps, that glows on a graph grid – then placing beside it a similar but altered shape whose bold colors give it recrudescent life, Lasker wants us to look at what we ignore, or to imagine what we suppress. As words are formed by sounds, phonetics, intonations, so sights are by shapes, colors, variations, and thoughts by images, sounds, glimpses. But we need to see the basic thing to sense its different iterations – we need to work our way up to a subtlety of perception. 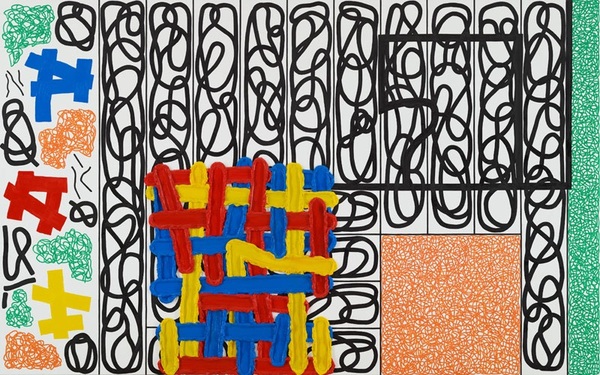 The titles of Lasker's works are playful, a welcome touch in an age of endless walls of untitled canvases. Some even seem as if Lakser could have taken them from Wallace Stevens' poems, as in "The Boundary of Luck and Providence," an exhilarating large painting (75 by 120 inches) that for all of its intense reds, blues and yellows, is also calming in the manner of meditative breakthrough.

Here, the canvas is divided into a series of eleven vertical planes. At right is a kind of Barnett Newman "zip" in light lawn green, at left is a wider vertical that contains green, blue, red, tangerine and yellow shapes – cloudlike scribbles, hatch marks, pretzel twists, morsels of black lines like visualizations of string theory. The other verticals contain fluid almost-vibrating lines unraveling and floating within their vertical bars. At the bottom center is a lattice patch of blue, red and yellow laid on with thick ribbons of paint. To its right is a square made up of that tangerine-orange scribble you see at the left, but almost mottled together, like a Wilkinson Microwave Anisotropy Probe picture of the cosmic microwave background (left over from the Big Bang) digitally altered to make it visible to the human eye.

These are simple forms and colors that convey, through their interplay of horizontal and linear line, of flatness and three-dimensionality, of placement within the frame, a genuineness untethered to actuality that feels as real as the touch of a finger on a sequined cushion and as shimmering as the sensation of abstract thought within the context of being not only awake but alive. 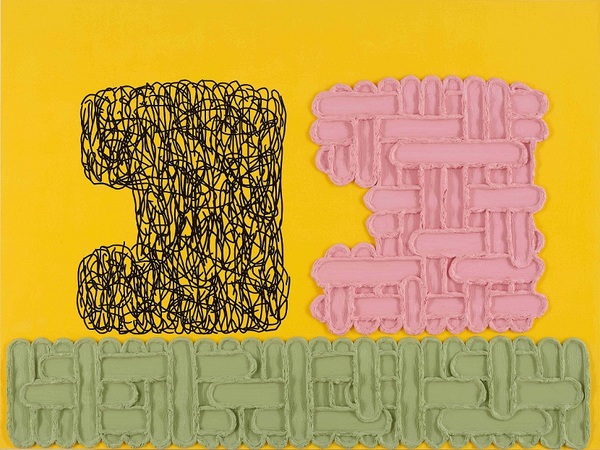 The painting "Life Without Thought" shows two thick C-shaped forms the one at left composed of black scribble, the one at right a lattice of thick pink, like frosting on a cubist cupcake, set just above a lattice border of dull gray-green, all floating on a field of yellow. It's the absence of shadow in a world of muddled light, pastel without modulation, as its title implies.

These are joyous, reasoned, passionate works. They trace moods through something indecipherable – they are, after all, abstractions – but Lasker has a way of anchoring us to them. Sight made tactile, thought made figurative.

(Image at top: Jonathan Lasker, The Consequences of Idealism in an Imperfect World, 2011, oil on linen, 152 x 203 cm; Courtesy of the artist and Galerie Thaddaeus Ropac - Paris)

Look out for the unicorn Elisheva Biernoff
3/9/13

Materiality and Surface: abstracting form Group Exhibition
1/24/13
COMMENTS (0)
ArtSlant has shutdown. The website is currently running in a view-only mode to allow archiving of the content.