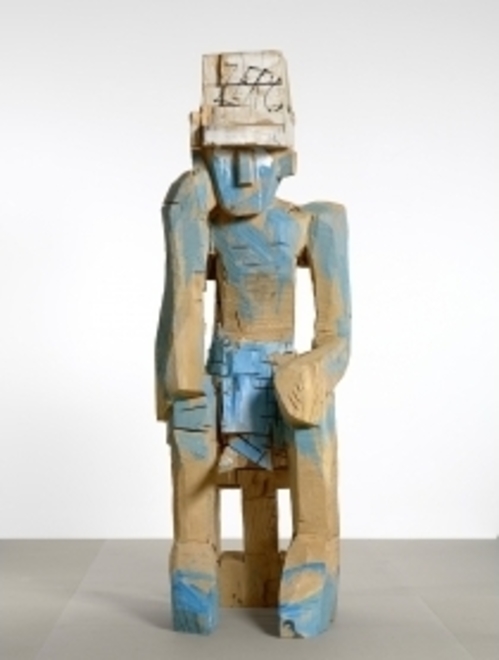 Nothing I have to say about Georg Baselitz’s sculptures will do justice to their magnificence. And from the start, it must be clear that much of their magnificence has to do with the way they are exhibited at the Musée d’Art Moderne de la Ville de Paris. Each monumental sculpture is given its own space, a space it devours with the intensity of its emotion, a space into which we are invited to become embroiled in this intensity. Though it is difficult to privilege any of the sculptures above others, walking around the curvature of the museum space to be met by the Dresdener Frauen was an unforgettable experience.

Placed at the top of the steps, and further raised on their pedestals, the monumental heads and the power of these women of Dresden are overwhelming. I stood still at a distance: their faces are frightening, deformed by a chainsaw to be made unrecognizeable. Painted yellow, in contrast to the works up until this point in the exhibition which are tainted with red, their colour emboldens the women. Their oversized heads are imposing, apparently towering over us, monumental. They look down on us, not to belittle us, but to remind us of the depth of their suffering. Dresdener Frauen is one of the only series of Baselitz sculptures that makes direct reference to German history, though of course it is everywhere present in the tragedy and violence of his sculpted figures. Made in 1989, these women prompt the awareness that the bombing of Dresden is still playing on the German conscience when the Berlin wall falls forty-four years later. 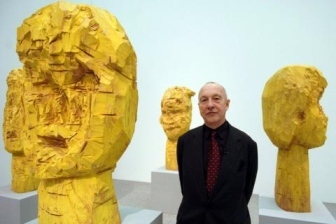 Up close the womens' faces, like those of other sculptures, are lost to abstraction. The trees from which they are cut, and into which they are carved, hacked, and slashed are mutilated to make faces, torsos and body parts, that are just as violently and aggressively deformed, permanently scarred by chainsaw and chisels. And all of the aggressivity and anger makes for wounded giants that are both monumental and fragile, a contradiction that, in turn, makes them terribly moving. They are gentle giants who, although they loom over us, are perfectly at peace, and in silent acceptance of their own immobility and fragility. 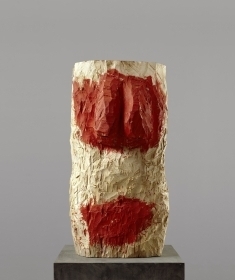 Georg Baselitz, Männlicher Torso, 1993, Tilleul et dispersion, 155 x 77 x 79 cm, Staatliche Museen zu Berlin, Nationalgalerie, Collection Marx, Berlin, Photo: Jochen Littkemann, Berlin © Georg Baselitz
The layers of complexity are always unfolding as we study the detail of the incisions in the wood, like the marks left by a painter caressing his canvas with a brush. But these “gestures” also present as wounds of self-mutilation, they tell of an anger that has no other way of expressing itself than to attack the body that imprisons it. The anger and violence scar the surfaces, usually going against the grain of the many different types of wood used by Baselitz: birch and beech, ash, maple, and the inevitable German lime tree. While there are many different trees, the sculptural work doesn’t change much over the years; but yes, the subject matter changes, color changes, the deformities change. However, the basic method, technique and devastating outcome of Baselitz’s sculptures remains consistent. 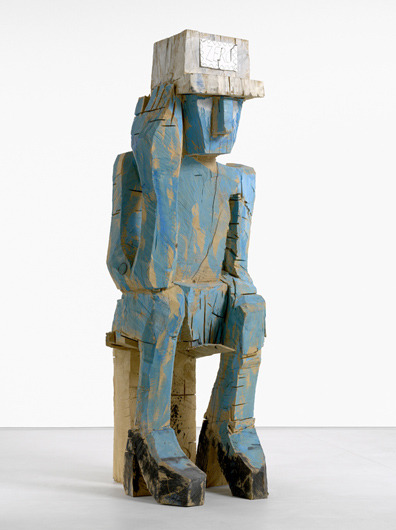 The exhibition closes with three “self portraits,” childlike figures, exhibited together, facing each other in a circle. What is most curious about them is the fact that Baselitz turns to the self-portrait in 2009 at age seventy-one. Most artists and writers typically begin their lifelong devotion to their art with self-portraits, and some might repeat the fascination with self throughout their lives. Not Baselitz. Even though these figures look young, innocent and childlike, they come in the latter years of his life. This is made more interesting by the fact that they are childlike: their "hats," the oversized “shoes,” where some earlier figures didn't even have feet, the pink nipples and bare chests, and the awkwardness of genetalia that have been hammered on afterwards.

Unlike Michelangelo’s figures of perfection, these people are not found inside the stone that incarcerates them. Baselitz’s figures are chiseled and hacked out of the wood, formed if you like, by the knives that render them. There is so much tragedy here, the genitalia, the mouth, the eyes, the breasts of the torsos and heads, that is, those places on the body that give us identity are not carved out with care, they are hacked away. These are deformed bodies: the feet cut off, the breasts cut off, and red paint in their place as though the wounds are still bleeding. Even at a quick glance, Ding mit Arm, 1993, is a war-wounded soldier who has been so maimed, mutiliated, amputated and made androgynous. And though this “Ding” has no specific reference to Germany’s history, I see it creating the pain evoked by the piece. The suffering of the Ding reminds me immediately of the World War I heros left to litter the streets in Otto Dix’s drawings in particular.

When I am with these sculptures I think, or am reminded of how deeply ingrained the trauma of WWII is in the German psyche. It’s easy to forget this in a post-1989 world in which Germany is the only contender to lead the Eurozone out of trouble. When I first studied Baselitz’s work in the late 1980s, the paintings, often of doubles and dissected bodies, were understood as a reflection of the chaos of German division. While I would want to see the paintings as much more than a simple expression of recent German history, there is a level on which the sculpture cannot be unraveled from twentieth-century German history. I can’t imagine these works coming out of any other country: the engagement with the monumental, together with their evocations of violence, the intensity of expression, the emotional fragility, their sadness and melancholy. Together with this, as I say, up close the serrations are abstract, and thus, the work pushes up against the possibilities of modernism. While some of these elements might be found in American art of the late twentieth century, altogether, they could only be found in the work of a German.

~Frances Guerin, a writer and film-historian living in Paris

Under the Radar: Miika Nyyssönen | Amber Renaye | Stanton Hunter
11/2/18
COMMENTS (1)
Elke
Thank you Frances Guerin for your critique. Your description of the works allows me to almost see it but definitely to 'feel' it. Living in Sydney I will not be able to see the exhibition.
Comment by: Elke Wohlfahrt on Tuesday 11/22/11 at 6:12 AM
ArtSlant has shutdown. The website is currently running in a view-only mode to allow archiving of the content.