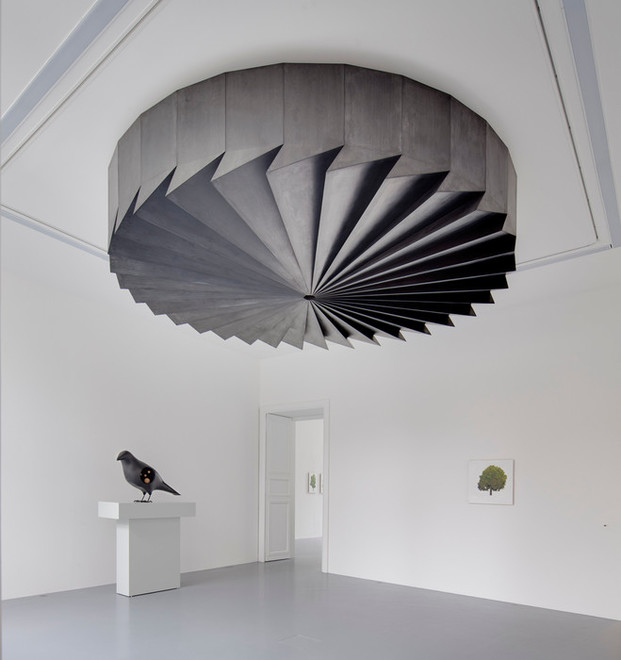 French artist Xavier Veilhan gives us a distillation of forms: representation without detail. In his new show. "Orchestra," at Galerie Perrotin in Paris through November 12, Veilhan uses sculpture, mobile and painting to sketch objects in space without giving them more than what's necessary to identify them. They exist without meaning, whatever meaning is for Veilhan since he's not interested in story as much as thereness.

For instance, in a large room just off the entrance, Veilhan has constructed "Le Monument, a kind of stationary parade float, with two nude woman – one standing with a raven or crow on her shoulder, the other sitting – and a nude young man lying on his stomach. They're positioned on angled blocks which are vaguely futuristic (any hint of aerodynamics still seems futuristic). At the front of the display is some vegetation, and to the left of the seated woman, who gazes out at nothing, is another bush of some sort. Everything except for the vegetation is in red lacquer, which doesn't dehumanize the figures as much as render them humanoid: assembly-line beings. This is very much a gallery piece, something for public viewing, something to walk around, consider and move away from. Yet you remember it somehow, regardless of its apparent lack of "story" or meaning. The relation of the figures to each other, their lacquered stillness, is a little disquieting, like the realization that you've forgotten something that could be important.

That crow, this time in black, appears in another room diagonally under a large ceiling sculpture, "The Turbine," in black carbon steel. It's rather beautiful, this turbine/fan object, its ridges more mathematical than threatening. The black crow, called here simply "The Bird," stands looking away, regarding – like so many figures or animals in Veilhan's bestiary – nothing in particular, but certainly not the viewer. Perhpas something in the distant future, or a longing look to what could have been? 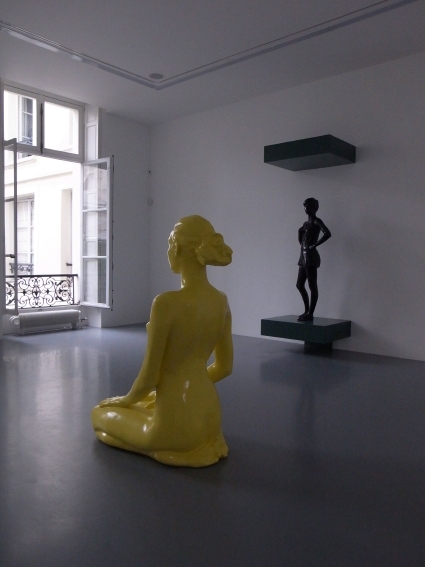 Another statue, "Alice," in bronze and epoxy paint, shows a woman sitting on her haunches, her hands resting in her lap. It would be a study in blank serenity were it not for its yellow color, which undercuts the position of the figure; it's actually an eerie nude, like a life-sized toy figure. "Marine," a painted bronze figure of a woman with all the expression of a storefront mannequin has a similar effect. Standing on a green plinth – and underneath a green "roof" the same size, this figure makes you reconsider a statue not as something that corresponds to an expression of humanity, but rather of contemporary affectlessness.

Veilhan's mobiles and stabiles are graceful evocations of the nature of space and stillness. The stabiles – in white, or bright yellow or green (the color of Parisian park chairs), look like three-dimensional Mondrians. I particularly liked "Mobile No. 4," made of carbon tubes, rope and aluminum, which hangs like vanishing-point cloud formation in an industrial sky, gently swaying at the ripples of air. The small paintings of trees, which are separated from the ground, from nature – they seem to be floating, as if they were isolated for a portrait against a white background – are lovely and, hung here in rooms with the steel and bronze and other modern-day constructions, are like the memory of what used to be before man began to synthesize form.

This is a gallery installation that works as a whole; it's not a simple assembly of objects. Here, while there's no narrative to follow (not that you need one), the objects in relation to each other have a narrative effect. They relate to each other in ways you can't quite fathom but that somehow seem right, as if shapes and colors could communicate a sense of the world.

Posted by Robert J. Hughes on 10/17/11
RELATED ARTICLES
COMMENTS (0)
ArtSlant has shutdown. The website is currently running in a view-only mode to allow archiving of the content.