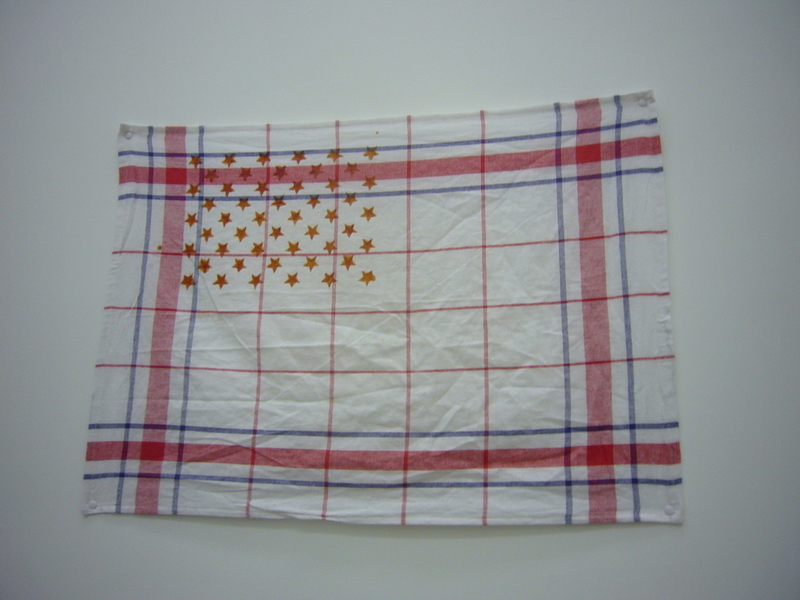 The Emergency Room is more of a concept than an actual exhibition.  I might talk about the works that were on view when I visited, but most likely they won't be there when you do.  The Emergency Room changes every day in a near impossible cycle of absolute contemporaneity.  The exhibition is characterized by a "tomorrow is too late" manifest for non-apathetic artists who are "burning" to produce work that comments on the "emergencies of today".  As expected, this approach encourages work involving news media, collages, and lots of text.  Given that the exhibition is open to any artist, you might expect this to be a desperate grab for wall space for emerging artists who've never shown in a gallery, or a pandering attempt to fit the format of the show.  But the rules make it clear: the Emergency Room is not a "flea market" and "Art-in-Stock" is not encouraged.  These emerging artists must make the case that theirs is a true emergency.

Perhaps the most interesting part of the exhibition is not the Emergency Room proper, a circular space (so there are no arguments as to where is the best spot) where each piece is shown for only one day, but upstairs in the Delay Museum, where particular works from the Emergency Room are archived and institutionalized in order to study the "aesthetics of emergency."  With the french word for delay (retard) written in red paint on stacked canvases everywhere, there is a mocking tone to this part of the exhibit, but "what is pejoratively called delay [retard] for Emergency Room seems to be fresh in the contemporary world."  Some of the freshest is work that of artists including Thierry Geoffroy / Colonel (who originally devised the Emergency Room format and could be seen as its guru of sorts) made on the occasion of Paris' FIAC 2008: a cardboard sign reading CAUSE OF RECESSION BIG DISCOUNT ON MY ART COLLECTION with a xeroxed copy of Damien Hirst's diamond studded skull; a video of Geoffroy / Colonel wandering through FIAC talking loudly on his cell phone, "No there is no crisis in contemporary art.  There is no crisis in France.  No, it's a great ambiance here at FIAC, everyone's buying.  No this is no flea market!   NO, there IS no crisis in France!"

The Emergency Room is of international scope, and has been enacted so far in galleries in Berlin, Copenhagen and Athens, and most recently at PS1 in New York.  The Emergency Room Paris is running concurrently with another gallery space in Napoli.  One might ask, though, when confronted with the problem of locality--what happens when an artist in Los Angeles is "burning," but the closest Emergency Room is all the way in Paris?  What happens after the Emergency Room exhibition is over?  The answer: "Every large city should have a permanent Emergency Room, now."  I agree.

But until then, artists have the recourse of utilizing their local forum for urgent creation--the street.  Perhaps it has less credibility than a gallery space in Paris or New York, but this is the place where one could study the aesthetics of emergency and the ways artists respond to contemporary issues.  I'm directly reminded of Bruce Tomb's (de) Appropriation Project, as "custodian" of a wall in San Francisco that attracts an inordinate amount of political graffiti, posters and other street art.  At a public meeting about the wall someone described it as a "living newspaper."  This would seem to be the model the Emergency Room strives for, but rather than layering pieces over pieces as in street art, the Emergency Room is always refreshing, sometimes archiving, and constantly curated.  There are problems with both models: in the Emergency Room, these urgent issues are exhibited, but to whom? A gallery setting can only reach a certain segment of the population; whereas the street art model reaches many more people, it is more likely to be disregarded.

In an ideal world every large city would have both an Emergency Room and a Freedom Wall, and in an ideal world art would have the ability to enact social change, to spark real debate, to draw people out of their numbed acceptance of the status quo.  Visit the Emergency Room today, tomorrow and the next and see what you think, or bring what you think.  Bring your own artwork that must be exhibited today, because tomorrow is too late.

(But if for any reason you can't make it, you can see the progress of the exhibition online here.)

Posted by Natalie Hegert on 11/10/08
RELATED ARTICLES
COMMENTS (0)
ArtSlant has shutdown. The website is currently running in a view-only mode to allow archiving of the content.