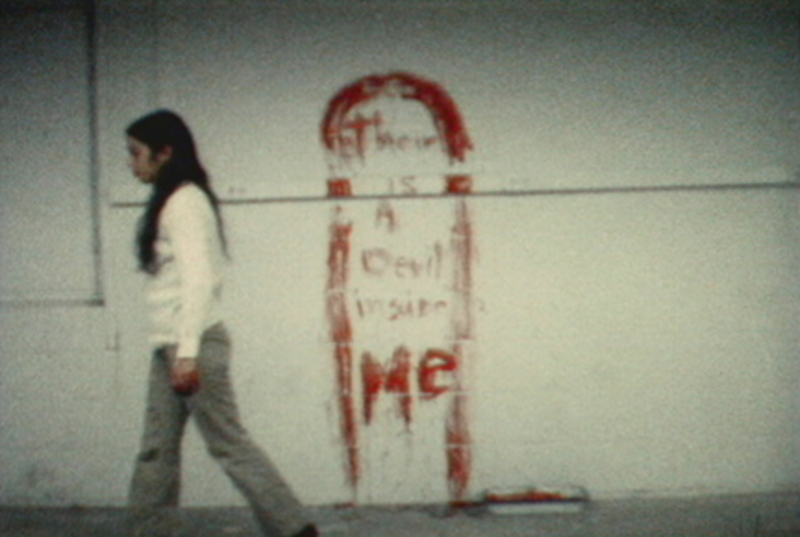 Provocative but not Belligerant

This long awaited exhibition of Ana Mendieta’s work in Paris, appropriately titled Blood and Fire, divides Mendieta’s early and late work into the two halves, two rooms at Galerie Lelong. The interpretation of Mendieta’s works are always up for grabs because they carry an obscurity and an ambiguity that open them out to an address of so much more than what is actually represented. Mendieta’s work is always provocative but never belligerent, thus carrying with it a wealth of possible interpretations. The early work of the 1970s uses two media – her body and blood. These mainly photographic works on display at Galerie Lelong are both intensely personal, and though many critics would question this, to me they simultaneously have a generality, a deeply political motivation and affect. With their provocative use of blood, by default speaking to the discourses on violence against women as well as women’s impassioned retort to this violence through confrontation, Mendieta’s work cannot help but remind us of the exciting feminist debates of the 1970s. In one photographic series, Untitled (Self Portrait with Blood),  1973/1997 a series of six photographs showing Mendieta’s face with blood dripping from an invisible wound we see and understand domestic violence towards women. It is true that a photographic series such as this is always about the artist’s own pain and trauma, but its resonance is also much greater. The specifics of the violence, both personal and political, that might have lead to the wound we cannot see are deliberately obscured, thus leaving us to imagine for ourselves. 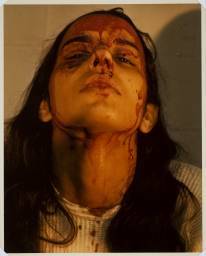 That said, for all of the power of Mendieta’s use of blood, in all of the photographs and films, there is always a possibility that it could in fact be red paint. Not only does it sometimes look like paint (see for example Untitled (Blood Sign #1) above, but she also uses blood as though it is paint. Mendieta applies blood to walls, her body, wipes it over a plastic sheet, covers herself in blood to play the victim of a rape [Untitled (Rape Performance), 1973]. There are times when it is difficult to tell if we are watching her wield paint or blood around a surface. And this ambiguity around the medium she is using both connects her oeuvre, for example, to artists such as Yves Klein who use the body as paintbrush and canvas, as much as it establishes a relationship with feminist performance artists such as Karen Finley who use the body as the medium for expression of the woman’s journey.
In the second room of the exhibition, fire leaves its trace like blood from an unknown violent act. Like the absence of the visual source in the blood works, those that use fire and gunpowerder as their medium, especially in its connection to the earth are about someone who has now left the scene of the crime. Again, in the same way that the photograph documents someone who is no longer there, the land in works such as Untitled (Gunpowder Work, #2) has been purged, cleansed of the person whose shape nevertheless remains. And it is, of course, the familiar silhouette of Mendieta herself, a silhouette that ensures the memory of the now absent Mendieta is kept alive. Indeed, this sense of the continuity of the spirit, be it of the artist, of the woman’s body, of the rituals that bear their traces in the works, is captured so exquisitely in Ñáñigo Burial, 1976 in which a series of black candles placed to outline Mendieta’s small body continue to burn and leave their trace in the form of black wax on the gallery floor. 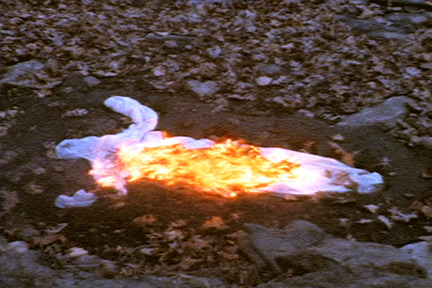 I am tempted to think of Mendieta’s work in contrast to the photographs of Candida Höfer, not because they have any relationship whatsoever, but simply because I saw exhibits by each on the same day. Mendieta uses the word silhouette in the title of one of her films: Silueta de Cenizas, 1975, which looks to represent a sheet being born through fire. The title reinforces the idea of the missing person, the sense of absence and eternal memory as this absence is left to scar the landscape. Mendieta’s is an absence that is far more personal, emotional and devastating than the human absence often referred to in Candida Höfer’s photographs. Because in Mendieta’s works, part of the person remains to disturb the balance of the world on view to the camera. The memory, their memory is now imprinted, or rather, burnt into the landscape. Through the body's integration into the natural world the person becomes forever remembered.

Similarly, unlike Höfer who is so committed to the structures and mechanics of photographic representation, Mendieta works in sculpture, film, crayons, acrylic, as well as photography. She is an artist who reaches for a given medium in response to whatever it is that needs to be expressed inside of her. And even though very little might be said to “happen” in these works, they are moving and evocative because Mendieta’s sole purpose is to give voice to that expression.