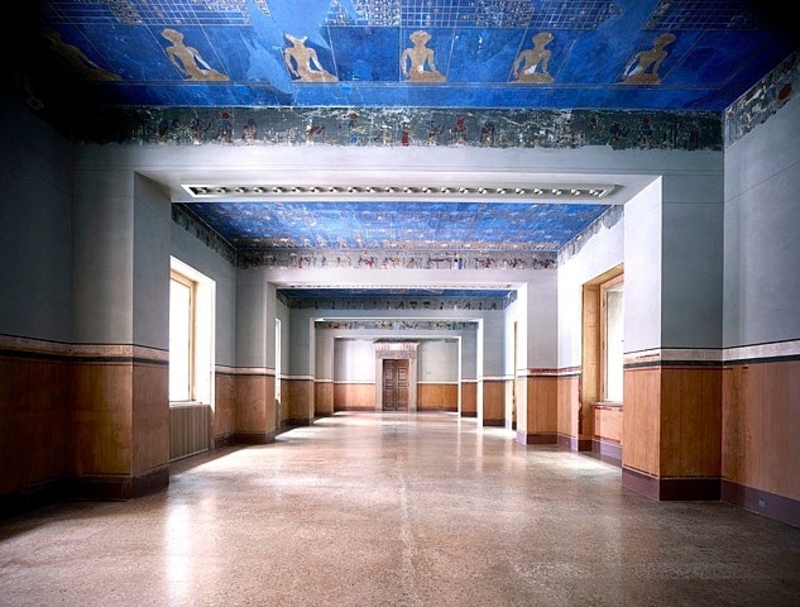 Absence at the Center

Like others of the descendents of the German realist photography of Bernd and Hilla Becher — Andreas Gursky and Thomas Struth, to name just two — Candida Höfer’s insistence on a repetition of composition, subject matter, and thematic concerns, might tempt us to argue that there is nothing innovative or individual about any of her photographs. Nevertheless, seeing eleven large-format photographs together in Erinnern at Yvon Lambert this afternoon, I am very quickly reminded how misleading this assumption is. The photographs on exhibition here were taken of the Neues Museum in Berlin, the Archivo General de Indias, Sevilla and the Archivo di Stato Napoli. All were taken in 2009-10. It is unclear why Yvon Lambert selected these particular eleven photographs to go together, and though I could question the decision, it seems more provocative to think about the result of the curatorial decision.

Höfer’s photographs are usually discussed as having an “absence” and a “distance” at their center. Obviously, critics are referring to the absence of human life in places and institutions that are typically seen and experienced as filled with people. However, this absence becomes the literal space into which we are invited to walk in order to become integrated into Höfer’s image. Standing before Höfer’s photographs is about as close as a contemporary artist takes us to entering the uncertain world of Velasquez’s Las Meninas. For as we walk toward Höfer’s represented spaces, we also walk into that space. At least this is the optical illusion created by her extraordinary constructions of perspective and space. Indeed, when we are up close to the images, we become surrounded by the walls, the ceiling and we walk on the floor in the photograph. And so, in spite of the photographic rationalization of architectural spaces, in spite of their clinical depiction of institutional interiors, they are extremely disconcerting. Höfer breaks the imaginary, un-visualizable line between representation and reality as she invites us to walk into the representational space. And momentarily, following these photographs’ command, I find myself struggling to exit this space. This experience which is had often before Höfer’s images becomes writ large in the experience of the Sevillan archive. 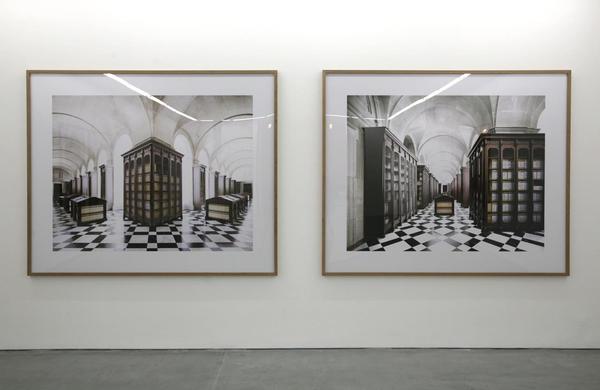 The Archivo General de Indias is the repository of the archival documents from the Spanish empire in the Americas from the seventeenth century. Indeed, as we approach Höfer’s photographs, we can see that all of the perfectly organized files, so perfect that they are integrated into the architectural form of the cabinets in which they are kept, are labeled “Sección Contratacion.”  And immediately we are reminded of the buying and selling, the trade agreements, the mechanisms put in place to ensure the smooth running of Spanish monarchical power. Moreover, all of the visible doors in the photograph are closed, giving the apprehensive, but thankfully, momentary sensation of being locked inside this vaulted chamber, together with all those bodies whose ownership we imagine to be detailed, hidden away in these files. 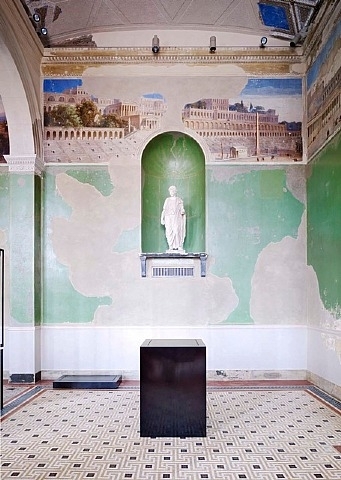 Again, in Neues Museum Berlin XV, I find myself drawn to an empty plinth, newly erected in what looks to be a centuries’ old environment. A classical sculpture watches over the plinth from his alcove above, and at the same time, he observes my look at the empty space that might once have been occupied by a sculpture, or perhaps awaits its next occupant. Above his alcove a medieval city still bears resplendence on high. I cannot help but fall into the space as though it is real, but know it is not. Thus, although there may be no traces of people in these images, they are waiting for us to enter them and bring them alive. Similarly, the building interiors themselves are brought to life, their historical, cultural and architectural lives are brought into the foreground even though they are the background of Höfer’s photographs.
Another gesture of individuality can be seen in the way Höfer has photographed the cultural and political histories of the three institutions and in what she finds in them. For example, Höfer exposes the age, the layers of history of the Neues Musem, Berlin, by drawing our attention to the literal layers of history on the walls of the building. We see freshly laid plaster, centuries old frescos, over bricks and marble, tiles, and gilted ornamentation from still different eras seemingly laid over one another at random. This layering of centuries and cultures is of course a literalization of the palimpsestic history of the city of Berlin. And all this in a museum puzzlingly called Das Neues Museum, the New Museum. 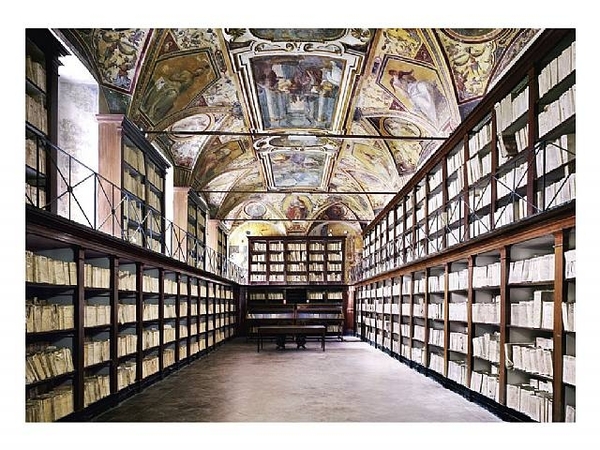 Similarly, the State Archive in Naples has shelf upon shelf of tattered files, consecutively numbered, and even though there is some writing on them, it is too faint for us to read. We don’t know what room we have entered; we don’t know if these are the files of murder cases or paleographic discoveries. If there is anything personal about the files, we have no access to it. It’s interesting to compare the organization of the files in the Naples State Archive and that in the Sevillan repository. Because despite the careful consecutive numbering in Naples, in Höfer's images there is something very disheveled about these files. They are of different sizes, their paper containers placed unevenly along the shelves, and again in a what for Höfer might be thought of as a radical gesture, in the second photograph (not pictured here) she has photographed them laterally, rather than in diminishing perspective. The sense of infinity continues off the right and left sides of the frames rather than into the background of the image, and thus emphasizes our inability to fathom this archive. Just as we might have the feeling of being locked inside the archives in Seville, we feel very shut out from the historical and cultural secrets in Naples.
Ultimately, taken as an exhibition, as photographs more or less given meaning by their display at Yvon Lambert, the images in Erinnern do, as the press release promises, offer an entirely new experience of these spaces. As we scrutinize the details of each image, the files in Seville and the walls, ceilings, floors and window frames in Berlin, we are invited to see what we would otherwise ignore entirely on our path through a space inviting us to look elsewhere — be it inside the files of an archive or at the works on display in the museum. In addition, Höfer’s images offer a unique experience of photography, an experience that has us hesitantly wondering where the reality of our own space ends and the representational begins.
~Frances Guerin, a film historian and writer living in Paris.