As my American friend and I left disappointed from the Marc Desgrandchamps exhibition at the Musée d’Art Moderne de la Ville de Paris, we passed by two of my favorite pieces in the permanent collection. Poorly hung, hidden underneath the huge staircase, poorly lit and not enough space in front of it to experience its full effect, is one of Andreas Gursky’s more difficult images, Bibliothek, 1999. I say difficult because unlike his best known work from the past fifteen years, Bibliothek confuses the trademark horizontality: the geometry of Bibliothek is eccentric and converses more with early, pre-cinematic forms such as the panorama than it does with landscape painting as is Gursky's usual reference. And yet, its geometry is not alone in Gursky's oeuvre. Unlike similar renderings of dimensionality – for example, Candida Höfer’s architectural spaces - Gursky's do not invite us to walk into the space of the library. And so we are placed outside this library, extraneous to it.  I also find Bibliothek beguiling and difficult for the simple reason that I have less to say about Gursky’s later work than I do his 1980s photography. With my interest in Germany’s Ruhr Valley, Gursky’s photography provides key examples of how the region has been culturally and socially imagined. Despite critics’ constant claim that Gursky’s aestheticization through digital manipulation universalizes, even effaces, the political and ethical content of his images, the 1980s photographs of the Ruhr Valley would tell us otherwise. Their emptiness echoes the isolation of these post-industrial landscapes.

Gursky's later work, however, as critics claim, is more focused on formal experiment and visual logic, aesthetic principles that leave little room for the representation of social truths. Bibliothek would ostensibly fit into this vein of Gursky criticism. Here we have a library that is not only unspecified by the title of the photograph (even though we know the library is in Stockholm) but Gursky has deliberately effaced all signifiers that might help determine where it might be found. He has chosen to photograph the language section of the library, and each section is labelled in the language of the books contained therein: SVENSKA, FRANÇAIS, РУССКИЙ, and so on. Thus, the library shelves could be in any one of these countries. Similarly, Gursky has digitally removed the floor creating a symmetricality with the ceiling, a symmetricality that is nevertheless symmetrical in form only. The floor of the library now mirrors the books on the shelves above, but not the ceiling which has also been erased through manipulation.

These manipulations are perhaps what keep us outside the library: not only is it an anonymous library, in its visual representation it is also an impossible one. What is unusual about Gursky’s library is that there are no people. For all of the themes of repetition, commerical obliteration of the human, Gursky’s photographs usually contain human figures, even if only to be diminished by the overwhelm of business, production or the proliferation of information. But here, there is not even the slightest suggestion that this might be a repository of information that has anything to do with human life. Information has here been reduced to an abstract, precisely organized image. 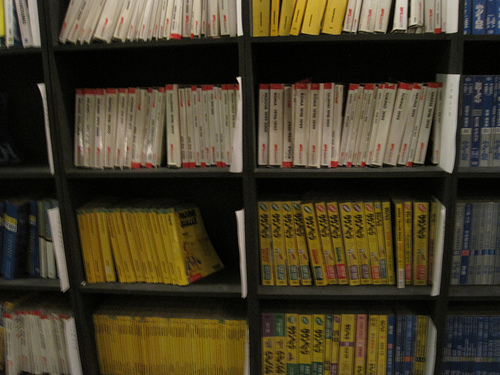 In another library, hidden in the bowels of the museum, is Christian Boltanski's Les Abonnés du Téléphone (2000) the third part of what might be understood as an installation triptych. Les Abonnés du Téléphone is a collection of over 3000 old telephone books from around the world, neatly arranged on shelves that line the space. In typical Boltanski fashion, the lighting is dim and adding to or replacing the visual obscurity of the installation is the familiar odor of old paper. Here, on level -3, as we enter this somewhat uninviting space, the smell however seems natural.

In distinction to Gursky’s slick and aesthetically brilliant (literally) library, Boltanski creates a space in which we want to huddle over and lose ourselves. There is nothing to distance or beguile us in the way that Gursky’s photograph does. On the contrary, Boltanski’s is a library that invites us to sit down and read. Long benches and tables with desk lights are placed as they are in archives all over the world. And immediately, visitors are drawn to the telephone books from the places they know; at least I was. I went straight to those from Adelaide, Australia, and searched for my father’s name and number in what would have been the last appearance of his listing in the telephone book before he died in 1999. On the slightly yellowing paper, I showed the entry to my friend, as though it might enable her to see him, to know a little bit about him. This process of creating and recalling memories is familiar from other Boltanski installations. He lures us into a world in which poor lighting is the attraction rather than a frustration as it was in viewing Gursky’s Bibliothek. And Boltanski asks us to explore through senses supplementary to the visual, often in spaces, such as an archive, where looking would ordinarily be privileged. In these spaces we are invited to take a journey into our memories, sometimes of events and of people we never knew, to experience memories we did not know we had, or memories we have for the first time in the presence of the installation. Thus, it doesn’t surprise me that inside Les Abonnés du Téléphone, while looking through otherwise ordinary anachronistic objects, I experience the memory of my father, a personal memory that Boltanski could not have known or anticipated.

And so these two artists, one German, one French, one overwhelmed by the alienation of the consumer world, the other obsessed by the shadow of the Nazi Holocaust in his own life, show us two extremes of what it is to lose ourselves in the shelves upon shelves of books in a library. And all this hidden in the basement of the Musée d'Art Moderne.