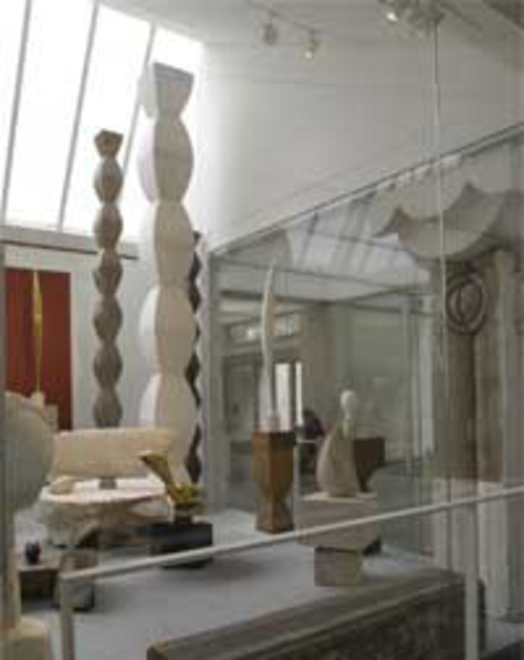 I had no knowledge of Brancusi's work in photography and film, so it was a delight and a joy to discover the seriousness and creativity with which he pursued both. Brancusi the photographer and Brancusi the filmmaker were every bit a part of his Paris intellectual environment as Brancusi the sculptor. My overwhelming impression of his work in the new media is its complement to the great innovations in the avant-garde of the 1920s. In spite of the varying degree of proficency with the camera, his use of light and its interaction with the world was clearly influenced by the radical experiments of his friends Lazlo Moholy-Nagy and Man Ray. And yet, Brancusi's work can be seen to do something different because so often, his sculpture is the subject of the films and photographs. 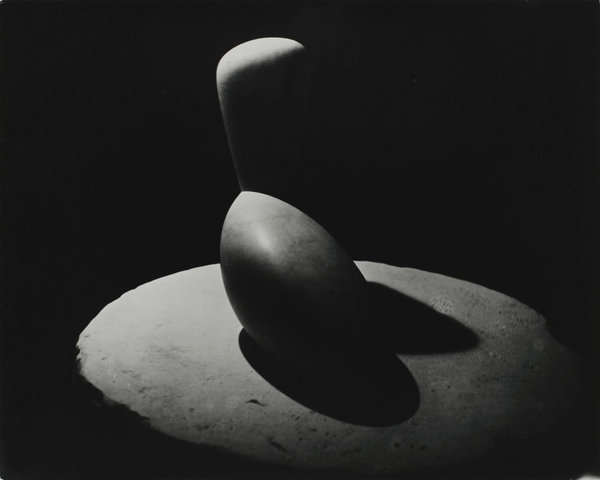 The exhibition claims that Brancusi's primary impetus for picking up the camera was to document his sculpture. Whether or not this is true, the photographic images of his own sculptures are exciting artworks in and of themselves because he simultaneously brings them alive, puts them in motion, and dissolves them as objects. The numerous photographs of the Leda sculptures — in bronze, in marble, in darkness, in light — are so vivid that we alternately see the swan flap her wings, and then lose all definition as she dissolves into an abstract compositional element in a play of light and shadow. In the photographs dated c. 1933-36, Leda realizes ambitions similar to Moholy-Nagy's photographs in which the purity of light itself becomes the artistic medium. However, while Moholy-Nagy does away with the object altogether, Brancusi's sculptural objects remain the focus of the photograph. And it is in their transformation through the photographic process that together, sculpture, light and camera produce a new art form. 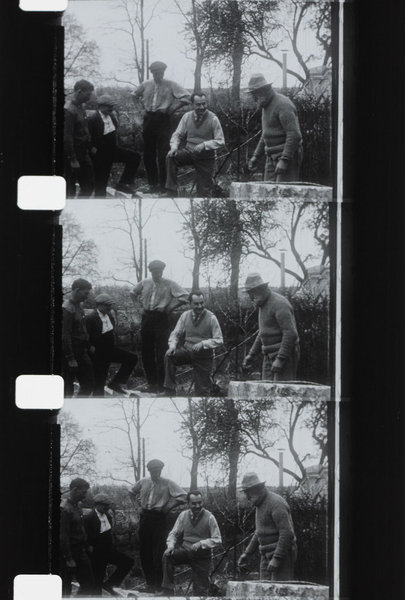 While others of the photographs create dimensionality, shape, textures, and spaces within spaces through the manipulation of light, and still others propel the sculptures into a motion held in tension with the static frames, the films are not as convincing in their experimentation. When Brancusi gets the film camera out in his studio, filming his friends at dinner, and again when he films friends dancing or his travels through Romania from a train, the result is nevertheless interesting for what it does not achieve. The attempt to integrate sculpture, dancer and film movement for example, shows Brancusi the filmmaker in search of a new language, a synergetic art form. However, the three media rest separate, and Brancusi is unable to create the relationship with the body and film in motion that Maya Deren achieves in A Study in Choreography for the Camera (1945) ten years later. 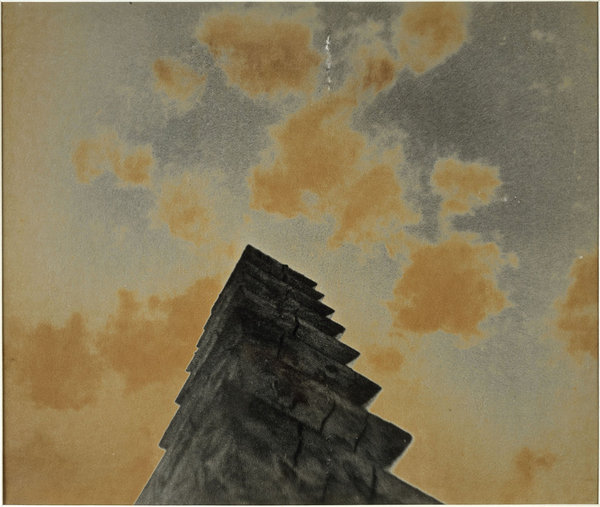 Towards the end of the exhibition, though not necessarily later in his career, Brancusi's films became more interesting. For example, on display is a wonderful film of celebratory fireworks at the Eiffel Tower where once again, the fireworks are a play of light and darkness. And then in the number of films of his La Colonne sans Fin, the works begin to approach some of the questions about the bringing together of documentary recording and the artistic possibilities of filmic construction that defined the theoretical discussions of his time in the 1920s and 1930s. In these works where Brancusi varies the focal lengths, sources of light, framing, and he even works in color, he begins more convincingly to open up a relationship between sculpture and filmmaking.

One of the final pieces in the exhibition is a rare and unusual film by the American avant-garde filmmaker Paul Sharits, Brancusi's Sculptural Ensemble at Tirgu Jiu, (1977-1884). Sharits goes to Romania and documents his visits to the three Brancusi sculptures in rural Tirgu Jiu. Sharits explores the sculptures by moving through the town and allowing the sculptures to come into view from different perspectives, giving a sense of a narrative discovery. The film is aesthetically very beautiful, with its 1970s Kodachrome, and unlike the harshness and confrontation of Sharits' earlier abstract work, the camerawork and editing is lyrical, ultimately producing a film that echoes the infinity of the Endless Column.

Posted by Frances Guerin on 8/8/11
Tags: film sculpture mixed-media photography
RELATED ARTICLES
COMMENTS (0)
ArtSlant has shutdown. The website is currently running in a view-only mode to allow archiving of the content.