Manet, Inventor of the Modern

The only way I could bear the crowds I knew would be at the Musée d’Orsay for the Manet extravaganza was to go with a friend, her twelve-year-old son, and his friend; at least I could go under the illusion that I was on a mission to educate the boys about one of France’s greatest painters. Of course, the boys raced through the exhibition at breakneck speed, while my friend and I wove our way in and around the crowds to devour the luscious paintings, some of which were familiar, others I had never seen in the flesh, and still others I didn’t even know existed.

I was swept up in the size of the exhibition; it was huge in terms of the number of paintings on display as well as the reach of its claims. Though I am not convinced it was fully successful, the exhibition attempted to sketch the world of late nineteenth-century modernity with Manet’s paintings at its center. The often superficial references to those in Manet’s midst — Baudelaire, Zola, Renoir, Monet, Mallarmé, and so on — didn’t fully capture how radical and controversial all of these thinkers, especially Manet, really were. Similarly, to my surprise, there was no mention of the other inventions that were revolutionizing the principles and philosophy of visual representation in Manet’s time: photography and the pre-cinematic. This, in spite of their obvious influence over his aesthetic and working process: the fragmentation of the image, the face in closeup, the consistent use of grey paint, the breech of representation toward realism.

On another level, I enjoyed the sketch of nineteenth-century artistic and intellectual Paris because it left me yearning. I felt like a character in Minuit à Paris (the Woody Allen film I had seen the night before) dreaming of how much better it would have been to live in Manet’s generation. How inspiring to move in this rich cultural moment, to spend my days visiting artists and writers, sitting in Paris cafés discussing politics and culture, and most importantly, not having to go to work! If only ….. 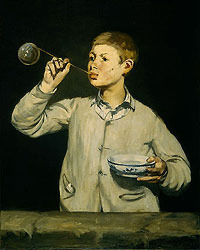 Even though the works on display were predominantly those from French collections, the sheer size of the exhibition makes it impossible to summarize. Nevetheless, there were a few images that completely enchanted and fascinated me. One of my favorites was Les Bulles de Savon (1867) a painting I had never seen before. Like Chardin’s better known portrait of the boys at play, Manet’s is surely engaging with the transience of life, and the ephemerality of the image in modernity. As in so many of Manet’s portraits, the boy is alone against a grey background, performing for an audience that might be on the other side of the wall that separates him from us. With its grey palette articulating luminosity, energy and ephemerality, together with the gesture towards realism of the depiction, I was reminded that this and the other portraits of this period are the siblings of the photographic medium being developed contemporaneously. In the next room, the well-known Le Balcon reinforces the performance of life as representation that is, on Manet’s canvases, painting itself. Painting is a performance, a representation, that is mirrored in the boy blowing bubbles and the three lonely figures on the balcony, figures who are themselves the audience of a spectacle we do not see. Perhaps they watch the (absent) spectacle of modern life. 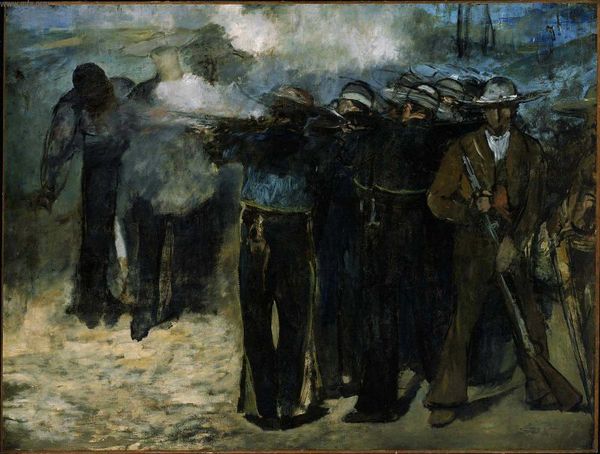 Throughout I was struck by the looseness, and the speed of Manet’s brush stroke. Even his most revered masterpieces are painted with a very fast, and free brush. And there are moments when the technique is so extreme that he makes paint look like a sketch, or alternatively, allows it to verge into abstraction. While the history paintings are under-represented by the exhibition, the one, unfinished version of The Execution of Maximilian (1867) reveals these aspects of Manet’s working process. Even if the work is unfinished, its characteristics are nevertheless similar to the version in the National Gallery in London in which we see the Hapsburg Emperor being executed by the Mexican firing squad. In the version on display in this exhibition, we may not get to see one of the great delights of the London version — the folds of the fabric of the executioners’ trousers — but we see the wonderful abstraction of the rifle smoke that becomes air which turns into the men’s hats, and then merges with the earth in the other direction. T J Clark talks about the blur as the ambiguity of modern life as it is captured in the smoke from the rifles. And in this unfinished version, we find all of the uncertainty and instability of a world at war echoed in the vagueness of an image painted at such a speed.

My favorite moment of the exhibition was when, standing before Manet’s masterpiece, I asked the two twelve-year-old boys whether or not they knew the myth of Olympia? They pointed to her, “Who her?” and giggled. At the end of the exhibition wanting to engage them in some discussion of the paintings, Anne asked what Le Déjeuner sur L’Herbe (1862) and Olympia (1863) had in common? More sniggers, and the response: “They both have a naked lady.” The confrontation of her gaze, the symbolism of the black cat, Olympia’s demi-monde existence as a prostitute, and the critique of colonialism through the presence of the black maid, all of it was lost on these young boys. And it made me wonder; how many men look at these paintings and see the exact same thing: a naked woman? Likewise, I wonder if the excitement and sheer radicality of Manet’s work has disappeared for a contemporary audience? Not for me. If I could face the crowds I would go back and savor more of these extraordinary paintings that still make me want to dive headlong back into the mid-nineteenth century.