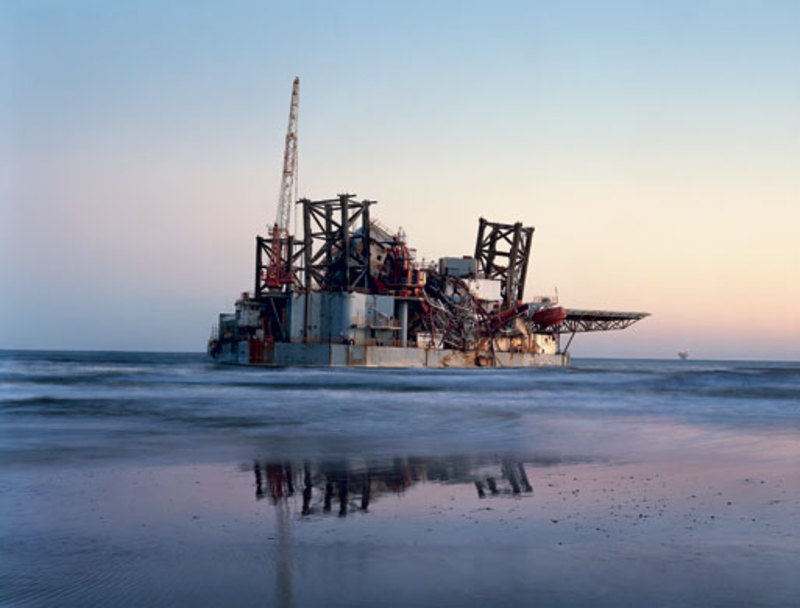 Epstein’s latest photographs, American Power, big, shiny and new, represent the way that “power” in its most extreme and varied forms, is threaded through the very fabric of daily life in the contemporary US. Inspite of their aesthetic appeal, the images are frightening. There is nothing upsetting or shocking about the photographs themselves; on the contrary, they are pristine, meticulously composed, slick and sometimes beautiful photographs. However, what the photograph is and what it shows could not be further away from each other. Inside the highly aestheticized images, we see scary worlds in which, for example, a group of worshipers baptize one of their number with the Rancho Seco nuclear power plant in the background in Herald, California. It is the fact that life is shown to carry on as usual, while power plants, nuclear reactors and all manner of industrial monstrosities spew waste, fumes and poisons that makes these images so upsetting. 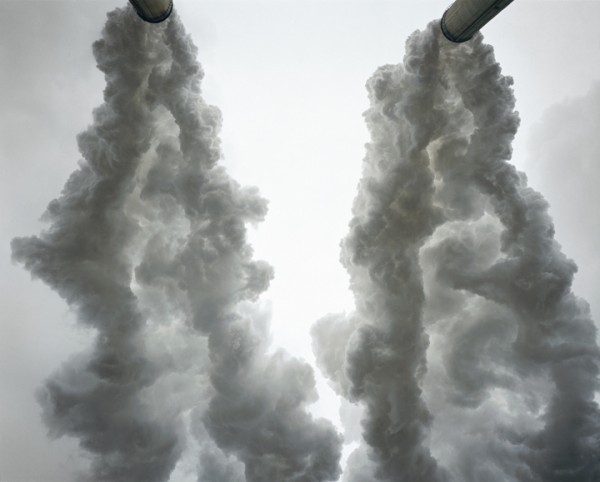 In one of the most difficult images, a man with an artificial leg -- cigarette in hand, his stomach bulging as he chats with his friend, nonchanantly guarding his fishing line -- is not the most prominent element of Fort Pierce Florida, 2005. What matters is the offshore drilling platform in the background. It is not only bigger than the human, but the machinery is centered in the frame, and overwhelms the human. Our first thought when we look at this image is that the men are fishing in the same body of water into which the waste of the oil rig will spill. Does he really think that he will catch fish? And if so, who is going to eat these fish? Probably you and me. Only after being unsettled by the idea of the polluted waters in which he fishes, do we begin to think about the fact that his leg is artificial. And whether or not it is the case, the immediate assumption is that he must be a Vietnam veteran. 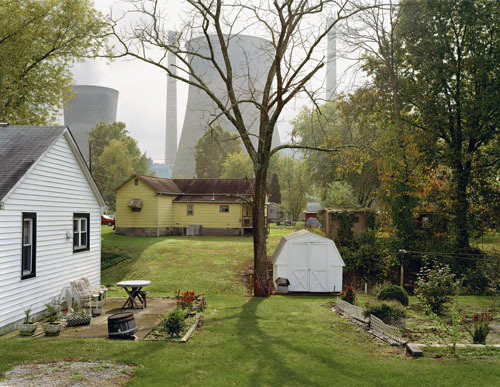 In another striking image, the Amos Coal Power plant is literally the backdrop to a tenderly cared-for yard in Raymond, West Virginia. What is so frightening here is the tension that emerges between the traces of the human that tell of the enormous care and love of home, garden and environment and the promise of deathly waste from the coking plant that will infect the air that these same thoughtful people breathe. In this as in other images, the tensions and contradictions emerge between the photograph and what it pictures. Again, the crisply lit scene, the perfectly composed frame, the clarity of vision become undone by the horror of what lurks in the background of the same scene.

This tension reaches its ultimate articulation in those photographs that resemble — even to the most casual of viewers – the Romantic landscapes of the likes of Caspar David Friedrich. We cannot help but compare the beauty of Turner’s clouds with the Gavin Coal Power Plant. And in the Ocean Warwick Oil Platform off Daupine Island we are not mistaken when we see Caspar David Friedrich’s Eismeer (1824). But whereas in Friedrich’s painting it is nature that triumphs, at war with the world and peacefully at rest, content with itself, in Epstein’s photograph, the victor is of a different ilk altogether. With its saturated blues and purples marking the end of the day, this platform is the monstrosity we have created and left to poison the sea. And thus, in Epstein’s worlds, we have reached a moment when nature will no longer survive the violence of our manipulations. 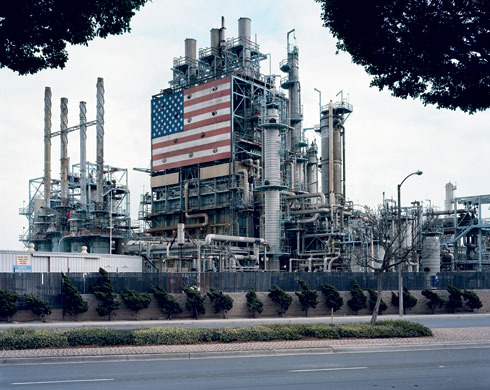 What is so impressive about Epstein’s photographs is that they neither celebrate nor condemn the power and industry that has destroyed the natural environment and the man-made ones we inhabit. Epstein’s refusal to judge or critique comes thanks to the hyperrealism of the images. Their presentation of “what is” enabled by the tension between the aesthetic perfection of the photograph and the devastation that surges within its frames. Similarly, the matter-of-factness of these images comes courtesy of the eternal present that is the American way of life.  My interest in and familiarity with representations of similarly insidious destruction wrought on the environment by industry in the Ruhr Valley in Germany makes the “nowness” of Epstein’s photographs easier to identify. In Germany, similar images are aware of a past in which the industrial was to be celebrated, and a future in which it is to be phased out. However, in Epstein’s photographs there is nothing outside of the present. There is no sense of nostalgia, no sense of anything ever being different, ever, and no call for a different future. This is the way that life is.

Women Jack Tworkov
4/5/09
COMMENTS (0)
ArtSlant has shutdown. The website is currently running in a view-only mode to allow archiving of the content.