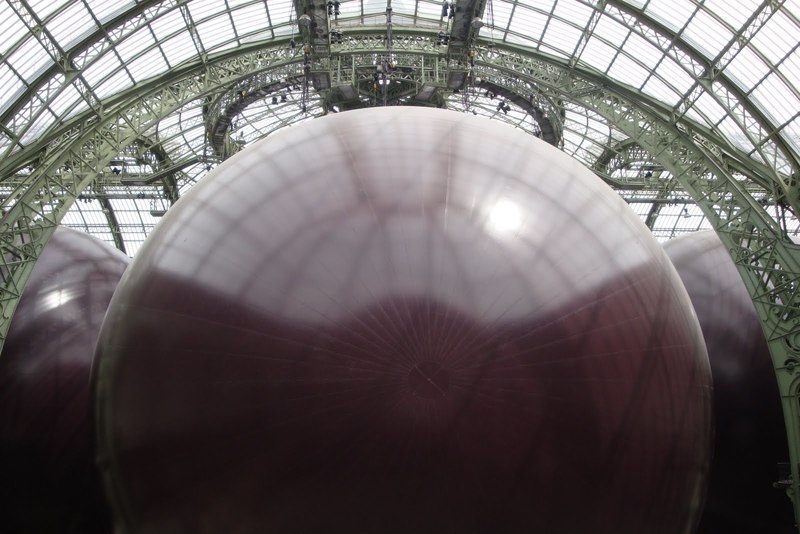 by Frances Guerin
A friend who visited Anish Kapoor’s Leviathan, the latest in the Monumenta series at the Grand Palais, told me that it was “beautiful”. He used words such as “breathtaking”, and “divine” – and had an image of something that would be ethereal, gorgeous, dreamy, something that would give the experience of serenity.
And as I entered the belly of Leviathan, I felt my body swaying, I became nauseous, not knowing where to look, completely disoriented, wanting to find a place to stand; my experience of this mindboggling “sculpture” (if that is what one calls such a creation) was anything but soothing. In fact, I was troubled. This was a monster that could only begin to be described by its title. As I stood back, looking at the entrance, I saw the people coming in, black shadows falling into the void, as if walking involuntarily into the mouth of Moloch. It reminded me of the nightmare of the underground world of Fritz Lang’s Metropolis, only everything was red, creating intensity and destabilization. But Leviathan has a kinship with Lang’s world where everything has gone awry despite the pretence of order.
The seams of the red PVC balloon structure are in many ways the most intriguing parts of Leviathan. Because the seams are the place that we look to for explanation, for order, for a sense of orientation. Of course, it is impossible to find one’s bearings here, because this is a world in which there is a constant unsettling of everything we know; we are enveloped by a not so reassuring red, where color has become tactile and weighs upon us. I read somewhere that Kapoor likes to create structures that remind of the womb, and yes, I think to myself, this is where I am – intrigued, disoriented, wondering how long I need to stay in here before it is time to leave. And then everything changes – the sun comes out and I see the reflection of the iron structure of the roof of the Grand Palais reflected on the now translucent PVC shell that protects me. It is gorgeous. Like a chain reaction, everyone inside lies down. They put their bags under the heads and they lie down to look, to dream, to imagine the world outside of the womb. The monster comes alive, and people’s response to it changes completely. 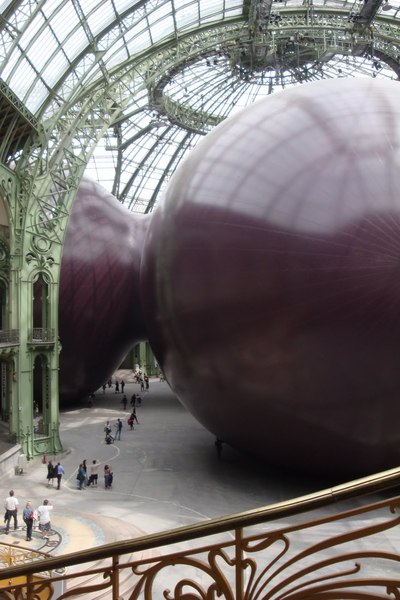 (Image: Anish Kapoor, Leviathan (installation view), 2011, Grand Palais, Paris. Courtesy of artist and Grand Palais)
As in the past Monumenta installations, the Grand Palais and the French Ministry of Culture employ young students to discuss the work with visitors. They explain this mythical, incomprehensible beast to an intrigued and voracious public. One young man tells me that the work is breathing when I look at it and remark on the transformations that take place in the sunlight. He tells me that it’s the red, the unrelenting red, the purity of red that makes me feel lost and troubled; that unnerves me. He wants also to say that Kapoor has created a space of the imagination. And yet, as I take off my jacket because it is so hot, as I nervously look to see who is creating the echoes that reverberate throughout, as I try to find a place to be inside this belly of a beast, I do anything but follow the temptations of my imagination. I am so physically confronted, there is no possibility of transcending the body. At night, he tells me that the PVC balloon looks like cement, because it takes on a density. I wonder if Kapoor knew this would happen at night? How could he have known how it would behave because this was the first time it was ever inflated? In many ways, it is the aleatory, the “onceness” of Leviathan that makes it so mysterious. How can it be so perfect, not a wrinkle, not a flaw in its skin? And how can Kapoor have designed such a structure, not knowing what it would be like, look like, feel like? It’s the technical impossibility of Leviathan that makes it so confounding.
I watched people touch it: everyone did, everyone went up to it, just to make sure it was there, just to make sure it was where we thought it was. Strangely, because of the illusions created by red and the illusion of perspective realized by the seams, the material of Leviathan is not where it appears to be; we are completely deceived, as the PVC lining is further away, on an angle, not perpendicular as it appears. And once people have touched it, ever so cautiously, they step back, leaving it to do what it must, on its own. 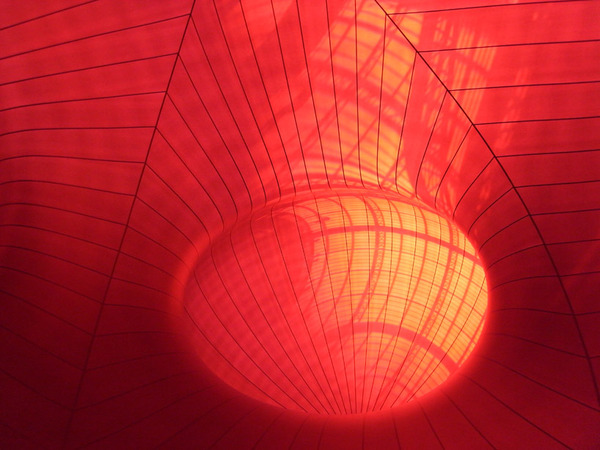 (Image: Anish Kapoor, Leviathan (installation view), 2011, Grand Palais, Paris. Courtesy of artist and designboom)
On the outside, it is a different story. The piece has a life of a different kind: it is imposing, and magnificent. It is magnificent because it sits in the nave of one of the most extraordinary buildings in turn-of-the-century Paris. Almost anything that sits inside this structure cannot help but take on some of the magnificence of the building. But Leviathan on the outside, welcomes the volume, the light, the verticality and simultaneous horizontality of the enormous space. The now purple structure is touched by the lattice work of the ceiling, in reflection, on its skin, making it mysterious once again, but in a gesture of openness and magnificence, where the inside was unsettling and troubling. The outside is still inconceivable because still we cannot see where it begins and ends. And it is inconceivable because it cannot possibly be the skin, the outside of the same structure that we fall into on the inside. Like coming into the world, being born, wide-eyed, there is nothing that connects in there with out here. Nothing.
--Frances Guerin, film historian and writer living in Paris
Posted by Frances Guerin on 5/30/11
Tags: installation
RELATED ARTICLES