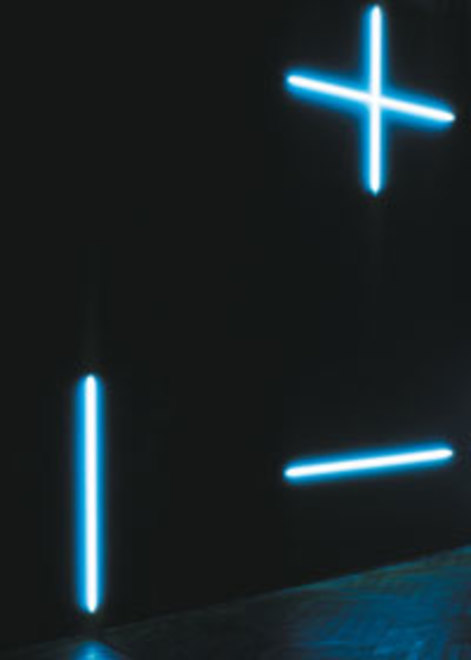 I really wanted to love the new “re-installation” of François Morellet’s work at the Centre Pompidou. However, as hard as I tried, I just couldn’t.  Because as gorgeous as many of the works are, like all light sculptures, their meaning is generated by their definition of space, their rhythms, reflections and refractions of public space. And when installations that at their inception define, articulate, even form castles, cathedrals, and the squares and promenades of Europe, when they are re-installed in the white cube galleries given them at the Centre Pompidou, nothing translates. There was something very staid, almost static, about the exhibition even though I walked around the sixth floor of the museum: I moved, but the work seemed trapped as I looked at piece after piece. I kept thinking how much better it would be to experience these neon lights made intense and beautiful as they transported and guided me through potentially unfathomable public spaces.

That said, there is much about the exhibition that I did enjoy, not least of which was its size. So many of the Pompidou’s exhibitions are overwhelming and exhausting in their size, but the Morellet is small and very manageable. In this sense, it was a delight to explore the various phases of his creative process, and easy to get an overall sense of what is a very coherent body of work. I also enjoyed individual works, sometimes for the aesthetic, at others for their conceptual level, and at still other times for both. A work such as Reflections in water deformed by the spectator, 1964, is inventive and wonderful in so many ways. 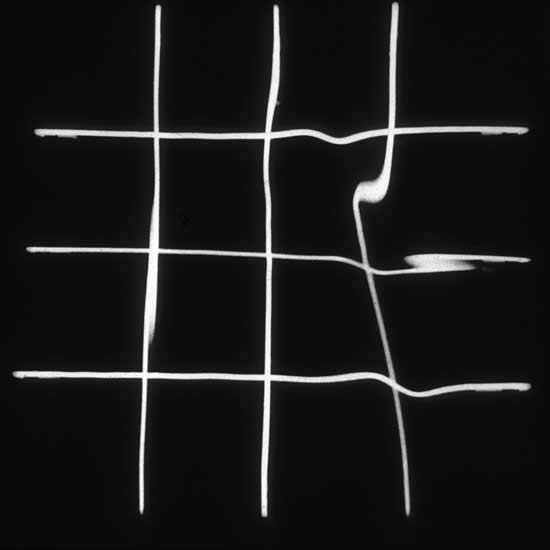 The rigidity of minimalism, the seriousness of conceptual art are disturbed and thrown into disarray by the intervention of the audience as well as the unpredictability, and apparent unruliness of water in motion. What makes this piece so thrilling is the clarity of the artistic proposition even as the piece is technically very complicated.  On the floor, a basin is filled with water, and in it are reflected the lines of a luminous structure suspended from the ceiling. The visitor is invited to move a prop on the right of the basin, thus disturbing the water and deforming the pattern of the light reflection on its surface. Indeed, what this highly sophisticated design and construction somehow declared, yet overridden by the power of the artistic proposition, is the brilliance of Morellet’s work.

The dialogues with art history are seemingly infinite in Morellet’s sculptures. There are the obvious references to Mondrian’s planar compositions on exhibition next door on the 6th Floor. And similarly, the engagement with icons by masters such as Leonardo, Picasso, Delacroix are everywhere made obvious through their transformation and disfiguration by Morellet. In these works such as Delacroix Disfigured (The Death of Sardanapalus), 1989, Morellet gives us reflections of the icon's life in a museum, returning to the sculptural form and aesthetic the disfigurations of the institution, spectators, critics, and all others involved in its exhibition context. And then there is the companionship given Morellet’s work by Nauman and Beuys, and in his wake, the light installations of Robert Irwin and James Turrell. 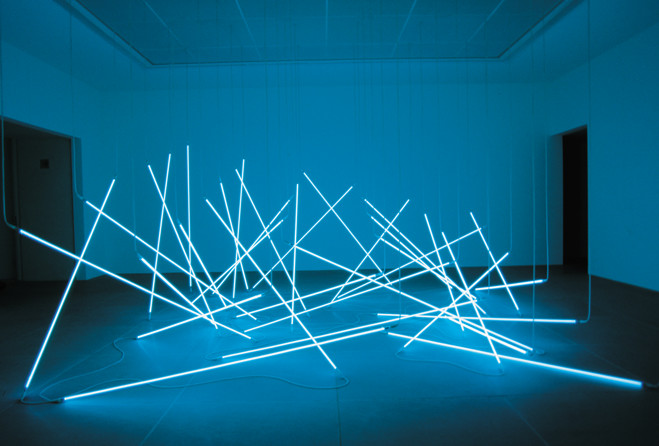 I also enjoyed the feelings of nausea, Morellet’s tendency to take the visitor to the precipice of some kind of convulsion, usually through his or her own interference in the stability of the world as it is given by Morellet. Morellet’s pieces invite us to participate in their process, and then when we do so, pressing buttons that activate multiple neon lights usually forming some kind of right angle compositions, we are given the illusion of full control of the speed of their blinking, and apparently the patterns they make.  I found myself energetically turning the lights on and off, watching the patterns to the point of dizziness and disorientation. And as if this were not enough in itself, what then makes Morellet’s work unique is that, at heart, it has all the seriousness and intellectual profundity of various touchstones in the history of twentieth century art. And so here is a corpus of work that pushes us to physical extremes, while all the time being appealing to the eye, and challenging to the mind.

Posted by Frances Guerin on 3/28/11
Tags: neonlight-sculptures
RELATED ARTICLES
COMMENTS (0)
ArtSlant has shutdown. The website is currently running in a view-only mode to allow archiving of the content.