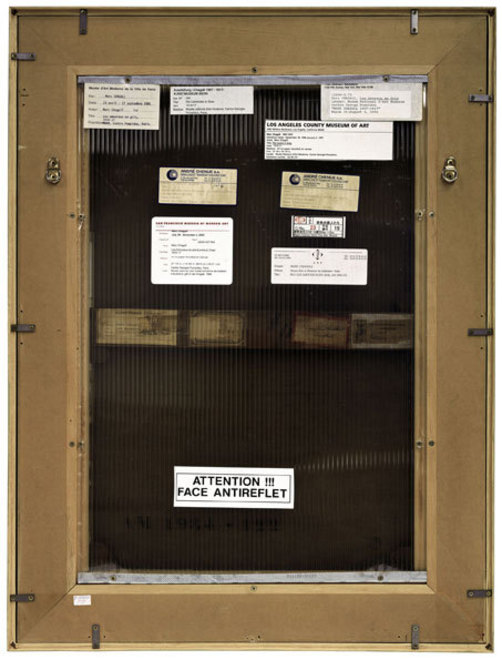 What Cannot Be Seen - Philippe Gronon

Philippe Gronon continues his concern with what cannot be seen in this exhibition of the verso side of paintings by well-known modern masters. For his recent exhibition, Gronon presents his first series of color reproductions of the frame, canvas, labels and markings of fifteen paintings he found in the vaults of two French museums: the Centre Pompidou, Paris, the Musée d'Art Moderne et d'Art Contemporain in Nice, and from private collections. He photographs the verso side of paintings by Constable, Picasso, Modigliani, Bram van Velde and other modern masters without removing them from the vault, digitally enlarges and enhances them, and then re-presents to the exact scale of the original painting. Simultaneously, the digital re-presentation ensures precise replication of every trace of where they have been, who has touched them, when and for what reason. Already, we begin to see Gronon's engagement with issues of photography as (not) a precise reproduction of the object it sees.

The exhibition reminded me of a class in painting conservation I took as an undergraduate. We were taught that the reverse side of the canvas held all the secrets we needed to know about the painting: when it was painted, who owned it, who bought it and sold it, where it was exhibited, for what purpose. Thus, my first response to Gronon's photographs was to see their reverence for what is arguably an important conveyer of meaning in a painting: its context. Today, everyone is interested in the "ideas," the conceptual challenges of painting, and Gronon's photographs remind of the days when art was about something very different. And so, when we see how far and wide Marc Chagall's "Les amoureux en gris" has traveled, all the important museums from Italy to the United States and back again that have exhibited it, we realize its significance in the history of twentieth century art. And the protective measures of added perspex, and backing board permanently tacked on alert us to the fragility, the "value" of what lies on the other side.

The effect of Gronon's photographs is a constant oscillation between seeing the painting's verso in the photograph and imagining the recto that is always refused us. It is a frustrating back and forth between the photographs and the paintings they (do not) depict. No matter how hard and how long we look, we never get to see what's on the other side. I imagine I can see a correspondence where there is none between the gently cursive "On Kawara" on colorless canvas and the Japanese artist's expressionless, conceptual paintings. Gronon's refusal to give any indication of what lies on the recto side of these canvases brings us back to the fact that they are photographs, and that they must be seen as such - two dimensional replications that cannot hope to capture the entirety of the painted work. The eternal mystery nevertheless keeps me imagining.

At some point, we suspend attempts to know the painting via the photograph -Gronon may tempt us with the possibility, but ultimately, all knowledge is denied. And so, defeated, we pause from imagining the recto side of the canvas, and we see the verso as a work of art in and of itself. An untitled painting by Bram van Velde owned by the Centre Pompidou is, for example, striking in its appearance as an old wooden window frame, with what might be mistaken as a white curtain on its other side.

Apparently, Gronon chose the paintings to be photographed on the basis of the aesthetic appearance of the verso side; but even then, they are always more than an abstract image. And yet, the sense of "I have a secret" continues to haunt these photographs. In the top left hand corner of the van Velde image, "Beckett" inscribed in chalk finds us asking, "is that Samuel Beckett? Did he own this image once?" Or did the Centre Pompidou write that when they exhibited it in the recent Samuel Beckett exhibition? The photographs may well stand alone as aesthetic objects, but we can't help coming back to the narrative significance of the labels, markings and protective measures....on our way to finding out what the front side "really" looks like.

These are complex and sophisticated photographs that repay the time spent looking, and not looking - seeing and getting lost in what we wish we could see, but never will.